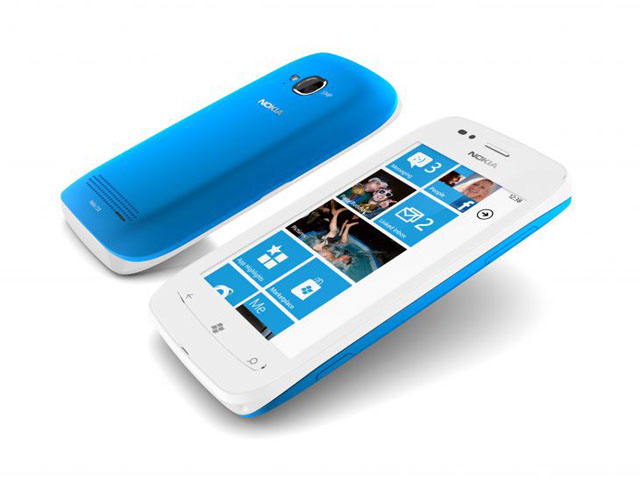 review The 710 is the little brother of the Lumia family. With less powerful specifications, a less flashy design and less hype, it’s hard not to feel that by buying a Lumia 710 instead of a Lumia 800 or even 900, you’re getting, well … less. However, of course the cost is also less; something that may buyers will find appealing. Has Nokia done enough with the 710 to make the Lumia little brother a worthy option at a decent price point? Read on to find out.

Design
The Lumia 710 we reviewed is yet another medium-sized black smartphone with buttons on the bottom of its screen, a speaker grill and logo at the top, volume controls on the side and a better camera on the back. Wow, you might say, this is a phone which looks like everything else on the market. So what’s new? Well, actually, not much. But that doesn’t necessarily matter, when what’s there has been implemented this well.

Over the past several years, Australia’s mobile phone market has been swamped with phones which look more or less just like this one. At a superficial level, many of the smartphones from HTC, Samsung, LG and other manufacturers look relatively similar to the Lumia 710; even down to the rounded corners which the phone boasts on its edges. But there’s a certain build quality which the Lumia 710 and other Nokia phones boast which is quite hard to deny; and some of the other manufacturers don’t always get there.

When you pick up the Lumia 710, it immediately becomes apparent that Nokia has ticked all of those boxes which make the difference between great design for mobile phones and mediocre design. The black of the 3.7″ touchscreen is a nice, deep black, which does much to meld with the surrounding plastic cover. Some smartphone models have over recent years started to submerge buttons below the surface of their cover, sometimes in a non-obvious way. But the Lumia’s buttons are clearly demarcated, easily visible and somewhat inviting.

The edges of the phone are bevelled, and its back is composed of soft, curved plastic. When we reviewed the Samsung Omnia W last week, we found it very comfortable to hold in the hand, and the Lumia 710 takes that sensation to the extreme. With the perfect size, materials and build quality, the 710 is just lovely to hold and use in one hand, and we wish more smartphone vendors would use the kind of materials and implement the kind of build quality which Nokia has here.

The back cover of the 710 can be removed with a fingernail — it just snaps off cleanly — for access to the battery and microSIM card. However, somewhat remarkably, when it does snap back on you won’t really notice the seams. The way the Nokia components fit together is just really nice.

The model we reviewed came in pure black. However, Nokia’s website advertises that the 710 is available also in white, with a variety of interchangeable back covers ranging from blue to white to dark pink and even yellow (see the screenshots below this article). So while the design of the 710 isn’t quite as striking as its big brother, the 800, you can still make the 710 an eye-catcher if you choose to. The phone weighs 126g — about average, although given its lesser specifications we’re disappointed a bit of weight couldn’t have been shaved off — and its 12.5mm thick, with dimensions of 119 x 624mm.

Features
You’re probably not interested in buying a Lumia 710 for the featureset, given that it’s clearly a mid-range smartphone rather than a top-end model like the HTC One X, Lumia 800 or 900, or the upcoming next generation of Samsung releases, not to mention the iPhone. But for what it’s worth, the Lumia 710 doesn’t do too badly in the feature department — it’s good, but not outstanding.

The phone’s 3.7″ display runs at a resolution of 480×800 pixels, and the screen is Corning Gorilla Glass, as is rapidly becoming standard. It runs version 7.5 (Mango) of the Windows Phone 7 operating system, and we don’t expect it to be upgradable to Windows 8, although the phone does feature a single-core 1.4Ghz CPU. It supports HSDPA (14.4Mbps) speeds in Australia has 8GB of on-board storage space (but can’t take a micro-SD card for expansion), and has 512MB of memory.

In terms of network support, you’re not going to face any problems with the Lumia 710 in Australia, as it supports all of the nation’s most popular frequencies — 850MHz, 900Mhz, 2100MHz and so on. The battery is rated at 1300 mAh, which Nokia says allows a maximum 3G ‘talk’ time of 7.6 hours, or if you’re playing video through the 710, 6 hours. Maximum standby time is 400 hours. After playing video for an hour or so through the phone, its battery was only depleted to a modest degree, meaning we have no reason to be concerned about its battery life at this stage.

All of this is pretty standard for a mid-range Windows Phone 7 or Android phone being sold in Australia at the moment. But perhaps the one aspect we are a little disappointed by when it comes to the Lumia 710 is the phone’s camera, which is rated at only five megapixels. Although, as we’ll discuss later, the camera is definitely adequate for the phone’s price range, we suspect some buyers will be turned off by the low megapixel rating, in an age where smartphone cameras are heading for the megapixel stratosphere.

Some additional software features are found on the Lumia 710 which aren’t found on other non-Nokia Windows Phone 7 devices. Nokia’s Drive (navigation), Music (self-explanatory, really) and Maps (mapping) applications are all bundled onto the phone by default. We think they’re OK, but not really outstanding or worth differentiating between Windows-based phones to get.

Performance
In terms of the Lumia 710’s performance, there’s only a few things you’re likely to want to know.

Firstly, as with virtually every Windows Phone 7-based smartphone in 2012, the phone’s processing power is more than adequate to keep up with its user interface. Don’t worry about things like the speed of web browsing, the speeds of apps or other user interface-related issues; it’s all good, including playing HD videos and so on. The interface lag issues which some phones have experienced in the past are increasingly going to be a thing of the past over the next year, we suspect.

Secondly, the performance of the Lumia 710’s camera, in both good and bad light conditions, is also solid for its megapixel rating, as one would expect from Nokia, which has long had very strong performance when it comes to cameras on phones. Sure, the camera is only a five megapixel model — but you’ll be surprised how good the Lumia 710’s photos are.

Having said this, there are some caveats with respect to the phone’s camera. It’s slow to focus, which we found resulted in some blurry shots if we weren’t careful, and occasionally some of the colours can be a little but muted. You can work around these issues if you take your time taking shots, and some colour correction can obviously be done PC-side via Photoshop or similar, but we’d be remiss not to mention these issues. This is a phone which you should be able to just pop out of your pocket and quickly take a shot with, but the truth is it’s not ideal for that purpose.

There were also some other aspects of the Lumia 710 we were concerned about.

The phone’s buttons can be a little small and hard to press, and you don’t get the satisfying tactile feedback from them that you get on most Samsung and HTC phones these days. The way Nokia has implemented its hardware buttons looks nice, but in practice is less functional than it could be and compared with rivals, is a little bit dated. The buttons are a bit finicky, and we suspect many users will get tired of them in the long term.

Secondly, as with so many smartphones at the moment, the sound quality from its speakers isn’t fantastic if you’re watching videos or listening to audio without headphones. The Lumia 710’s sound is a bit tinny, and most of it emanates from the speaker on its back, making it a bit hard to hear. We’re sure that in a noisy environment like a bar or café, it would be even more difficult. Having said that, the quality of its sound for normal purposes like calling is fine.

One final aspect of the Lumia 710’s performance bears mentioning: It’s price. With a cost of $326 outright through JB Hi-Fi, and available for zero dollars up-front on a $30 monthly plan from the likes of Optus and Virgin, for what you get with the Lumia 710, it’s a pretty decently priced little phone, and certainly one of the winners in that price range.

Conclusion
The Lumia 710 is a moderately powerful smartphone offering very decent specifications and a nice design, paired with solid build quality and a good camera. For its cost, it’s one of the top smartphones in its mid-range category and it can be one of the most stylish, when paired with a colourful case. Most people won’t miss its lack of high-end features, and they’ll likely be thanking Nokia for not hitting their hip pocket too hard.

If you’re in the market for an affordable Windows Phone 7-based phone, or even if you’re running an older Android or iPhone and are vaguely interested in testing out Microsoft’s operating system for a year or so, you can’t go past the Lumia 710. It’s an inexpensive phone offering most of the features people want in 2012, with a decent basting of style in the package. Just don’t expect it to compete with high-end models, and you won’t be disappointed.