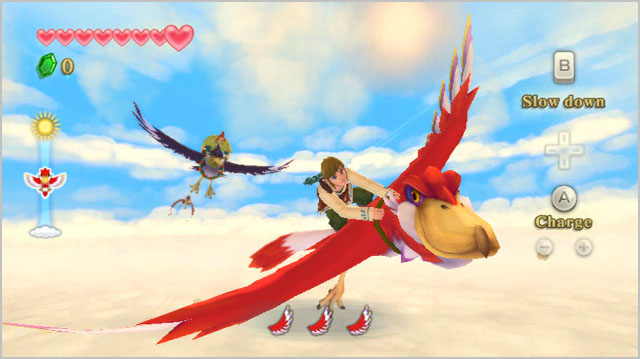 review Zelda’s in trouble again and the chosen one Link is the only hero who can rescue her, despite the tribulations of puberty being an ongoing concern. The Legend of Zelda: Skyward Sword takes its time to warm up, but when it does, there’s a lot to like about Nintendo’s last serious hurrah on the Wii.

Overview
I count myself fortunate that I can enjoy the myriad complexities of Skyrim and yet still sit down and find fun in the comparatively lightweight experience offered by The Legend of Zelda: Skyward.

Nintendo, borrowing from the playbook of its Super Mario series, has you chasing the elfin Zelda from dungeon to dungeon in an attempt to rescue her – at least that’s the impression you start out with. You play the role of awkward teen and Knight Academy novice Link, the only person in possession of a rare crimson “Loftwing”, or riding bird, and the fabled Goddess Sword, capably wrenched from its ancient plinth in daring Camelot fashion.

As with almost all previous games in the series, Skyward Sword isn’t a continuation, but a reboot featuring the same characters. We’re transported to an alternate dimension where enough constants exist to keep the escapades familiar, with sufficient differences that we’re not playing the same game in a slightly spicier marinade.

Skyward Sword isn’t immediately rewarding; the treats offered in the early stages of the game are scraps compared to the mid/late-game. For a good five to seven hours, there’s a lot of repetition and tedium, filler fetch quests and wasted minutes riding the clouds on your Loftwing. The situation does improve, but it’s entirely dependent on how long you’re willing to indulge Nintendo’s designers.

Speaking of design, if there are three techniques Nintendo’s mastered over the two and half decades of Zelda games, it’s layering gameplay, reusing content and hiding tantalising goodies in plain, but unreachable, sight. Ledges and chests will mock you from secure locations you’ll eventually penetrate thanks to bombs, digging gloves and a grapple (or Clawshot). Leaving an area uncleared the first time round will annoy completionists, but it’s a core element of the Zelda experience.

Nintendo’s also done a solid job of dressing up Skyward Sword’s linear adventure with what I can only describe as stuff. Hidden locations with reward-dispensing mini-games will keep you busy if you want a break from the story. Incremental item upgrades to strengthen your shield or amp up your slingshot add a traditional role-playing flavour previous games failed to provide in sufficient quantities. “Sword mowing” — cutting grass with a sword, in the finest Japanese historical tradition — continues to be a surprisingly lucrative occupation.

Ah yes, sword-fighting. If my Infinity Blade II review told you anything, it’s that I don’t want my input method to be the primary source of failure – the player’s skill level should be the deciding factor. Even with the massive strides Nintendo has taken to get its Wii Remote to act with your best intentions in mind, you’ll still shake your head when Link’s swordplay poorly reflects what your hands are actually doing.

This is more an observation that motion controls still have a ways to go, not a serious criticism of the game, as it handles the important aspects with generalised inputs, such as flicking the Nunchuk to block (which I found very satisfying). Swiping the remote will, 95 per cent of the time, result in a sword slash of some description.

Skyward Sword’s boss fights are as tricky as ever, requiring a puzzle-orientated mind to figure them out. If you’re not up for unravelling them yourself, you can lock onto your opponent and call upon “Fi”, the Goddess Sword’s science-fiction inspired guardian. Fi will deliver a sterile assessment of the targeted creature’s capabilities and weaknesses, a feature which easily makes my list of the game’s best.

Jumping and climbing are handled automatically, boiling potentially frustrating platforming segments down into manageable 3D puzzles. Just push the Nunchuk stick in the direction of a sensibly-sized gap and Link will do the rest. Snagging an overhead ledge requires additional input from the A button, but otherwise, it’s never a source of peripheral-tossing rage.

The nitty gritty: Play Asia‘s out of stock, but the ever-reliable OzGameShop is selling the game for $49.99. Locally, JB Hi-Fi’s offer of $79 beats out EB Games’ whopping $98. If you don’t own a Remote Plus or Motion Plus adaptor, add that to the shopping list. For the adaptor alone, most places stick closely to the $30 mark, while the remotes range from $59 to $68. Going to OzGameshop will shave a few more dollars of these prices.

My recommendation is that if you already have a remote, just get the adaptor. I was concerned about the additional weight and potential awkwardness from the remote’s extended length, but after an hour or so of play, I didn’t find either concern valid. Whatever you do, don’t go the eBay route – most if not all of the third-party alternatives use cheap sensors. You might get lucky with a decent one, but if you want to avoid disappointment, go with the official gear.

Conclusion
If you’re reading this review, you probably know what Zelda is by now. Skyward Sword is more of the same — reworked, and polished. My two major criticisms of the game are that it takes forever to get to the really good bits and the game plays it too safe with its admittedly well-trodden formula. If, like me, you’re not a Nintendo diehard willing to stick with a Zelda game until your bones are bleached white by the inevitable nuclear war of the 30th century, losing interest a few hours in is a distinct possibility. This links up somewhat with my second concern – the gameplay – which, while enhanced by the heavily motion-dependant combat and puzzles, never seriously engages those after a deeper role-playing experience.

Logan Booker is the for Kotaku Australia. From Monday to Friday, Logan operates a two-man indie game studio based in Melbourne. He’s previously worked as a game designer at Tantalus, writer for Firemint and editor of Atomic.

Logan Booker is the weekend editor for Kotaku Australia. From Monday to Friday, Logan operates a two-man indie game studio based in Melbourne. He’s previously worked as a game designer at Tantalus Media, writer for Firemint and editor of Atomic.