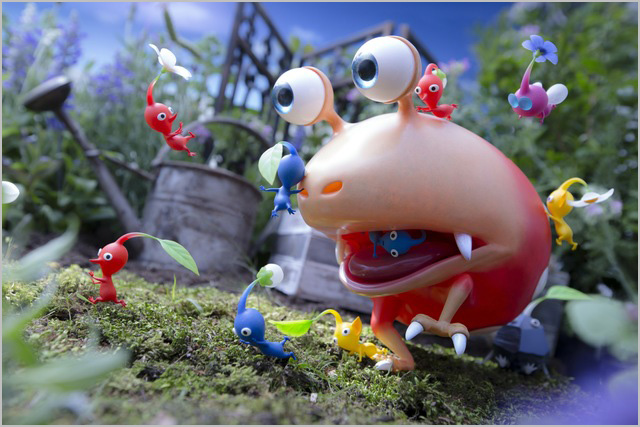 review Fans and critics alike are all too aware of the challenges that Nintendo has faced with getting the Wii U into households. Everyone seems to have a different idea of why this is the case, but one of the popular thoughts is that there’s a lack of ‘must-have’ exclusives and Nintendo-developed games.

Pikmin 3, to listen to the hype, is the first game that fits that much-needed bill of “system seller” for the Wii U. Is it, though? Yes, but critically, also, no. Pikmin 3 is a very pleasant game, but it does reveal that Nintendo is still struggling to come to grips with the nature of HD development.

I want to focus in on that statement a little first before I move on to how Pikmin plays. Having come from games like The Last Of Us, Ni No Kuni, Halo 4 and other breathtakingly beautiful games on the PS3 and Xbox 360, Pikmin 3 looks more like a HD remake than a legitimate current-generation game. Parts of the game look spectacular – the character models are detailed and beautifully animated, but in other areas you can tell that Nintendo hasn’t quite got the HD asset library together yet. Environments are a strange mesh of detailed plants and objects when they’re central to the game, and then messily-textured and quite blurry objects for the less critical ones. The water are fire effects are gorgeous because players will focus on those when they’re playing. The grassy and ground textures are less impressive because they’re less directly involved in the game.

It’s almost like Nintendo took the character models and environments of the original Pikmin games, and was in the process of updating them to the HD generation, but ran slightly short of time and so sent the game out with the priorities in place, but the “nice-to-haves” still a work in progress. While I am not usually usually a fan on focusing on the technical elements of a game when reviewing it, when you consider that Pikmin 3 is meant to be a system seller, the fact that it is still clearly behind the best work on other consoles on a technical basis makes it difficult to market as in that role.

Technicalities aside, the artistic aesthetic of the game is both superb and consistent, and once you’ve sat down with Pikmin for an hour or two, its charm becomes irresistible. Given that there are swarms of them on screen at once, the Pikmin have a bright and happy personality that fits in perfectly with Nintendo’s typical Disney-like theme. The world itself is visionary and captures perfectly the concept of a household garden filled with everyday objects that become puzzles to excite the imagination. Pikmin as a series has always had something of an environmental message to it, and this game makes a strong statement as well, with household junk standing between the space faring heroes stranded in the environment and being able to collect enough food to bring back to their dying home planet.

Nintendo will get there with the technicalities, but while Pikmin will not be the most visually complex and detailed game that it produces on the Wii U and while the developers are clearly struggling with HD, it is good to see that the folks working at the House of Mario haven’t lose their sense of fun and humour. I can only hope that enough consumers can look past the relative simplicity of Pikmin 3 to give it a go.

That said, there’s a few weird quirks with the gameplay too that show Nintendo hasn’t quite cottoned on to using its own hardware. Pikmin 3 is a light strategy game, and players directly command the Pikmin to attack enemies, pick up objects and navigate past obstacles using an aiming crosshair that appears on the screen. Problem is, it doesn’t play very well on the Wii U gamepad, at all. Using the Wii U controller sticks is an exercise in frustration thanks to the cursor movement being far too sticky. Plug in a standard Wiimote and Nunchuk and suddenly the game plays like a dream, but unfortunately you can’t do this for off-TV play and therefore that feature is next to useless.

The gamepad’s screen is used as a map and a menu system, and there’s a couple of gimmicks that are fun with the pad, like the in-game camera working by panning the gamepad around, but Pikmin 3 is the least inspired use of the ‘innovation’ that Nintendo has been touting about this console, and I think it says a lot that the most anticipated game on the Wii U could have been played perfectly comfortably on either of the other consoles.

The Wii U’s software features are used to better effect. The game ties in to the MiiVerse community natively, allowing people to post comments with photos directly from the game. As a consequence, the Pikmin community is one of the most fun (albeit spoiler-filled) communities of all on MiiVerse. This game has the kind of charm that encourages people to simply play with it, and seeing the results of that play is enough to want to join in the fun yourself.

Pikmin is also one of Nintendo’s most creative franchises, and that in itself makes it worth a look for anyone burned out on minigames and platformers. As a light strategy game players are tasked with tracking down fruit in order to survive, and completing a range of specific missions involving using the Pikmin both to solve puzzles and take down bosses. Each Pikmin type has a different special ability – some are immune to fire, others can swim around and others are able to shatter glass with their rock-hard bodies.

The majority of the game is involved with figuring out how to utilize each Pikmin type to maximise the returns and defeat the enemies in the most efficient ways possible. Being in command of hordes of them, and being able to command a range of different Pikmin types at once opens up a wide range of different paths through the game, and that open approach to gameplay is addictive; there are far too few games that give players genuine choice for how they approach challenges that a game throws at people. Especially when those challenges are puzzle-based in nature and it’s difficult as a programming task to give players a range of possible solutions to each individual puzzle.

As is common with many Nintendo games post-Metroid, there are parts of each environment that are locked out at the start of the game, but you’ll be coming back to them later on with new capabilities and the knowledge that there are going to be some nice rewards behind finally circumventing that obstacle. This structure is clever because it creates a sense of exploration while also effectively hiding how small some of the environments really are.

Nintendo has also chosen to give players strict time limits with which to operate – players can only explore during a short daylight period. If they’re not back safely home come nightfall, the entire Pikmin horde is going to be eaten up by some nocturnal monsters. This prevents players from venturing too far from the home base, again allowing Nintendo to use and reuse small plots of land and fill those filled with wonder and challenge, rather than feel compelled to create giant, epic worlds for players to explore.

So Pikmin 3 isn’t the massive game that we might have hoped for. It’s a load of fun, and the charm is irresistible, but looking past that is a game that is part of a franchise that isn’t quite in Nintendo’s top-tier. That’s not to take anything away from the game, because it is a lot of fun and comes recommended wholeheartedly, it’s just not the killer app that some might have hoped it would be.