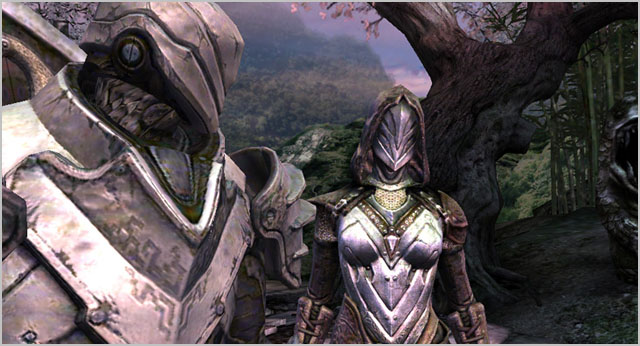 review Frenetic combat and perpetual dungeon-delving are compromised by a clumsy interface and inconsistent gesture recognition in Infinity Blade II, a hack-and-slash RPG for iOS. However, if you can handle the repetitive content and temperamental responsiveness, an enjoyable, if grating experience lies beyond.

Overview
The best way to describe Infinity Blade II is a melding of Super Punch-Out! and Diablo. The player, as the undying warrior Siris, must build his strength, magic and arsenal of equipment by endlessly pillaging the lair of the immortal God King and slaying his minions, known as “Titans”. Your eventual task is to free the mysterious “Worker” by slaying the powerful Titans that protect him.

The conceit of the Infinity Blade series is the “rebirth”, or resurrection, of the player after he defeats, or falls to, a boss Titan or the God King himself. Each time you kill the God King, the Titans get stronger and the treasures greater, while the environments remain the same. Infinity Blade II mixes up the formula by offering alternate paths, randomised monsters and the aforementioned guardian Titans.

Without the benefit of Brandon Sanderson’s well-reviewed novella, Awakening, Infinity Blade II’s story will appear contrived. The dialogue paints its picture with broad, melodramatic stokes that are too vague to seriously engage. What will compel you to continually explore, and re-explore Infinity Blade II’s world are the multiple paths and gated content that only open after several play-throughs.

Combat, where you’ll spend the majority of your time, involves swiping at opponents in a Fruit Ninja-like fashion, with the added need to dodge, parry or block their assaults. Exaggerated attack animations provide you with “tells” as to the type of punishment your enemy is about to dish out and learning these is a major part of the experience. Complete enough evasive manoeuvres and your enemy will drop its guard, allowing you to retaliate. A “Super” move and variety of spells – all damaging, except for a single heal – help to spice up this exchange.

Unlike the first game, Infinity Blade II caters to a number of combat styles – two-handed, dual-wielding and sword and shield. Each has its idiosyncrasies; enough so that mastering one means little when taking up the others. Your gear can be improved upon using gems, to enhance your health and defence values or add special abilities, such as health gains on successful combos.

Chair’s place among iOS’ most gorgeous titles – Real Racing 2, The Dark Meadow and Galaxy On Fire 2, to name a few – is well-deserved. Powered by Epic’s Unreal Engine, textures are crisp, colours vibrant and animations fluid – though I’m more inclined to give credit to Chair’s artists than Epic’s programmers.

Tainting what goodness exists, however, is the haphazard gesture recognition. All too often, my desperate, yet calculated attempts to parry would go unnoticed by the game, leaving my seasoned warrior to stand, befuddled, as his ludicrously-sized opponent pummelled him, literally, into another life. I don’t know if the fault lies in the software or hardware, but the touch controls are just not good enough for a game so dependent on reflex and split-second timing. It’s easily the game’s biggest flaw – big enough to dwarf its positives in my mind.

One of the game’s other failings is its inventory screen, a cramped and counter-intuitive affair. Sliding between weapons, armours and potions, or trying to figure out what you have equipped, is akin to rummaging through a giant box of Lego with your index finger. There’s no concise way to see all the gear you have equipped and it’s entirely possible to purchase items accidentally, despite having the “Inventory” category selected over “All” or “Store”. This is inexcusable.

The soundtrack is serviceable and the effects meaty enough to successfully convey the cacophony of combat, but, if you’re like me, you’ll keep the noise off to get a bit more out of the battery.

The nitty gritty: Infinity Blade II is available on the App Store for $7.49. If you’ve played the first game and are dying to play the second, or this review has somehow ignited a primordial need to indulge in its pleasures, wait for it to go on sale, if you can. Infinity Blade II was played on a jailbroken iPhone 4 16GB running iOS 4.2.1.

Yet, somehow, Infinity Blade II is a hard game to recommend without serious reservations. If you don’t mind the lack of precision controls, the awkward inventory management and repetitive environments and gameplay, then hours of enjoyment await. On the other hand, if you have doubts, find a friend who owns the game and try it out first.

Logan Booker is the weekend editor for Kotaku Australia. From Monday to Friday, Logan operates a two-man indie game studio based in Melbourne. He’s previously worked as a game designer at Tantalus Media, writer for Firemint and editor of Atomic. Renai LeMay also contributed to this article.