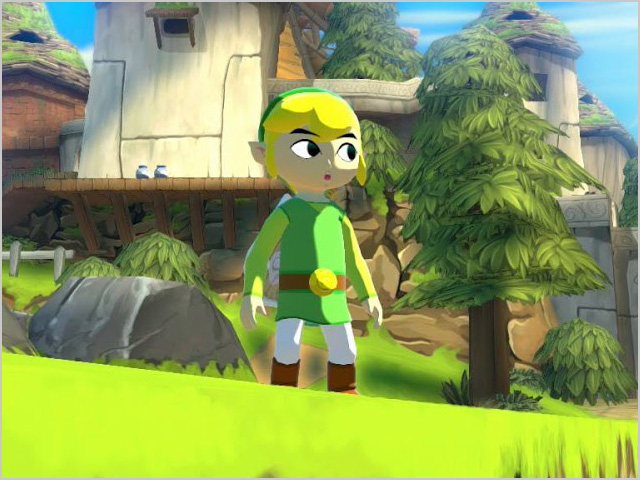 review Since its unveiling at Nintendo Direct in January, I couldn’t help but feel a remake of Nintendo’s Game Cube classic, The Legend of Zelda: The Wind Waker, was a bit pointless. Numerous other titles could have used the high-definition treatment and Wind Waker’s original release presentation holds up better than most games of its era.

Upon actually playing, it appears Wind Waker HD’s purpose is not the implied ocular majesty but to appeal to those who might not have had the opportunity to play the game previously without sacrificing the integrity of the source material for people who remember it fondly. Considering my fondness for the original, I can get behind showcasing the glory of the game to new audiences.

Fans of the original can customize their experience to be tremendously fresh or a nostalgic one with a pretty coat of paint. The more challenging Hero Mode and ability to control much of the game in first person can create a very different experience than was possible back when the game first released. Anyone who never played Wind Waker before, meanwhile, now has the perfect excuse to buy it regardless of what’s on the horizon for Wii U; there’s very little that’s better value than this game. Say what you will about remakes, but Wind Waker HD is one of the most encompassing adventures out there.

If you’ve never sailed the Great Sea before, Wind Waker is the tale of an ordinary boy thrust into becoming a legend in an oceanic world for being in the wrong place at the wrong time. It plays off many of the typical Zelda concepts but combines them with its own innovations and tweaks to make something unprecedented. Dungeons buck the typical formula of providing players with a new gadget and then forcing them to use it over and over again. Instead, Wind Waker finds ways to keep Link’s entire arsenal relevant from start to finish. Small touches like being able to wield the weapons of downed foes or turn them into projectiles and a timing-based parry system allow brawls with even petty foes to remain exciting. Objectives are clear but rarely shoved down your throat, encouraging the player to explore for themselves. It’s a vibe that owes as much to the open-ended 1986 original as it does the modern story-driven action game.

Half the thrill of Wind Waker is exploring the Great Sea at your own pace instead of hastening the plot. Though the amount of genuine hotspots is slim across the wide oceans, the player is free to stop the boat to swipe treasure from submarines, skirmish with pirates, explore caverns, or meet four-armed fairies. The boat is now the perfect speed to delve into adventure without tedium while still affording time for the player to reflect, consult their sea chart, or view the logs of fellow explorers on the way. Wind Waker is that exceptional game with an imposed central narrative but enough freedom to create your own stories within the world.

Though there aren’t many islands that warrant multiple visits once you’ve raided their treasure, there is plenty to do on the two main islands that will last for many hours of questing in themselves. Nearly everyone on those islands has some sort of personality, backstory, or philosophical lesson to share. Some even experience simplified character arcs as the plot develops and the player solves sidequests. In stark contrast to the expressive colour palette, much of this is rather subtle and easy to skim over. You can make a point of absorbing all the lore and hidden depth the seas have to offer or simply go about your business in pursuit of popcorn entertainment.

While Wind Waker HD does not offer much in the way of new content, it polishes the game in so many regards that the original is rendered obsolete. The most constructive of these is the freedom to sail the sea without constantly changing directions – something that greatly annoyed people back in the day.

Other mundane tasks such as swinging via the grappling hook, landing with the Deku Leaf, and firing bombs are made infinitely more efficient here. Even the gyroscope controls added in with the Wii U Game Pad legitimately aids with aiming. The few obscure objectives also become less cryptic thanks to minor dialogue adjustments and the ability to re-read the wise words of the local fish at will instead of needing to track them down each time you need a refresher. None of the changes come at the cost of immersion or difficulty; most alterations make this edition objectively superior unless you’re a fan of monotony.

There’s also something to be said for the Miiverse communication. As you go about your business, you’ll collect a multitude of Tingle Bottles, which contain messages and in-game screenshots from other players. While certainly not the most ambitious system I’ve seen, many will find value in exchanging information with each other and reading the logs of fellow adventurers. Naturally, the quality of these messages will be reflective of the community, but in a world rich with secrets and minute details, distanced companionship has serious potential.

The Game Pad also seems like its additions would be superfluous but the implementation makes countless aspects of the game that much more comfortable for both newcomers and veterans. While I’ve never been a fan of simply dumping the menu screen content onto the Game Pad, Wind Waker HD meshes well with this approach thanks to the design of sailing. Best of all, the Wind Waker is mapped to its own button and numerous details like showing the list of the songs you’ve unlocked while conducting cut down on dullness. Hiding the gratuitous information from the TV screen allows for greater immersion in the game’s striking vistas. I’d venture to say item usage has never been as efficient in the entire franchise.

The most controversial change is likely the new art style that deviates a tad from the original cel-shaded look with is bright bloom and altered lighting effects. Of course, the visuals were nowhere near universally praised before, so in some perverse way they might be truer to the spirit of the original. I find the new look is captured far better in motion than in screenshots. The details are also highly reliant on the environment you’re in as specific areas feel nearly identical to the original while others seem like a completely different game. The remastered soundtrack is a nice touch, though it would have been preferable for every track to get the treatment.

Between the lick of paint and wealth of gameplay refinements, Wind Waker HD seems more like the actualisation of the concept Nintendo could not fully achieve in 2002 than the high-definition upgrade it is billed as. An extra dungeon or two might have catered better to the desires of hardcore fans, but this version systematically improves the flow of the game and makes getting lost at sea a more thrilling proposition than ever. If you’ve never played Wind Waker before, this remaster is genuinely worth buying a Wii U for.