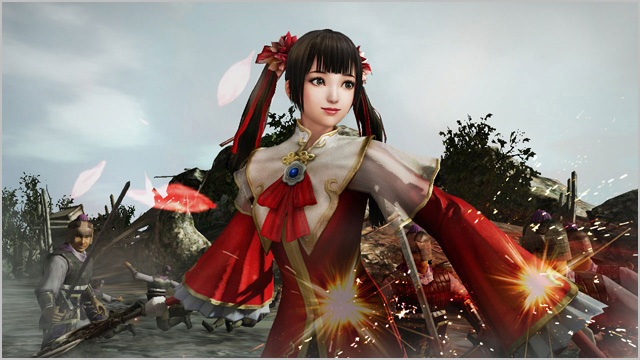 review The Dynasty Warriors franchise has fascinated me, from a gaming culture point of view. Here is a game that in its homeland of Japan consistently rates both with the critics and on the charts, and yet when it is released in the west there is always, inevitably, a vocal group decrying the series as repetitive and critical that it “hasn’t evolved since the PS2 era.”

I have absolutely no idea what game these people are playing, and in fact I sincerely doubt they’ve played any of the recent games at all before making those assessments. Dynasty Warriors 8 is an entirely different game to its predecessor, and an order of magnitude different to what the series looked like before Atsushi Miyauchi took the series reins with Dynasty Warriors 7.

Miyauchi is the best thing that could have happened to Omega Force. Taking the basic concept of “1 Vs. 1000” that the Warriors games have always built on, Dynasty Warriors 8 injects the engine with real smarts and a surprising subteltey that will give veterans some new things to think of. Chief among those is a “rock-paper-scissors” type structure where some weapon types enjoy advantages and disadvantages over others. On the lower difficulty levels it doesn’t matter so much; some basic button mashing and a sense of timing will get players through even an unfavourable weapon match-up. On the higher difficulty levels players are going to need to be strategic about the way they use their weapons.

It’s not immediately obvious the effect that has on the battlefield, but as I ramped up the difficulty level I started to notice that I was being far more strategic about how I moved around to tackle objectives; looking to shore up defences to ensure that I had allies around that could help to make the final push towards an objective that I knew would be a difficult one. The battles will be familiar to Dynasty Warriors veterans, but they have been tweaked just enough that they offer players something new to look at as well.

And there are far more characters in this game. There’s 77 now, and while we’re not talking about a fighting game where each character is markedly different to the others, there is enough variations between each of them that playing with them all is anything but tiring. Between messing with all the characters, as well as the variety of missions and game modes on offer, Dynasty Warriors 8 is also the most full-featured package the series has ever seen. Given that I’ve spent over 100 hours in some of these games in the past – Warriors Orochi 3 and Samurai Warriors 3 for instance – the prospect of an even bigger game that I’ll be working through for weeks yet despite plunging through a great deal of its content already is simultaneously terrifying and exciting.

The Warriors franchise has always been about cinematic on-screen action, however, and Dynasty Warriors 8 tweaks things ever so slightly in this, its traditionally strongest feature. The engine has been tweaked to reduce the manageable pop-in issues that all Warriors games just that little bit more. When there are hundreds of characters being rendered at once on large battlefields there will always be some pop-in, but in this game it’s much less noticeable then ever before, and certainly not something that affects the gameplay.

More importantly, once the weapons start swinging, Dynasty Warriors 8 is an explosion of fluid, graceful melee combat. Like the best Chinese action films, the heroes of the Warriors games float across the battlefield while elegantly slicing through the hordes. It’s visceral, but the transitions between the various attacks are so slick that you really do feel like an empowered superhero; especially once you’ve figured out how to string out complex attack patterns.

And then there’s the fact that the game is based on real history, real battles and real people. It’s a true story that I was inspired to read Romance of the Three Kingdoms after playing Dynasty Warriors for the first time, and now I’m an avid fan of ancient Chinese history. Similarly Samurai Warriors introduced me to Sengoku-era Japanese history, and now I’m well versed in that indeed.

It sounds silly, but the Warriors games offer genuine educational potential for people who are so inclined. Sure it’s very over the top and exaggerated in the game, but there is an encyclopedia on the disc which goes into more depth about the history, and Wikipedia is just a few clicks away after that. From there you’ll have an idea on the textbooks and history authors that you’ll need to check out to know more. For many none of this will matter, but for people with an interest in history, the authenticity of Dynasty Warriors is compelling.

Now, one problem that the Warriors series would face is, if it stuck to the historical material the games really wouldn’t change, because the series has already covered everything of note from the Romance of The Three Kingdoms text. In response the team has started to implement original scenarios and the kind of ‘what if’ situations that military historians tend to enjoy getting into. These are clearly marked in the game to not confuse the authenticity, but it’s nice to see the series branching out into something a little different in terms of narrative for the benefit of series veterans.

Will Dynasty Warriors 8 convert the kind of person who is inclined to dismiss a game without playing it first? Sadly, no. Is it the finest example of the series to date and does it deserve to be given a fair go by everyone? Absolutely. It’s incredible.