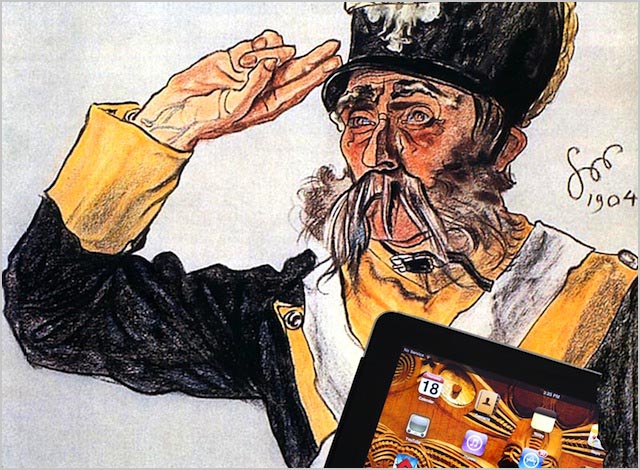 Delimiter’s Curmudgeon column is contributed by David Braue, who has forgotten about more heavily-hyped gadgets and supposed life-changing technologies than you’ve probably ever seen. His hobbies include long sunset walks along iPhone-lit beaches, setting the proverbial clocks on peoples’ proverbial VCRs, embedding hidden swear words in the Delimiter CMS, and ranting about anything in the tech world that has it coming. Oh, and Scrabble.

opinion Watching the tablet market has been like watching a teen slasher flick: you know they’re all going to end up dead but one, but you still enjoy yelling warnings at the screen and watching the evisceration. So it was following the rapid release and demise of the HP TouchPad, which this week made a beeline for the dustbin of history – and made some greedy punters a bit of pocket change as they ignored the one-per-person limit and snatched up TouchPads by the handful to sell on eBay for more than twice what they paid.

As we have seen over the past month, that’s just how things work in the tablet market. Fresh from a seeming victory that saw it successfully block Samsung’s Galaxy Tab 10.1 from sale here and in Europe, Apple’s fortunes turned – theoretically – as the European injunction was summarily lifted and its rivals pounced with patent battles of their own.

Will the cases make much difference? They’ll be great fodder for journalists, but change nothing: in Australia’s tablet market, things are far more black and white: there is the iPad, and there is everybody else. Nobody can make people buy its competitors, and signs are that almost nobody wants to – except at below-cost prices that no vendor wants to touch.

There has been extensive discussion about what HP could have done to make people want its tablet more, and the chaos at Harvey Norman this week showed that a cheap tablet will definitely move. Such a device, built for quality, could cut the legs out from under the iPad by providing a basic device that does most of what people use the iPad for.

That said, a cheap tablet will also devalue the entire market and change consumer expectations so dramatically that nobody will be able to make a quid out of it. Furthermore, no vendor comes into a market aiming to lowball the competition – at least, no vendor that’s capable of producing something as complex as a tablet. I’m sure there are a dozen Chinese clone makers ready to pump out devices that look and act (sort of) the same, but consumers will shun tablets that don’t work as they expect (read: like an iPad).

The thing is: so far, there’s no reason to buy any tablet but an iPad. Fans of diversity – and those who dogmatically oppose the top-down technocracy that is Apple – will hate me for saying it. I know because I used to be one of them: on a trip to Singapore years ago, I went shopping for a portable media player and decided to buy anything but an iPod. I was not, I swore, going to become yet another sheep, a lemming, a cog in the wheel of Apple’s world domination.

Months later, I was back in Australia and my chosen alternative – a no-name brand that looked good in the shops, cost the same as an iPod and boasted a big screen and broader format support but worked about one-fifth as reliably – simply stopped working. I inevitably questioned my determination to think different, and decided that my sanity would suffer less if I simply thought different, but did it Apple’s way.

I’m not alone. In fact, the mobile device market in Australia – even more so than in many other markets – has become, if I may quote Ruslan Kogan, Apple’s bitch. Hoping to tap into an as-yet-untapped vein of anti-Apple sentiment, retailers are dutifully stocking alternatives as one contender after another launches heavily-marketed iPad alternatives – but I don’t get the impression many people are buying them. I was among the hoardes of TouchPad opportunists this week, and I didn’t see anybody even glance at the Xoom, PlayBook and Aconia tablets in the display case. I hate to say it, but Australians – like buyers in other countries  – simply don’t care about them.

Vendors haven’t done themselves any favours. Research In Motion, for example, chose to differentiate its PlayBook by chaining it to BlackBerrys and preventing users from accessing email. Acer hit the mass market with a pretty but overpriced and largely unremarkable tablet  that does approximately half of what the iPad does, for similar money. Optus and Telstra weighed in with stripped-down devices only a mother could love.

Samsung proudly crowed that it had sold more than 2 million of its Galaxy Tab, but that was more than half a year ago and there have been no updates since – most likely because it has not reached the 3 million mark yet. Even Motorola’s Xoom, whose most redeeming quality is the fact that people don’t flat-out hate it, is perhaps most notable for its blandness and post-launch price cut. Vodafone Australia was so excited about the Xoom that it decided months ago not to carry the device, opting instead to wait for the Galaxy Tab 10.1 (a decision that now has it waiting for Godot). US carrier Sprint Nextel recently killed plans to sell the PlayBook 4G citing lack of customer interest in anything other than iPads, and the Wall Street Journal recently reported that iPad competitors (and not just the TouchPad) are piling up in warehouses, unsold.

Australians don’t want rival tablets. They want cheap tablets, or they want an iPad. There is simply no in-between, and despite their moral assertions that they have value in the market, companies other than Apple are blowing it, time and time again.

It’s in the fingers
The only way to beat the iPad is to release a better, more desirable product – or one that’s far cheaper. For reasons I’ve already mentioned, the latter is unlikely to happen for a while – so I’d suggest Apple’s competitors could start working on that first point by letting their fingers do the walking.

No, not those two fingers. I’m talking about my two index fingers – which, since the beginning of (Apple) time have been able to take a screenshot of whatever’s on my iPhone or iPad screen simply by simultaneously pressing the power, then home buttons.

This seemingly basic feature has been around forever in the Apple world and – if your household is anything like mine – is used with frightening regularity. It’s used to record high scores of games, screenshots necessary for my professional work, map directions to be emailed as an image to someone that needs to find something. I have used the screen-capture function as an impromptu quick-and-dirty method for cropping photos to suit the iPhone’s screen, a way to capture and share an important email, to clip interesting online stories for later reference, and more.

It’s telling that the first major competitor to the iPhone, Google’s Android, forewent the screen-capture capability altogether; Google figured screen capturing was something only developers would want to do. To this day, Android screen captures either require you to root your phone and install a third-party application, or tether your device to your computer and do a few tricks that will leave the average smartphone-using sop bawling with frustration.

One how-to guide I found offers “a quick tip” for those who haven’t rooted their phones and want to take screenshots. First, you download Google’s Android SDK, see? Then you set it up, plug in your phone, run the ddms tool, select your device, start up your phone, set up the image you want to grab, and hit ‘refresh’.

Dear Google: are you effing well kidding me?

Tell your average smartphone user to do this with their tablet, and they’re going to hit you over the head with it. Average, ordinary consumers may understand why they would want to capture images of their screen, but if you tell them they have to go home, plug in their phone, enter debugging mode, then tell their device to say “cheese” while they mirror its screen in a screen emulator, well, it’s not going to happen. It’s stupid, autocratic, and fundamentally unnecessary. Nobody plugs their smartphone into their laptop in the hopes of getting a high score on Angry Birds that they might want to show their mates.

That it took four years before an Apple competitor finally thought to include similar functionality – Research In Motion built it into its PlayBook, and HP copied Apple’s two-fingered gesture in its new TouchPad but had other problems – shows how utterly out of touch the industry has been. Even in its Honeycomb release, Android still requires developer mode, or a rooted phone or tablet, to take screenshots.

Google is so determined to make Android work on its terms – and “its terms” here means “in a way that makes sense to its geekerati workforce” – that it’s forgetting the things that made the iPad so popular. Instead, Google is making its tablets into bigger versions of its phones, which have been a runaway success.

This is a fatal mistake: phones have value for everyday consumers even if they don’t load apps onto them, because they are still very good phones. But tablets live and die by their apps and their user experience – and so far no vendor has come close to Apple on either count.

Apple may lock down that user experience, but most people simply don’t mind because there’s usually a way to do the things you want to do. Making this easy and intuitive is something Apple figured out a long time ago, and its competitors are showing nothing so well as their complete inability to learn a basic truth of fighting Apple: you can’t stop a crazed, psychotic killer with a banana – unless you hammer it down his throat.

Prove me wrong. Tell me what you’ve seen in the current batch of iPad competitors that makes them worth purchasing instead.