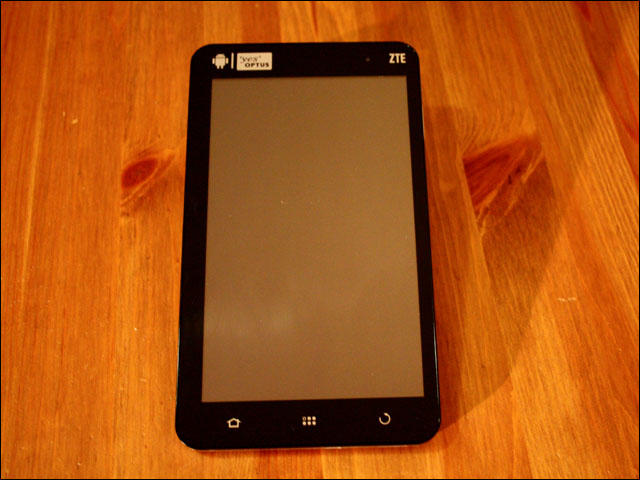 review The “me too” effect often runs rampant in Australia’s telecommunications industry. If Telstra has something, the mantra goes, Optus must have one too. So we can’t say we were that surprised when Optus revealed in November last year that it would launch a self-branded 7″ Android tablet — just a month after Telstra did the same.

But with Telstra’s T-Touch Tab attracting poor reviews, and a slew of new Android tablets expected in Australia in 2011, the question now becomes one of whether Optus’ budget option is up to spec. Is the Optus My Tab destined for glory, or for the trash heap of botched attempts at tablet nirvana? 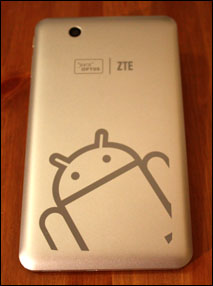 Design
Has Chinese manufacturer ZTE been taking cues from Apple supremo Steve Jobs? That’s the question that sprung to mind when we first picked up the Optus My Tab. If you stripped away the Optus, Android and ZTE branding, reduced the number of front-facing buttons from three to one, and made the My Tab a little larger, it would look very similar to a combination of Apple’s flagship iPad tablet and the company’s latest iPhone 4 handset.

The My Tab’s touchscreen is plastic, but it looks and feels a little more like glass. Its black borders are not embedded in metal surrounds the way Telstra’s T-Touch Tab’s are, but sit on top of the device’s silvery back the same way that the iPhone 4’s black front sits on its own aluminium backing.

On the side of the device are a minimal number of unobtrusive buttons — just a power button and volume controls on the top right. On its front bottom, when you hold the device vertically, are the standard three Android controls — the home, return and settings buttons. Optus, Android and ZTE logos sit at the top of the screen, and the same can be found on the device’s back.

Tiny speaker grills adorn the top and bottom of the My Tab, and standard USB and 3.5mm headphone jacks are included, with a charging plug on the bottom.

We didn’t have a sophisticated enough set of scales on hand to weigh the My Tab precisely. However, we believe it to be similar or a little lighter than ZTE’s Light tablet, which comes in at 403 grams. This makes the My Tab much lighter than Apple’s 3G iPad (at 730g), and it’s substantially lighter than Telstra’s T-Touch Tab, which clocks in at 500g. The My Tab is probably comparable to Samsung’s Galaxy Tab, which weighs about 380g. It’s not as light as most eBook readers, but it’s also lighter than almost any other comparable device.

Overall, the effect is one of minimalist elegance. The build quality of the My Tab is not that of an Apple product, or even Samsung’s Galaxy Tab, but it’s not bad — and in fact we’d say the My Tab is about 80 percent of the way to looking as svelte as the Galaxy Tab — which costs about $700 more.

Features
The design of the My Tab is great, but when you get to its featureset, you begin to realise why it costs just $269 (when you buy it online) — compared with more powerful tablets such as the Galaxy Tab or iPad.

For starters, the My Tab only runs version 2.1 of Android — which means it will speedily drop behind the pack, with most high-end devices already supporting 2.2 and the first phones beginning to be released with 2.3 — and tablets beginning to arrive with version 3.0, which is designed specifically for the tablet form factor.

Its hardware is similarly dated. It comes with a 2GB SD card installed, and had an extra 125MB of space available on its internal drive. In a year where many tablets and smartphones will come with CPUs with two cores running at 1GHz each, the My Tab’s 600Mhz CPU looks a little underwhelming, and its 800×480 resolution screen we would expect to eventually become eclipsed. The model we had came with only 415MB of RAM — which feels a little constrained.

The My Tab’s back camera is similarly poor quality — we’re not sure precisely what megapixel rating it holds, but you won’t want to be taking many pictures with it. And of course the My Tab has a resistive touchscreen — which is inherently less sensitive than the modern capacitive screens found on devices such as the iPad, iPhone and most other modern smartphones and tablets.

Optus has installed some of its own custom software on the My Tab — but nothing too odious; the device is pretty close to vanilla Android, which is how we like it. From a network perspective the device is fairly standard — supporting Optus’ 3G networks at a decent clip, as well as featuring Wi-Fi, Bluetooth, GPS and so on.

Performance
Performance-wise, the My Tab has both good and bad points of which you’ll need to be aware. Firstly, let’s look at the bad.

With just 2GB of included storage space, the My Tab isn’t going to be a nice place to keep your entire MP3 collection on file for those long road trips, and if you want to change the SD card for one with more capacity, it looks like you’ll have to pry the front cover off the My Tab to do so. Primitive.

Secondly, the device’s camera is woeful. We took a few shots in a few differently lighted environments, and the results were just … yuck. Forget about using this device for taking anything other than the most cursory photos. You won’t like the result.

In addition, the My Tab’s processing power leaves a lot to be desired. It’s simply not snappy to navigate the device’s Android operating system; you’ll be waiting a few seconds for even light applications to load, and of course you’ll experience a little bit of annoyance with the My Tab’s resistive screen.

However, the My Tab does have a number of positive aspects when it comes to performance.

When we reviewed Telstra’s T-Touch Tab, we noted that one of the device’s major problems was its poor-quality resistive touchscreen, which is incredibly hard to use when compared with a modern capacitive touchscreen as found on handsets such as the iPhone. However, the My Tab’s touchscreen, although also resistive, is a class above that of the rival Telstra device.

It’s still not as sensitive as a capacitive touchscreen, but it’s actually pretty decent to use, and certainly kids and older folk won’t have any problems at all with it. You can even type at a reasonable speed on the My Tab with no issues.

The battery life is acceptable — we played around with it over a weekend with no problems — and the included Wi-Fi and 3G make internet access more than fine. We watched ‘high-quality’ movies streaming through YouTube on the My Tab’s Wi-Fi connection fine, so we know that its movie-watching quality is acceptable — if probably not up to 1080p standards.

Finally, the My Tab’s light weight means it’s easy to carry it around in a handbag or carry bag all day without any problems. It’s robust — you can send it with kids to school — and it will make a decent eBook reader, as it’s light enough to be held in one hand for a while, especially if that arm is resting on the side of a chair or your knee in bed.

Conclusion
We didn’t fall in love with the Optus My Tab, as it doesn’t have high enough specifications to compete with the incoming generation of tablets such as the Galaxy Tab, Motorola Xoom and so on. However, we really, really liked this little ZTE gem.

The Optus My Tab is light, responsive, decently featured, and perfect for the tasks it was designed for — light browsing, email, reading and multimedia use — without being overpowered or overpriced. We can see this device being given to kids as a Christmas present and taken to school every day, or to older folks who want to do some light browsing and emailing on the lounge without paying too much for it.

This isn’t a device for the early adopter technology set, which is rightly waiting for the Xoom, the iPad 2 and other devices. But for millions of other Australians looking for their first tablet experience, the My Tab is an inexpensive way to get your feet wet in this new generation of devices.