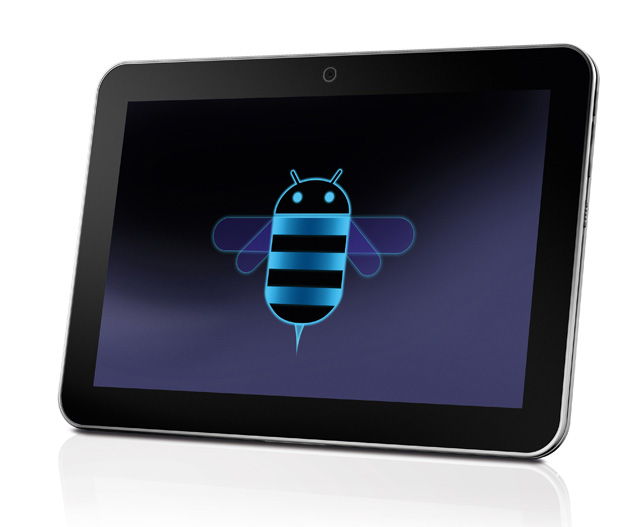 news Japanese consumer electronics giant Toshiba yesterday launched what it described as “the world’s thinnest and lightest tablet” in Australia, putting the 10.1″ Android device on sale for a recommended retail price of $579.

The AT200 comes with an industry standard 10.1″ touchscreen, cameras on the back and front, and a range of ports including micro HDMI, micro USB 2.0 and microSD. It features a 16GB solid state drive, and its touchscreen is made from CorningR’s Gorilla glass material. It runs version 3.2 (Honeycomb) of Google’s Android platform and will be available in stores from early February. These details weren’t in Toshiba’s media release, but Gizmodo states that the tablet comes with a 1280×800 resolution screen, a dual-core 1.2GHz TI OMAP4 CPU, and 1GB of RAM.

In addition to the AT200, Toshiba also today launched a second tablet in Australia, the AT1S0, which features a smaller 7″ screen but many of the same specifications as the AT200. It comes with a 1280×800 touchscreen, Android 3.2, an NVIDIA Tegra 2 dual-core CPU, HD cameras on the back and front of the tablet and so on. It weighs in at 375 grams and also comes with micro HDMI, mini USB and microSD connections. This tablet can come with 8GB or 16GB of storage space and will retail for $399.

Toshiba last launched an Android tablet in June, the AT100. the device features similar specifications to the AT200, but is a bit thicker. It also went on sale for a recommended retail price of $579, but like many Android tablets over the past few months, it appears it has been discounted — selling at JB Hi-Fi currently for $467. It is believed that many of the Android tablets sold in Australia by manufacturers like Motorola, Samsung, Toshiba and Acer have sold poorly over the past six months and are consequently being discounted to make way for new stock.

So far, the local tablet market remains dominated by Apple’s iPad, which first launched in Australia in mid-2009 and was refreshed with the company’s iPad 2 model this year.

Toshiba also today announced several new laptops to be sold in Australia, the U840 Ultrabook (RRP of $1,499) and the gaming-oriented Qosmio X770 and multi-media-oriented Qosmio F750 (RRSP $1,999).

“We all want to look good on the move, but without compromising on the power or technology at our fingertips,” said Justin White, Product Marketing Manager, Toshiba in a statement. “Our thin, light and sleek tablets and ultrabooks pack a serious performance punch whether you’re settled in at home, hard at work in the office or out and about.”

opinion/analysis
I expect Toshiba’s new tablets to do about as well as its old tablets — that is, not well at all. The company’s stock currently defines ‘standard’ in the Android tablet space, and not that many people are buying Android tablets at all in Australia right now, let alone the most bog standard ones. Toshiba needs to differentiate itself from the pack at least a little if it is to succeed in its tablet play.