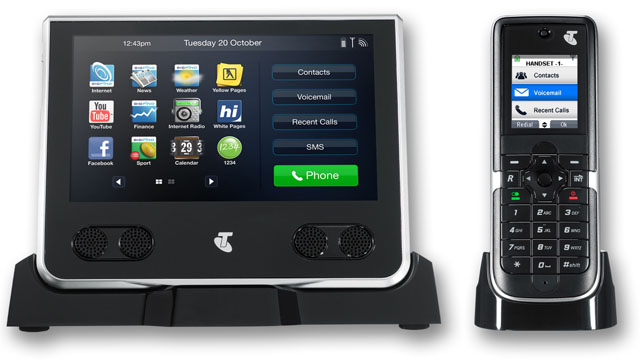 As it promised several weeks ago, Telstra has upped the included data quotas on some of its home bundled packages as part of its launch of its T-Box flagship integrated media centre, which goes on sale this week.

According to a post on its Exchange blog today, the telco has created three new bundle packages with all include unlimited local calls and the option to include either a T-Box or the telco’s T-hub next-generation home phone device (pictured above).

The lowest offering, the Home 25GB Value bundle, goes for $109 per month on a 24-month plan plus a $35 up-front charge. It includes a version of Telstra’s Elite Liberty ADSL2+ broadband plan with double the allowance of the previous equivalent bundle — 25GB — a T-Box or T-Hub and unlimited local calls and $1 STD calls.

100GB and 200GB bundles are also available, both including unlimited local and STD calls as well as a T-Box or T-Hub. The 100GB plan also includes unlimited calls to any Telstra mobile from your home phone, while the 200GB plan includes unlimited calls to any Australian mobile from your home phone, as well as $10 monthly credit towards international direct dial plans.

“We’ve been expanding our range of bundles since late last year and these new bundles are designed to help make the digital home a reality by combining home phone, broadband and entertainment services together in a good value package all from Telstra,” said the general manager of Telstra’s bundling team, Narelle Charity, in the blog post.

There was a mixed reaction to the new bundles in comments from readers on the Telstra blog.

“Your fixed line ADSL services are still incredibly overpriced,” wrote a reader named James, claiming other providers offered a higher level of downloads for cheaper prices. ” I’d go with Telstra for both internet and mobile internet, but the prices are simply excessive,” he said.

But another commenter disagreed — noting they were currently paying $129 per month for 150GB of data with iiNet. “The new Telstra 200GB plan is the first time I have thought that I might switch back to Telstra,” they wrote.