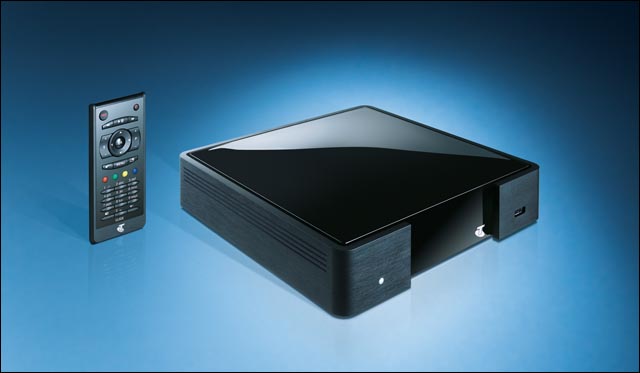 Telstra today revealed it would launch its Linux-based T-Box integrated media centre set-top box from mid-June at a stand-alone price point of $299, with a sledload of free and pay-per-view content available and an associated revamp of its broadband plans in the works.

The device – built by IPTV specialist Netgem — includes two digital TV tuners and a 320GB hard disk for video recording functionality, as well as a flexible internet video platform that is designed to function as a conduit for a variety of content from Telstra’s burgeoning Media division, as well as third-party services such as YouTube.

These channels will be available free to those who buy the T-Box, although the device will be locked to Telstra’s BigPond broadband network and not usable by those subscribing to other broadband providers.

In addition, the T-Box will allow customers to tune in and record standard and high-definition free to air broadcasts and record them to the T-Box’s hard disk – although digital rights management technology will stop owners from transferring the content to other devices. An electronic program guide will allow customers to plan ahead in their viewing.

The T-Box will allow Telstra to tap into the ongoing Australian demand for video on demand services through the integration of the telco’s BigPond Movies service, which will allow customers to rent about 1,400 movies and TV shows online from launch, with a further 600 slated to be added by the end of this year.

Most of the major studios – such as Disney, Warner Bros., Sony, Paramount, Village Roadshow, Icon, Umbrella and Hopscotch – are on board. The service will allow users to start watching a film shortly after it starts downloading, and users will be able to watch the content as many times as they want within a 48-hour window after they watch it for the first time – and they have seven days to start the clock ticking.

Several other content libraries available to users are BigPond Videos – a free on-demand service similar to YouTube, as well as the popular Google-owned video sharing service itself.

The nuts and bolts
Telstra executive director of its Fixed and Broadband Products, Craig Turner, said the company had been piloting the T-Box in Melbourne for the past six months with several hundred customers.

The upshot of the testing was that Telstra learnt that about 90 percent of its customers would have sufficient speeds (typically HFC cable or ADSL2+) to run the IPTV services through the T-Box, although lower-quality streaming services of 1Mbps would also be available if some customers were experiencing issues with the normal 3Mbps streams.

However, he emphasized that Telstra had done a lot of work in its content distribution network – setting up video caching services around Australia – to ensure a good experience.

Customers who bought the T-Box but later realized their broadband connection was not strong enough to cater for its services could get a refund, he said.

Most of the video content to be delivered through the T-Box will come from Telstra’s own servers and will therefore not count towards customers’ broadband quotas. But some will – for example, YouTube downloads.

Consequently, along with the launch Telstra is planning to “dramatically” increase the quotas on its broadband bundles, the telco’s executive director of segment marketing, Jenny Young, said, with the top bundle to hit 200GB and to include unlimited local, fixed to mobile and STD calls.

A more typical plan will include a more modest amount of quota – around 25GB — for around $109, including a broadband connection, home phone, network gateway and T-Box, with Telstra placing a high degree of emphasis on making sure that customers’ own internal household networks are also robust enough to support streaming video.

The T-Box itself will retail for $299, with no ongoing monthly cost, or customers can choose to pay it off over two years.

The T-Box will use the High-bandwidth Digital Content Protection (HDCP) standard to avoid piracy of the content it delivers. The user interface of the platform is similar to that used in other media centre devices such as the Xbox 360 — with the ‘cover flow’ style also used by Apple in its iPod/iTunes eco-system.

Telstra confirmed the basic operating system underpinning the device was Linux, but was unable to provide any further details.

The future
Telstra appears to be investing heavily in a number of areas to support the T-Box experience going forward. For example, high-definition video on demand is to arrive within the next six months (the current movies are ‘DVD quality’) and the telco is also planning to rollout software updates to the T-Box remotely that will add features.

For example, it is planning to utilize the T-Box’s USB connection to allow customers to play their own movies from a USB storage device through the T-Box.

And the company has hired stars such as former AFL footballer Dermott Brereton to aid in creating flagship IPTV content with a strong Australian flavour.

Ultimately Telstra sees the T-Box offering as appealing to the large segment of the market which has not adopted pay-TV offerings on a monthly subscription basis, similar to which the telco’s joint venture Foxtel delivers.

“There are technically advanced customers that can do one way or another, this is about taking it mainstream,” said Turner.