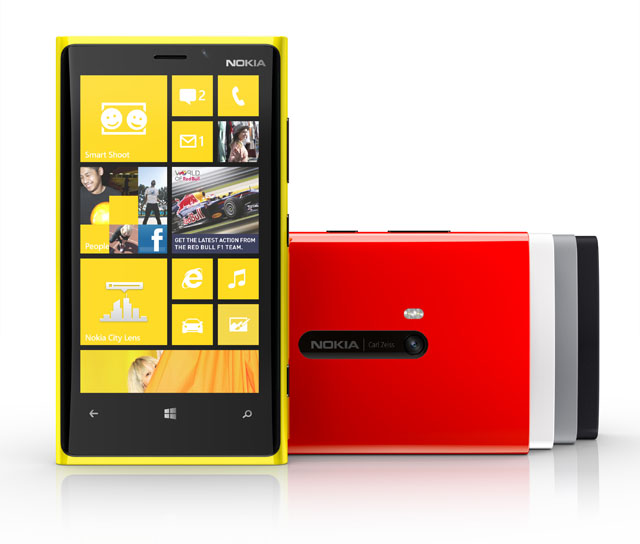 preview The Nokia Lumia 920 is the Finnish manufacturer’s first stab at a smartphone running Microsoft’s new Windows Phone 8 operating system, and it supports Australia’s growing clutch of 4G mobile networks to boot. But can this big, bold and beautiful challenger take on the current reigning champions of the smartphone world? Read on to find out.

Design
If you thought Nokia’s previous Lumia line could best be described as ‘fluoro’, you would have been right. In a smartphone market dominated by muted grey and matte black tones, the Lumia brand has come to mean vibrancy and colour. With the 920 and its sister phone, the 820, Nokia has turned this factor up to maximum, with the Lumia 920 being available in a variety of eye-watering colours ranging from yellow to red, white, grey and matte black. We can’t say we’re the biggest fans of the bright yellow and red models – they’re a little too vibrant for our tastes – but we’re sure some people will welcome them.

In addition, it’s not just the polycarbonate shell of the Lumia 920 that has been affected by Nokia’s colour focus. By default, the icons on Windows Phone 8’s home screen will use the same colour scheme as the phone’s physical exterior. This is a striking design choice, and we’re sure the 920 will get a lot of attention when you pull it out in a crowded space.

Apart from the radical colour overhaul, the Lumia 920 appears to feature many of the same design features as Nokia’s previous Lumia 900 models. It’s got the same volume rocker, on/off switch and camera button on the right-hand side, the same large touchscreen with Windows Phone buttons beneath it on its front, and the same lovely colourful polycarbonate shell covering its back.
It looks like the unit’s microUSB connection for synching and charging is on its bottom, and its 3.5mm headphone jack is on top. The camera is conspicuously located on the back as well.

To our mind, it’s great that Nokia has kept this design consistency between its top Windows Phone 7 and Windows Phone 8 models. Frankly, the Lumia 900 and other models in that generation of Lumia smartphones were some of the most lovely smartphones of any type which we’ve seen – both to look at and in the hand – and really do advance smartphone design and build quality into the stratosphere. Don’t get us wrong – we really like what Apple, HTC and Samsung are doing as well at the moment, but Nokia’s Lumia line is just simply stunning, and it looks like the 920 will continue this trend (but we won’t personally be picking up the bright yellow model).

Features
Wow. If there is a feature which the Lumia 920 lacks, we can’t find it. This model is absolutely packed to the gills with virtually everything you’d want from a smartphone. This is truly the definition of “high end”.

The Lumia 920’s touchscreen is a 4.5” model running at Windows Phone 8’s new top resolution – 1280×768. This is a touch smaller than the 4.7” and 4.8” models which Samsung and HTC are currently headlining their roster with, but we like the 4.5” size. It’s bigger than Apple’s top-end 4” model, the iPhone 5, but it doesn’t look like it’s big enough to be too large for those with small to medium-sized hands, as the 4.7” and 4.8” models can be occasionally. The resolution upsize is a huge welcome to those who have previously been feeling cramped by Windows Phone 7’s poor 800×480 resolution. This works out at 332 pixels per inch, which is very decent.

The 920’s beating heart is a Qualcomm Snapdragon S4 model running at 1.5GHz, which is more than enough to fuel the smartphone’s functions, and it comes with 32GB of storage space, but has no microSD card capability. 1GB of RAM comes on-board.

One of the biggest features which we’re looking forward to it’s the 920’s support for 4G speeds. Both Optus and Telstra use the 1800MHz frequency for their 4G networks, and the 920 supports that frequency, although it’s launching initially only through Telstra. This means theoretical download speeds of up to 100Mbps and upload of 50Mbps, but in practice you probably won’t be able to download faster than between 30Mbps and 40Mbps when you’re in a Telstra 4G zone. Optus’ 4G network is typically a little slower but can peak at up to 60Mbps. And of course when you’re outside these areas, the Lumia 920 supports the other HSPA family of mobile standards which is the next best possible.

NFC for mobile payments (in theory) is here, as is Bluetooth, and the battery is a 2000mAh model which Nokia says is good for 400 hours of standby, or maximum video playback time of 6 hours, music playback of 67 hours or 3G talk time of 10 hours. One other notable feature is the Lumia 920’s ability to charge its processor through so-called ‘inductive’ charging – which requires the unit to be placed on a charging pad, rather than attached to a charging cord. A number of US cafe chains and airlines have announced plans to deploy charging stations in their facilities.

In addition, as with previous Lumia handsets, Nokia is planning to include its own specialised applications with the Lumia 920 – for example, its excellent mapping application, as well as its Music Store, and so on. These applications do add some value and help differentiate the company’s handsets from other Windows Phone rivals.

The other major new feature which the Lumia 920 introduces – and one of its key selling points – will be Windows Phone 8, which has not yet been released by Microsoft. Microsoft’s new mobile operating system features a slew of new and long-awaited features, ranging from multi-core CPU support, to a resolution bump (1280×768 or 1280×720), the ability to support microSD cards, NFC chip support, Internet Explorer 10, a Wallet feature for storing debit/credit cards, coupons and boarding passes and better maps and directions (through integration of Nokia’s maps feature). Most of these features were already available through Apple’s iOS and Google’s Android platforms, and Windows Phone users have been waiting them for a long time for the Microsoft platform. We’re very glad to see them arrive.

Performance
At this point it’s very hard to know how the Lumia 920 will perform, and there’s also the tricky need to separate the performance of Windows Phone 8 from the whole package. If Windows Phone 8 is a dog, then the 920 will doubtless also be a dog, although we doubt that this will be the case. No doubt there will be a few bugs for Microsoft to polish after the new operating system launches, but we’re sure in general WP8 will be a vast improvement over WP7.

However, our tests of the Lumia 900, the direct predecessor to the 920, were very strong, with the smartphone delivering strong battery life, camera functionality and overall build quality. If the 920 performs similarly to the 900, but with the addition of 4G speeds and the massively improved functionality and resolution which WP8 will bring, then the 920 should be a contender to the throne of Australia’s best smartphone, alongside the Apple iPhone 5, the 4G Samsung Galaxy S III and HTC’s One XL. Given the fact that Windows Phone has less third-party developer support than iOS or Android, we wouldn’t expect the Lumia 920 to win that battle – but it would definitely be a contender.

One factor we will be examining carefully will be how the Lumia 920’s battery performs when subjected to 4G speeds – a notorious battery drainer.

Conclusion
We’re really quite excited about the Lumia 920. From 4G support to a much-needed resolution boost and all the benefits that come with Windows Phone 8, this model is like a massively improved Lumia 900 – and as our review makes clear, we really liked the 900 to start with. The Lumia 920 will launch initially through Telstra and a number of third-party retailers – with pricing and availability to be announced at the end of October 2012.