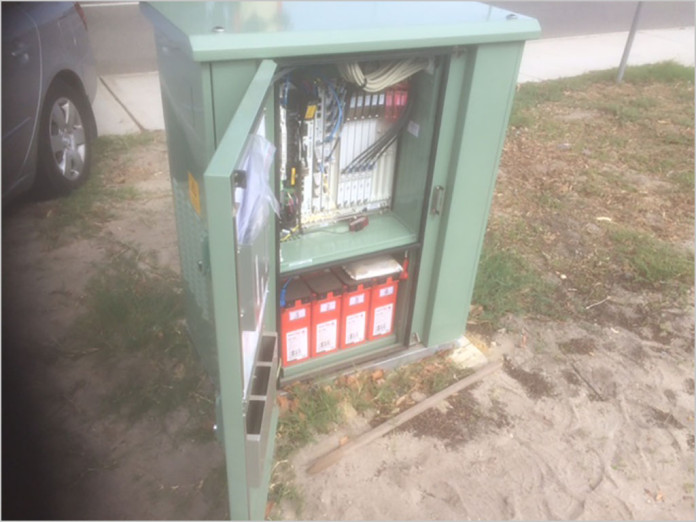 news The official launch of the Coalition’s preferred Fibre to the Node technology in Western Australia last week appears to have suffered a minor setback, with one of the NBN company’s neighbourhood ‘nodes’ appearing to have been left with its door open, endangering the provision of broadband in its area.

Labor’s original vision for the National Broadband Network called for the network to feature a near-universal Fibre to the Premises rollout. However, since taking office in September 2013, the Coalition has heavily modified the approach, instead focusing on integrating the legacy copper and HFC cable networks owned by Telstra and Optus.

“It is a pleasure to be here today to celebrate this significant milestone for the nbn rollout in Western Australia,” Minister Fifield said last week.

“The use of FTTN to deliver superfast broadband is an integral part of the Government’s multi-technology mix approach to the nbn, which uses the most appropriate technology to deliver the nbn sooner and at less cost.”

Fifield said the NBN company’s FTTN network uses the existing copper infrastructure already running into homes, enabling nbn to dramatically speed up the network rollout, save on construction costs and reduce the time residents must wait for upgrades.

“From Friday, the nbn’s superfast broadband will be available to around 7,000 homes and businesses in parts of Cannington, Wilson, Langford and Beckenham. Residents can now contact their preferred service provider to discuss options or place an order for a service,” Irons said.

“Around 19,000 more services will also be available shortly in Queens Park, East Cannington and additional areas of Beckenham.”

However, the launch of the FTTN network may not have gone precisely as the trio had planned.

Late last week Delimiter was sent photos of a FTTN ‘node’ on the corner of Spencer Road and Southdown Place, in Thornlie in Western Australia. The node appears to be connected to the Cannington telephone exchange.

The photos appear to show that the node was left open by either the NBN company or one of its contractors, with its door swinging and the inside circuitry, battery backup and other features left completely open to the elements.

The individual who sent in the photos to Delimiter stated that the node had been left that way for at least an hour, as they had been monitoring it.

Leaving a node’s door open to the air has the potential to create a number of significant issues for both the NBN company, as well as NBN customers in the area.

It appears that it would be trivial for the electronic equipment inside the node to be stolen or vandalized, or for it to be modified without the NBN company’s knowledge. This could lead to hundreds of premises in the immediate vicinity being unable to access their normal high-speed broadband services.

It is also possible that this kind of situation could create a risk for local residents, due to the powered nature of the node, as well as the batteries (the red units) featured at the bottom of the node.

It is not known how common this situation is with respect to the NBN company’s FTTN rollout.

Today I joined @SteveIronsMP and @KenWyattMP in Cannington to mark the 1st FTTN #nbn switch on in Western Australia pic.twitter.com/5ECSZ3iUtr