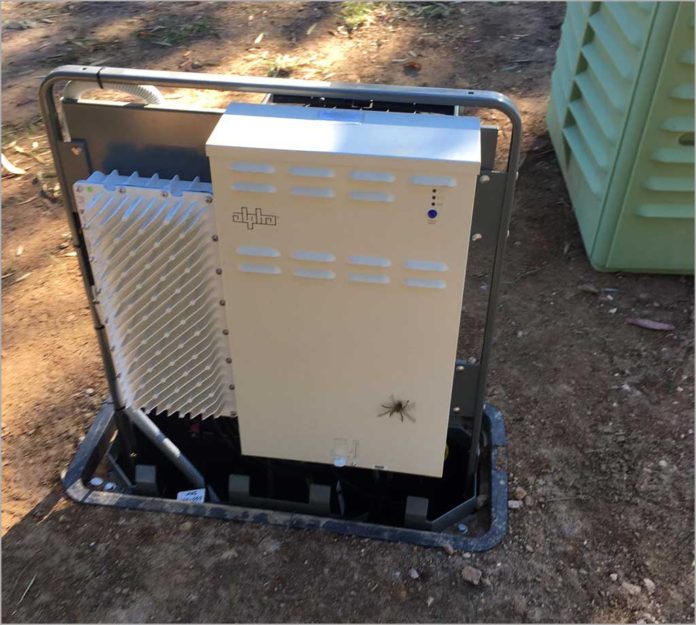 news The rollout of the Coalition’s preferred Fibre to the Node technology has suffered another setback, with the revelation that the NBN company is leaving ‘micronode’ infrastructure completely open to public access, in a substantial security breach.

Labor’s original vision for the National Broadband Network called for the network to feature a near-universal Fibre to the Premises rollout. However, since taking office in September 2013, the Coalition has heavily modified the approach, instead focusing on integrating the legacy copper and HFC cable networks owned by Telstra and Optus.

FTTN sees fibre run from telephone exchanges to local neighbourhood ‘nodes’, before re-using Telstra’s copper network for the remaining distance to customers’ premises. In some cases, the NBN company has chosen to deploy so-called ‘micronodes’, which are smaller versions of the nodes which service smaller groups of premises.

However, Delimiter can today reveal that these micronodes are, at least in some cases, being deployed in a completely insecure manner.

A reader has sent Delimiter photos of a micronode located in the Mount Barker area in South Australia, where the NBN company has recently begun launching FTTN services.

The micronode is located in a public area on the side of a road. However, the green cover is extremely easy to remove. It appears that the cover has two small pins on each of its short sides. Once these pins are removed (which can be done with no specialist equipment), the green cover can be slid off the unit.

“Anyone could walk up to this enclosure and open it,” the reader said.

It appears that it would be trivial for the electronic equipment inside the micronode to be stolen or vandalized, or for it to be modified without the NBN company’s knowledge. This could lead to hundreds of premises in the immediate vicinity being unable to access their normal high-speed broadband services.

It is also possible that this kind of situation could create a risk for local residents, due to the powered nature of the micronode. A third issue is that local wildlife could gain access; as can be seen above, a spider has achieved entry to the micronode (it is believed this happened when the cover was on).

The lack of security on the NBN company’s micronodes in South Australia mimics a situation seen in Western Australia several weeks ago.

At the time, Delimiter was sent photos of a FTTN ‘node’ on the corner of Spencer Road and Southdown Place, in Thornlie in Western Australia. The node appears to be connected to the Cannington telephone exchange.

The photos appeared to show that the node was left open by either the NBN company or one of its contractors, with its door swinging and the inside circuitry, battery backup and other features left completely open to the elements. The individual who sent in the photos to Delimiter stated that the node had been left that way for at least an hour, as they had been monitoring it.

Delimiter has attempted to contact the NBN company to ask for a response to the security issue on its micronodes.

opinion/analysis
Anyone know what kind of spider that is? Looks fairly beefy. I wouldn’t want to be getting too close to it.