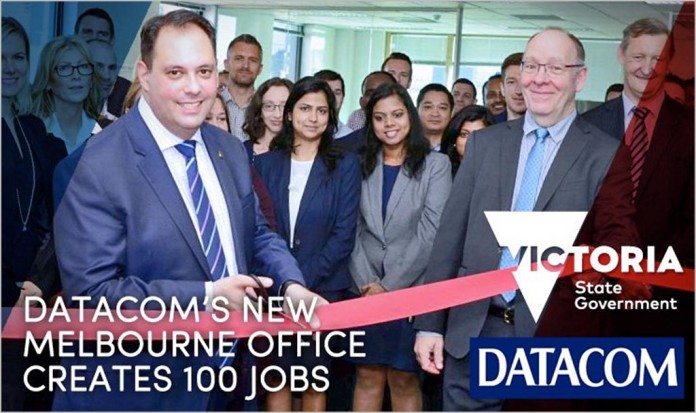 news IT services and solutions company Datacom has announced it will open a new office in South Melbourne with the creation of 100 new jobs over the next 12 months.

“The opening of Datacom Systems’ new South Melbourne office comes hot on the heels of a host of major investments by Australian and global tech companies that are boosting Victoria’s reputation as the number one tech destination in the Asia Pacific region,” Dalidakis said.

“The Andrews Labor Government is excited to work with companies like Datacom as Victoria’s booming tech sector spurs our transition to new industries and new jobs,” he added.

Datacom Group – a specialist in IT management and consulting, cloud, software, datacentre and business services – currently employs more than 4,500 staff across four countries and 27 offices, including approximately 1,500 staff in eight Australian locations.

A statement from the office of Dalidakis said the company’s decision to further invest in Victoria was “another vote of confidence” in the state’s growing tech expertise and digital capabilities.

The burgeoning tech sector in Victoria now generates more than $34 billion in annual revenue and employs more than 91,300 people.

Datacom Group CEO Jonathan Ladd commented: “We’re delighted to expand our footprint in Victoria, which is a thriving part of Datacom. We … are proud to be working with the Victorian Government and local business to help create jobs by transforming local business through the power of IT.”

Datacom’s decision to open an office in Melbourne represents more good news for Victoria’s tech industry following moves to the state by an increasing number of big-name startups, including GoPro, Zendesk, Eventbrite, Square and Stripe.