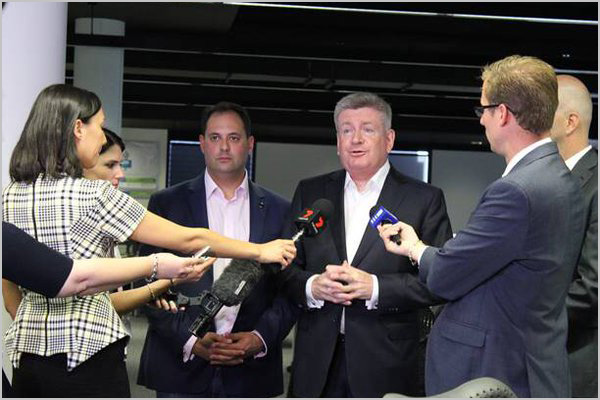 news The Victorian Government has announced that a new cyber security centre to be built as part of the National Broadband Network (NBN) infrastructure will help create 700 new high-skilled jobs in Melbourne over the next four years.

Victorian Minister for Small Business, Innovation and Trade Philip Dalidakis and Federal Minister for Communications Senator Mitch Fifield made the announcement on 6 December at NBN’s National Operations Centre in the city’s Docklands.

The pair said 400 tech jobs will be created over two years, with 300 more to be generated later by the project in construction, maintenance and technical support roles.

As the NBN rolls out across the country, new facilities are being established and skilled staff will be required to run them. These new jobs will be created in cyber security, technical support and administration, specialised ICT engineering and customer support.

Importantly, the NBN’s Cyber Security Operations Centre is now to be established in Melbourne. This will be the “first line of defence against cyber threat to the NBN”, the Victorian Government said, and will provide “a collection of services for the delivery of detection, identification, triage and management of cyber events and incident response”.

Dalidakis said locating the centre in Melbourne was a “significant win” for Victoria and a boost to the state’s reputation as Australia’s innovation and technology hub.

“This decision by NBN is a big vote of confidence for Victoria’s high-skill workforce and reinforces our reputation as Australia’s tech hub,” he said.

The cyber security unit will contribute to Victoria’s growing capability in information security, which is critical to safeguarding Australia’s innovative, knowledge based economy.

“NBN’s cyber unit is the first line of defence against cyber threats to the network and their investment in Victoria to house the central unit is a huge vote of confidence for our expert information communication capabilities to help safeguard Australia’s digital future,” Dalidakis said.

The Victorian Government, he continued, had “worked hard” to secure the NBN’s decision to locate the centre in Melbourne, providing assistance through the $508-million Premier’s Jobs and Investment Fund.

The investment also follows moves to Victoria by a growing list of leading tech companies including Zendesk, GoPro, Eventbrite, Square and Slack.

Back in August, the Communications Minister at the time, Malcolm Turnbull, said the workforce for the NBN would need to double in size to complete the project by 2020.

He announced a scheme aimed to recruit and train 4,500 workers, targeting school-leavers and individuals with previous work experience in the telecoms industry.