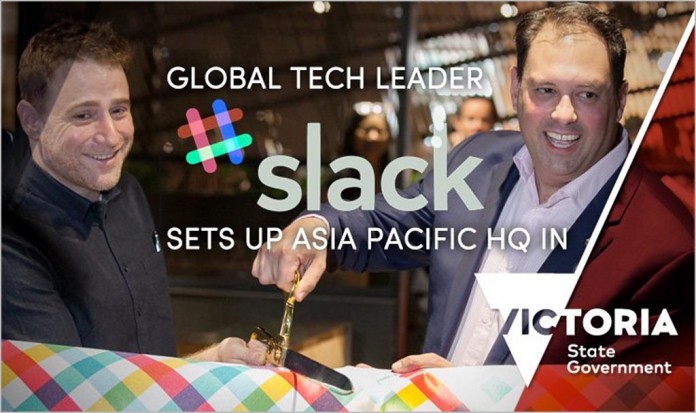 news Slack Technologies has opened a new regional headquarters in Melbourne that is expected to create 70 new jobs for Victoria’s growing tech sector.

Welcoming the company at the opening of the new HQ, the state’s Minister for Small Business, Innovation and Trade Philip Dalidakis said: “Choosing Melbourne as their Asia Pacific HQ, Slack joins a growing list of tech leaders that are investing in Victoria and strengthening our reputation as the country’s number one destination to do business.”

Slack is the provider of a popular group messaging tool that has become one of the fastest-growing business apps ever. As a result, the Silicon Valley-based startup now boasts a US$2.8bn (A$3.65bn) market valuation.

In just two years, the firm has developed a customer base of over 2.3 million daily active users, 675,000 paid accounts and over 369 employees.

“Opening an office in Australia marks an important milestone in Slack’s growth and will allow us to better serve our customers all around the world,” said Slack’s CEO Stewart Butterfield. “The city of Melbourne has been incredibly welcoming and offers a wealth of talent – we look forward to growing our Slack family here.”

According to a Victorian Government statement, securing Slack’s expansion in Melbourne was a “coup” that was announced last November.

It explained that, via the Victorian Government Business Office (VGBO) in San Francisco and Invest Victoria, the government had been able to assist the process by providing Slack with “key information” on the local tech ecosystem, visas, workplace arrangements and more.

The opening of Slack’s new office in the Melbourne suburb of Carlton follows similar moves by other notable tech startups such as Zendesk, Eventbrite, GoPro and Square, which have all also set up HQs in Victoria.

In the statement, the government cited a fDi Markets’ report which ranks Melbourne second in the Asia-Pacific region for the number of greenfield software firm headquarters set up in the last six years, with only Singapore having a greater showing. Hong Kong and Sydney occupy third and fourth place behind Melbourne, respectively.