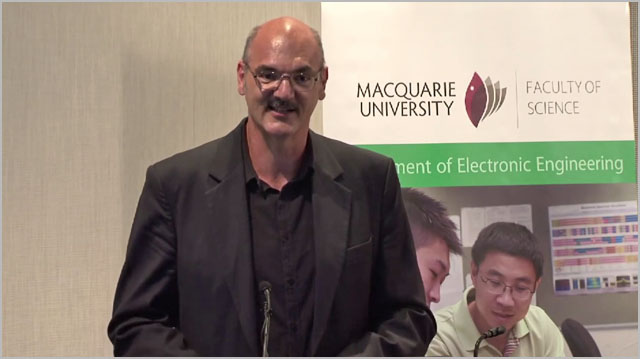 news NBN Co misled the Australian public about its treatment of Peter Ferris, it has emerged, with the company having made the highly experienced and respected network engineer who was responsible for the design of the company’s previous Fibre to the Premises network redundant rather than merely having demoted him, as it stated in April.

Ferris (pictured), whose formal title was executive general manager of planning and design at NBN Co, was one of the company’s early employees, joining it in October 2009 six months after it was established by NBN Co founding chief executive Mike Quigley. He has previously held several high-level technical engineering roles focused around Australian telecommunications networks, at companies including Telstra, Optus and 3 Mobile.

Although Quigley was the primary public face of NBN Co during Labor’s time administering the company, Ferris also appeared in public on occasion to give details about the project. In August 2011, for example, the engineer gave a highly regarded speech to engineers at Macquarie University that attempted to “myth-bust” some of the popular misconceptions surrounding the project. The video of Ferris’presentation is available online.

The speech became popular viewing material in Australia’s technology sector partially because it directly rebuffed some of the statements being made by the Opposition and other NBN critics, going into areas such as the claim that the investment in the NBN would be better spent on other areas, future bandwidth demands, wireless bandwidth versus fibre bandwidth, the idea that the Coalition’s preferred Fibre to the Node rollout style will be adequate for future needs, and the lifespan of fibre infrastructure. Ferris’ speech was often based on technical evidence accumulated during the executive’s long career.

In mid-April, as NBN Co made a number of other senior executives redundant or accepted their resignations — including NBN Co head of corporate and commercial Kevin Brown, chief financial officer Robin Payne and chief technology officer Gary McLaren — rumours swirled about Ferris’ fate at the company.

At the time, a NBN Co spokesperson claimed that Ferris “remains a highly respected employee of NBN Co” and was “currently providing input to the organisational review within the Chief Operating Officer’s area”. The spokesperson also noted, regarding Ferris: “His former responsibilities have been subsumed across a number of areas, but principally into a new role, EGM Design Authority & Deployment Standards, reporting to the COO. Grant Bowden has been confirmed in this position today. Mr Bowden has widespread experience in planning and strategy for large scale network infrastructure developments.”

However, Delimiter now believes that much of this statement is inaccurate.

Delimiter has received information to the effect that Ferris had been on leave relating to a health condition since a little before the Christmas break in 2013, with the engineer expected to return in April.

In the meantime, however, NBN Co had undergone an internal restructure under its new Coalition-appointed executive chairman Ziggy Switkowski, with Bowden being appointed in Ferris’ place and a range of other senior executives set to leave the company.

It is believed that Ferris was informed in March that his position had been split into three and that he could apply for one or more of those roles. It is believed Ferris did so; however he was unsuccessful in his application and was subsequently made redundant. There is no suggestion that Ferris was unfit for his original role; on the contrary, it is believed the executive was widely respected within NBN Co for his work.

Independent confirmation of Ferris’ departure from NBN Co can be seen on his LinkedIn account, where the executive has written that he is currently an independent consultant with his own business. The LinkedIn profile lists Ferris as having left NBN Co in April this year. “Peter Ferris was formerly part of the Chief Operating Officers team at NBN Co, responsible for the planning & design of the fibre, wireless and satellite networks,” it states.

NBN Co has been invited repeatedly over the past week to issue a statement correcting its initial statement regarding Ferris, but has not done so.

The news comes as the integrity of NBN Co’s corporate approach in other areas has also recently come into question.

Last week, for example, it was revealed that NBN Co had issued a product specification document in which it openly considered the possibility of allowing customers on its planned Fibre to the Node or Basement (FTTN/B) infrastructure to order speeds between 50Mbps and 100Mbps which their connections could not actually deliver. “NBN Co does not intend to prevent end users and/or providers from ordering the ‘Up to 100Mbps’ speed tier for a service that would typically experience speeds of less than 50Mbps,” the document stated.

Communications Minister Malcolm Turnbull has also made statements which the Liberal MP is aware are false several times over the past month.

In mid-April, for example, Turnbull made several statements on the ABC’s Triple J radio station regarding financial projections for Labor’s version of the NBN project which the Communications Minister is aware are false, with the former investment banker inaccurately conflating investment capital and government expenses for the project as well as exaggerating financial figures. Turnbull subsequently repeated some of the same statements on Alan Jones’ 2GB radio show.

Update: NBN Co has issued the following statement in relation to this article. Delimiter stands by its article but wishes to include NBN Co’s views.

“At the time we spoke last month there had been an organisational review of roles in the Chief Operations Operating Officer’s area.

One of the outcomes of that review was that there were various changes including to the planning function. Mr Ferris’s former responsibilities were subsumed across a number of areas, but principally into a new role, EGM Design Authority & Deployment Standards, reporting to the COO.

After an open and transparent process in which Mr Ferris participated, Grant Bowden was confirmed in the new, expanded role. Mr Bowden, as I pointed out, has widespread experience in planning and strategy for large scale network infrastructure developments.

At the time of this decision, Mr Ferris was still a highly respected member of staff at NBN Co and was providing input to the organisational review. Indeed, an offer was made to craft a role suited to Mr. Ferris’s skillset but ultimately he made the decision to leave early this month.

Mr Ferris remains a highly respected individual among all at NBN Co. While disappointed, we respect his decision. We have nothing but praise for his contribution to the company and wish him well in his future endeavours.”

opinion/analysis
I have a few things to say about what has happened here. Surprised? I didn’t think so :)

Firstly, NBN Co’s treatment of Peter Ferris has been disgraceful. We are talking here about a senior engineer and highly respected telecommunications architect who has held high-level roles with Australia’s major telcos. An engineer who did a stellar job getting NBN Co’s network off the ground from scratch and who passionately worked for the benefit of all Australians during the process.

And yet NBN Co, while Ferris was away on sick leave, gave his position to another executive and then invited him to apply for one of three roles for which he was probably overqualified. He was then coldly made redundant.

Let there be no bones about it: This is Ferris’ reward from the Coalition for having successfully designed a quality, Fibre to the Premises National Broadband Network for the previous Labor Government, and for having spoken out publicly about the benefits of that network and the facts relating to its technical architecture.

When you realise that over the past few months, Turnbull and NBN Co have also turfed or accepted the resignations of most of the company’s board, its CTO, CFO, COO and head of corporate and commercial, a bigger picture starts to emerge.

As I wrote in November last year (Delimiter 2.0 article), NBN Co’s hiring process has now become completely politicised. If you are a senior employee of NBN Co, it clearly no longer matters whether you are good at your job or whether you are respected in your industry or by your peers. What appears to matter now, and what will determine how you are treated, is to what extent you have high-level support from NBN Co’s top ranks, many of whom have direct links to Turnbull personally. Don’t expect to be able to discuss the project in public without considering this issue. People are watching and will take steps in future if you say the ‘wrong’ thing.

The second thing is that we’re now seeing the lack of integrity, transparency and honesty which Turnbull and other senior figures in the new Coalition Government have been recently displaying spreading down the ranks to government-owned companies such as NBN Co.

I can say categorically that NBN Co would not have treated its staff in this manner under its previous chief executive Mike Quigley, who was a man of stalwart integrity. And it certainly would not have misled the public about the status of those staff, whether this was intentional or not. This dishonesty on NBN Co’s part — which we also saw recently with respect to its FTTN/FTTB product specification — is a new thing, which has only crept into its approach under the Coalition.

I personally view NBN Co’s new chief executive Bill Morrow as a man of honour, and I have always found him honest and up-front in his time leading Vodafone Australia. I wish him well and good luck in his role.

However, I will also leave Morrow and other members of NBN Co’s senior executive team with a warning at the end of this article: Do not think you can get away with misleading the Australian public in this way further. If NBN Co makes statements in public which are inaccurate, the media will find that out and we will publish the truth. Your own reputation will suffer as a result.

Australia still has a relatively free press — at least, for the moment. My role in that free press is to hold powerful interests to account and represent the interests of Australian technologists. Technologists such as Peter Ferris, who should be being accorded the respect he so clearly deserves, but was instead handed his marching orders. Mr Morrow, you must not allow this kind of situation to happen again.