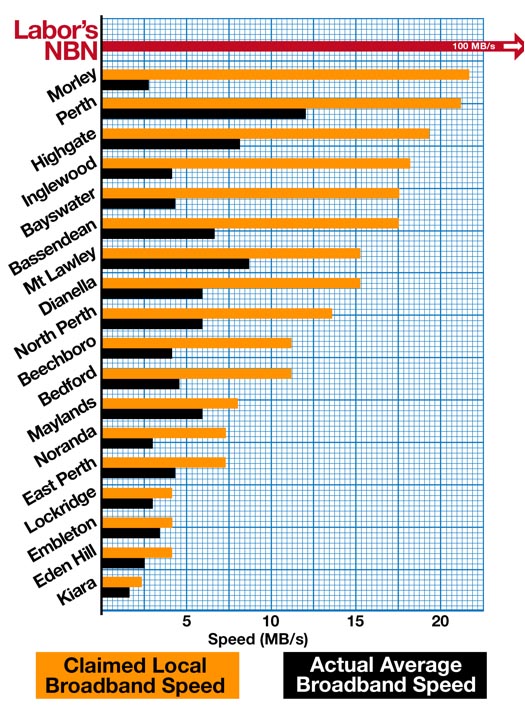 news The Australian Labor Party has published what it claims is further evidence that the MyBroadband broadband availability site launched by Communications Minister Malcolm Turnbull in February is significantly inaccurate, with average broadband speeds in the Federal electorate of Perth universally below the data produced by the site.

Turnbull launched the MyBroadband website in February as the culmination of a significant study conducted by the Department of Communications into the availability and quality of broadband in Australia. The study was an election promise by the Liberal MP contained as part of the Coalition’s broadband policy unveiled in April 2013 ahead of last year’s Federal Election.

Neate and a group of other volunteers conducted analysis on the data collected and published an extended document submission to the Senate Select Committee on the National Broadband Network. The vast majority of those making submissions (688 out of more then 800) were using ADSL broadband, the most popular form of broadband in Australia. Of those, analysis conducted by the group showed, most participants experienced real-life speeds more than 25 percent slower than the estimates generated by the MyBroadband site.

Last week, in the lead-up to the Western Australian Senate by-election, the Opposition published a second, much smaller study, which appeared to show the same inaccuracy trend in the MyBroadband tracker.

Federal Member for Perth, Alanna MacTiernan, said in a statement that she had surveyed nearly 200 homes in her electorate and found “disturbing” differences between the Internet speed that the MyBroadband tracker claimed was available and the actual speed that locals could get access to, as shown in the chart above.

“Mr Turnbull is deluding himself about the true state of the copper wire,” MacTiernan said. “A new survey of locals around Perth has shown the dilapidated state of the copper network that the NBN is now forced to rely upon.” The Coalition’s Broadband Network policy will involved extensive reuse of Telstra’s copper network as part of the use of the Fibre to the Node rollout style, which is technically inferior when compared to Labor’s Fibre to the Premises model.

“Our survey shows that the actual speeds in all suburbs are far less than Mr Turnbull’s claim in his Broadband Quality and Availability Review,” MacTiernan added. “Residents in many areas across the electorate report that even phone services over the copper wire are unreliable, and what limited internet is available drops out.”

Shadow Communications Minister Jason Clare said the Coalition was creating two classes of people — those that will get “the real NBN” and those that wouldn’t. “Under Labor all homes and businesses in Perth would have received fibre to their premises. Now only some homes and businesses will get this,” he said. “Everyone else will have to rely on the second rate old copper system. The NBN is now effectively dead. Some people will get the real NBN, others will get the second rate old copper system.”

Shadow Assistant Minister for Communications Michelle Rowland added: “Tony Abbott seems to be stuck in the past. He wants to bring back knights and dames, but refuses to invest in things like the NBN which will set WA up for the future.”

opinion/analysis
I think it’s important to acknowledge here that this data supplied by Labor is hardly scientific. We have absolutely no information at this point about how this data was collected or tabulated. And, of course, Labor has an obvious incentive to publish data which pushes its political aims. In this sense, I would regard it as quite suspect.

However, in a general sense, this isn’t what matters. It’s not the specific results in a certain suburb or even electorate which will illustrate the overall usefulness of Turnbull’s MyBroadband tracker. It is the overall picture generated about the extent to which the site is accurate that matters. Labor’s survey released last week contributes to that overall picture and is therefore useful.

As I wrote in February: