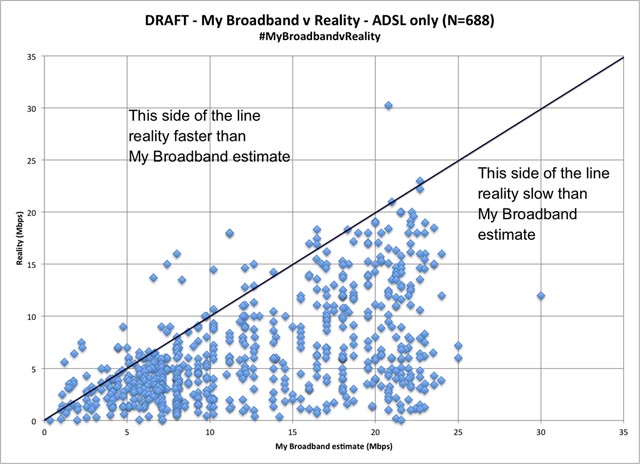 news A crowdsourced comparison of real-world broadband speeds has appeared to show that the MyBroadband broadband availability site launched by Communications Minister Malcolm Turnbull last week is significantly inaccurate, with speeds being almost universally below the data produced by the site.

Turnbull launched the MyBroadband website last week as the culmination of a significant study conducted by the Department of Communications into the availability and quality of broadband in Australia. The study was an election promise by the Liberal MP contained as part of the Coalition’s broadband policy unveiled in April 2013 ahead of last year’s Federal Election.

While the data is still being tabulated, early charts of the data such as the one displayed above (click the image above for a larger version) appear to show significant variance of the estimated and real-world speeds supplied by participants, especially when it comes to ADSL broadband. Neate herself has the same problem.

“… for me, those figures were not even close, on a good day we get 6Mbps, if it is raining we get NOTHING,” wrote Neate in a blog post on the issue. “Going to [the] Mobile Broadband area it says we have 3G & 4G Coverage? Umm no 4G here mate. So obviously I asked around, put it out there on Twitter & bloody hell, the avalanche of different figures, some even saying that the site said broadband was not available & they could actually get it LOL!”

Another popular blogger, dubbed ‘Wolfcat’, noted that they had a similar issue with the site, criticising its “overly optimistic” ADSL speed listings. “My area is listed at 12.2Mbps. Congrats to those in my neighbourhood getting those speeds, but sure as hell I am not,” they wrote. “Nor does this speed factor in things such as many peoples ADSL slowing down when it rains for example. I get 4.5Mbps, according to this funny thing called Speedtest.”

opinion/analysis
The interesting thing about this crowdsourced data that has come through regarding the MyBroadband site is not that it shows that the Government’s data is inaccurate. That’s to be expected; as Turnbull himself pointed out at the site’s launch press conference, the site uses estimates and not real-world measurements to give Australians a picture of broadband availability in their areas. By definition, it cannot yet deliver totally accurate data.

And we wonder what impact these new data sources will have on the debate about the potential speeds achievable in a Fibre to the Node scenario for the Coalition’s Broadband Network project.