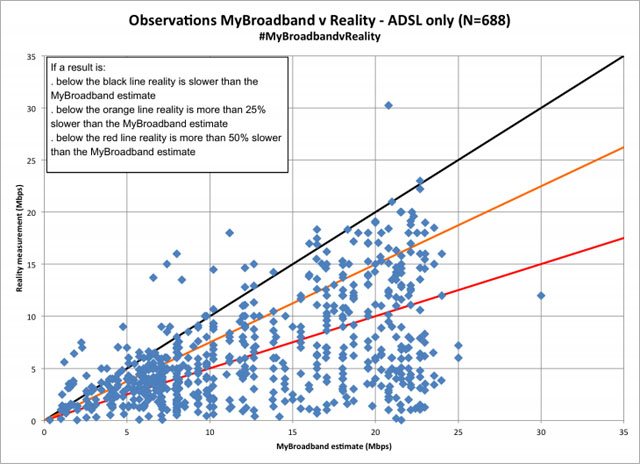 news The final analysis of a crowdsourced comparison of real-world broadband speeds has shown that the MyBroadband broadband availability site launched by Communications Minister Malcolm Turnbull last month is significantly inaccurate, with most Australians receiving speeds more than 25 percent slower than those listed.

Last week Neate and a group of other volunteers conducted analysis on the data collected and published an extended document submission to the Senate Select Committee on the National Broadband Network. The full PDF of the submission is available online, as well as the raw data used.

The vast majority of those making submissions (688 out of more then 800) were using ADSL broadband, the most popular form of broadband in Australia. Of those, analysis conducted by the group showed, most participants experienced real-life speeds more than 25 percent slower than the estimates generated by the MyBroadband site.

One of the recurring themes mentioned by participants in the survey was rain, and how water could affect the reliability of ADSL connections. The submission states:

“For people with ADSL, ‘rain’ was mentioned 63 times. Extreme heat also caused people’s connections to either drop out or cease totally, requiring a call to Telstra. Considering the amount of extreme weather this country experiences (in particular drought and flooding), this should be paramount to any decision-making in regard to what infrastructure would work best for which location, as well as ensuring what is currently in use has not already been irreparably damaged. In
some cases like the below, it is not just the internet but the phone line as well, making small business very difficult.”

One submitter wrote that they were receiving around 6Mbps download speeds from their ADSL connection, although the MyBroadband site had predicted around 12Mbps. “Try running a small business from home when the faulty copper wire connection keeps failing after every moderate fall of rain,” they wrote. “Phone line quality impossible, internet experiences problems and we can never consider video for Skype. Even voice Skype connections are often poor.”

Another was receiving real-world speeds of 3.4Mbps, where the MyBroadband site had estimated around 7Mbps. “I have never seen speeds about 4Mbps where I live,” they wrote. “I have excellent equipment and service with iiNet. Everytime it rains heavily my speeds get slower. When the temperature breaks 35 degrees my Internet stops working.”

In general, the submission made a number of recommendations to the Senate committee examining the NBN project and its successor, the Coalition’s Broadband Network, ranging from the need to consider environmental weather conditions, to the need to consider broadband as being critical infrastructure, that an accurate map of existing broadband infrastructure be published, and that other factors such as network congestion and the quality and reliability of Telstra’s copper network also be considered.

The submission concluded: “Considering the purpose of the MyBroadband site is to get a realistic picture of the current network and give priority to the communities most in need. It would stand to reason that weather extremes, which affect the whole nation, should be taken into account when planning a National Broadband Network.”

“We are very concerned that decisions will be based on results showing on the MyBroadband site that we have found are not quite the reality people are experiencing,” the submission states. “We would be remiss if we did not share our data from real people with the Senate Select Committee on the National Broadband Network.”

“In regard to My Broadband being used to prioritise, we think our survey adds value as it would seem that many assumptions made on the My Broadband site in their methodology area seem to be disconnected from the evidence and it would appear to us that you can’t have evidence-based policy if you ignore the evidence?”