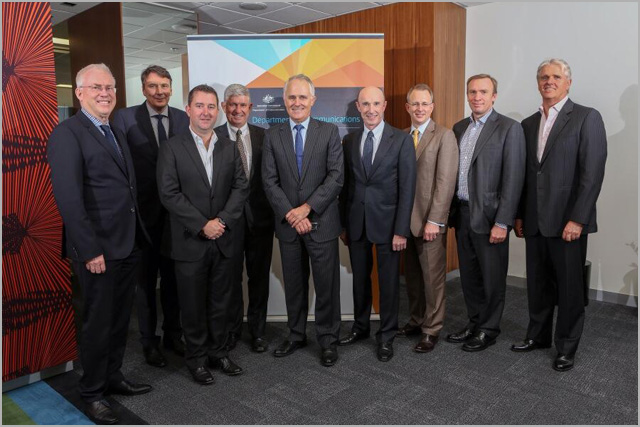 opinion Communications Minister Malcolm Turnbull’s new Ministerial Advisory Council last week features representatives from virtually every major Australian telecommunications company of any note. But the group most important to the future of the Australian telco sector — consumers — appear not to have been invited.

Last week, Australia’s new Communications Minister held the first meeting of what he dubbed in a celebratory series of press releases and Tweets as his new ‘Ministerial Advisory Council on Communications’.

According to Turnbull, the big MACC will play a key role in helping to shape national telecommunications policy over the next three years, supplying the Government with an industry perspective on key areas for reform and deregulation, as well as helping it boost productivity and reduce the cost of doing business.

It’s a power-packed group. You certainly wouldn’t want any sort of accident to have happened at Turnbull’s office on Friday. The nation’s telco sector would have been devastated, to say nothing of the sheer volume of luxury Pierre Cardin suit material and silky T. M. Lewin ties which would have been shredded.

According to a statement issued by Turnbull’s office, the group got right down to ‘business’ in discussing how the telco sector, one of the most heavily regulated in Australia, could have its regulatory burden cut down.

“Members of the Council welcomed the Government’s move to free business from the burden of unnecessary and duplicative regulation, the first tranche of which will occur on the upcoming Repeal Day on 19 March before a broader deregulation process throughout 2014,” the Minister’s statement said.

“The discussions went beyond removing red tape and regulation and covered how industry and government working together can provide greater leadership for Australian innovation particularly in the digital domain. The Coalition is committed to lowering the cost of business, reducing red tape and enhancing productivity and innovation while ensuring that consumer safeguards are kept in place.”

A similar power-packed meeting was held with media industry executives; you can find that photo here.

Now, I want to mention two things about these meetings that took place last Friday. Firstly, jeez! The top ranks of Australia’s telecommunications and media industries are a total dudefest! Despite the fact that many high-profile and capable women work in both industries, Turnbull met almost exclusively with white, middle-aged males on Friday (with a single exception at the media talks), proving once again that the glass ceiling inherent in Australia’s private sector is still very strongly in place.

Can it really be the case, that out of several dozen of Australia’s top-ranking media and telecommunications executives invited to these talks, only one woman attended? That feels like a bit of a shocker. I’d like to see a much higher representation of women at these talks, as well as representatives from minority groups. As a nation, Australia is not 100 percent composed of middle-aged white males, and I don’t think any major advisory council to a Minister should be either.

Secondly, I want to note that the talks held last week included not representatives of consumer groups. If you examine the list above, and the full list of invitees published in this media release issued by Turnbull last week (PDF) on the setup of the two advisory councils, what you’ll find is that nowhere on these lists are there any consumer groups.

It must be said that Australia has several highly visible organisations which would be highly relevant to this situation. Firstly, there’s the Australian Communications Consumer Action Network (ACCAN), which dubs itself as being the nation’s peak body for consumer representation and advocacy in communications. Funded directly by the Federal Government to help protect consumers from the sometimes extreme behaviour shown by our telcos, ACCAN would no doubt have a wide range of views to put to the Minister on deregulation in the telecommunications sector.

There’s also CHOICE, the independent consumer rights organisation which constantly advocates on a wide range of issues for consumers, including frequently on issues in the telecommunications portfolio.

And there are also a bunch of other, less visible groups representing consumers’ rights, ranging from Electronic Frontiers Australia, which focuses on digital rights (often touching on the telecommunications industry), the Internet Society of Australia, a user-focused organisation which promotes the development of the Internet in Australia, and even the government-funded Telecommunications Industry Ombudsman, a government-funded group which acts as a dispute resolution service for consumers who have a complaint with a telco.

None — not a single one — of these organisations was invited to be part of Turnbull’s Ministerial Advisory Council on Communications.

The problem is, as anyone who’s ever examined Australia’s telecommunications laws will attest, much of the current regulatory code is directly aimed at protecting consumers.

Australia’s telecommunications and competition laws have stipulations designed to make sure that no one telco can get total control of a segment of the market and abuse that control as a monopoly. There are stipulations designed to ensure fair access to other carriers’ infrastructure. There are stipulations about how consumers should be treated and how telecommunications carriage services which interact with other services should function, again, so that competitive telcos and consumers are not unfairly impacted.

There are even laws ensuring that those who live in rural and regional areas are able to achieve a basic quality of telecommunications services, under a policy entitled the Universal Service Obligation, which sees the rest of the industry taxed so that Telstra can afford to provide services to the bush.

These regulations have been built up painstakingly over the past two decades, through a series of parliamentary legislative efforts, through decisions by the Australian Competition and Consumer Commission, and through the courts, which have also made a stack of decisions over the years in these areas.

In general, I agree with Turnbull that the telecommunications industry is highly over-regulated, and that there are countless provisions that could be wound back because they have been proven to be dysfunctional or are counter-productive or just out of date. You can find a few lists of some of the regulations the telcos think need to be changed in their submissions to the Department of Communication’s review of regulation in the sector.

However, I also think that the telco industry itself — with its billions and billions of dollars in annual profits — should not be the only group providing advice to the Minister on this issue. There are other important stakeholders to this situation, and those stakeholders are mainly consumers. If a regulatory decision goes very wrong, the type of billion-dollar corporation represented on the Minister’s Advisory Council so far will be able to weather the impact. But your average Australian residential or small business customer may not.

We’ve seen this approach from the Federal Government before, and from both sides of politics. Under the previous Rudd and Gillard Labor administrations, consumer groups — including some of the ones I mentioned above — were explicitly blocked from attending secret talks held by the Attorney-General’s Department on Internet piracy. And it appears as though new Attorney-General George Brandis is now taking the same approach that his predecessor, Labor Attorney-General Mark Dreyfus, did.

However, I have to say, and I think most consumer groups would agree, that this just isn’t good enough. I’ve contacted the Minister’s office this morning and asked for a comment on whether consumer groups will be given an equal voice in the Government’s plans to pursue deregulation in the telecommunications sector, as well as inviting the Minister to comment on the lack of representation by women or minority groups on his advisory councils. I recommend you do too.

Major companies have an easy path to the ears of politicians: They have money, which buys them influence. As individuals, most consumers don’t enjoy the same level of wealth, and so often get locked out of these discussions by default. It’s only when we raise our voice en-masse that those in power listen to us. And if enough of us say the same thing, even powerful Ministers like Turnbull will have no choice but to listen.

Update: Delimiter has received the following comment from the Office of Communications Minister Malcolm Turnbull in relation to our questions:

“The Government is conducting a thorough process of consultation on the deregulatory process, which has seen input from a number of consumer groups. Many of those submissions have been published on the communications.gov.au website. It is important to remember that the Ministerial Advisory Council was created to get feedback from industry. It is an important contributor in the ongoing process of consultation.”