news A substantial conflict of interest issue has arisen regarding the participation by the sole consumer group invited to attend the Government’s secret Internet piracy talks, with the group’s chairman attending the meetings also currently leading the peak national organisation devoted to advocating copyright on behalf of creative professionals.

On Thursday this week, major Australian ISPs will sit down with representatives of the film, television and music industries in a closed door meeting arranged by the Federal Attorney-General’s Department, with the aim of discussing a potential industry resolution to the issue of Internet piracy. The meeting will be the fifth such meeting to be held, after a series of other meetings were held late last year under similar circumstances.

The Attorney-General’s Department has in the past kept the meetings heavily under wraps and has explicitly denied requests to attend the meetings by consumer groups. However, yesterday the Australian Communications Consumer Action Network, which is itself funded by the Federal Government, confirmed it had been invited to attend the latest round of talks.

However, a substantial conflict of interest issue has emerged regarding ACCAN’s attendance at the talks. ACCAN has stipulated that it will be represented by staffer Jonathan Gadir, its in-house acting director of Policy & Campaigns. However, yesterday it emerged that the organisation’s chairman, UTS law professor Michael Fraser (pictured), would also be attending the talks. 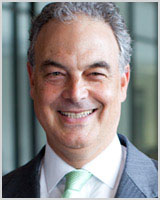 It is believed that Fraser will be attending in his role as director of UTS’ Communications Law Centre. However, in May this year, Fraser was also appointed chairman of the Australian Copyright Council. The Australian Copyright Council is a major national organisation established in 1968 and devoted to advocating on copyright issues on behalf of the creative industries — Australian writers, musicians, photographers, artists, journalists, film-makers and architects.

The group has an active role in influencing copyright policy in Australia, and this role sees it advocate strongly for the rights of the creative industries. For example, in a submission to the Federal Government’s Convergence Review earlier this year, the Copyright Council argued that under proposed changes to Australia’s Safe Harbour scheme, it was an important element that Australian Internet service providers should “adopt and reasonably implement policies to avoid liability for authorisation” of copyright infringement, “including termination, in appropriate circumstances, of the accounts of repeat infringers”.

The issue of whether ISPs should terminate the accounts of users who can be demonstrated to infringe copyright is an extremely inflammatory one, and very few Australian ISPs will actively take such action, typically seeing it as being against the rights of users. The issue is likely to be one which has been and will again be discussed at the talks being held by the Attorney-General’s Department. And is is likely that ACCAN will argue against the need to terminate users’ accounts for repeated Internet piracy activities.

Fraser also has an extensive background in copyright protection in general in Australia. He has been a director of the Australian Copyright Council since 2001, and was also a founder and CEO of the Copyright Agency Limited for 21 years. CAL is an organisation which seeks to collect copyright fees and royalties for copyright holders in Australia, including journalists (disclosure: Delimiter publisher Renai LeMay has received fees from CAL for re-prints of articles he wrote when employed by the Australian Financial Review).

“Whilst including ACCAN as the consumer representative is a step in the right direction in addressing concerns that consumers will be represented, we can’t help but feel that they are a poor choice,” wrote the organisation’s deputy president Simon Frew in an open letter to the Attorney-General’s Department on the issue. “Their chairperson is Michael Fraser who has also just been named chairperson of the Australian Copyright Council. He is not a representative of consumer interests and it is hard to see an organisation that he leads will be an impartial and fair advocate for consumers.”

“Due to the secrecy surrounding the negotiations so far, we are concerned that the agreement will be unbalanced in favor of rights holders and old media at the expense of consumers. Our attempts at finding out details through a Freedom of Information request was met with many pages completely blacked out, exacerbating our fears that consumers’ rights will be trampled on.”

In response, a spokesperson for the Attorney-General’s Department wrote to Frew, denying the Pirate Party’s request to attend the secret talks, but holding out the possibility of greater public participation in later talks. “Please be assured that arrangements for the roundtable discussion to be held on 7 June 2012 specifically include a number of participants from several consumer representative bodies,” they wrote.

opinion/analysis
It’s hard to see what bigger conflict of interest there could be in these talks, than for the chair of the consumer group attending the talks to also be representing the creative industries, and I feel very strongly that Michael Fraser must recuse himself immediately from attending the talks held by the Attorney-General’s Department.

Fraser’s defence in this case would no doubt be that he is attending the talks in his role as director of UTS’ Communications Law Centre. However, it is my strong personal opinion that that it is impossible to separate Fraser’s role at UTS from his other roles chairing both the Australian Copyright Council and ACCAN. This is the same person, after all.

It is possible to argue that ACCAN’s staff representation at the talks, Jonathan Gadir, will act independently of Fraser, and this is no doubt the argument that ACCAN would make in this case. However, Gadir could hardly help but be aware that ultimately Fraser is, in some form, one of the figures overseeing ACCAN in general. Ultimately, all staff at ACCAN are accountable to the organisation’s board, and Fraser chairs that board.

In general, ACCAN and the Australian Copyright Council are organisations which represent very different and conflicting interests. It bears noting that the content industries, which the ACC represents on issues of copyright, have long been debating what legal action should be taken against the telecommunications consumers represented by ACCAN. We’ve seen this issue play out in the High Court courtesy of iiNet’s legal defence against the Australian Federation Against Copyright Theft. Fraser cannot be unaware of this fact, as he is an expert in copyright law; and I believe he should seriously consider the fact that his dual roles chairing ACCAN and the ACC place him in an unavoidable and ongoing conflict of interest situation.

There is also a wider issue here. Why has the Attorney-General’s Department invited a UTS professor to attend these talks, but not opened the talks to the wider public? It increasingly seems as as if the list of those who are allowed to attend these secret talks is a highly exclusive one. The longer they go on without the involvement of the public, and without any information from the talks being made available, the longer this whole process becomes increasingly compromised. And I, for one, am tired of it.