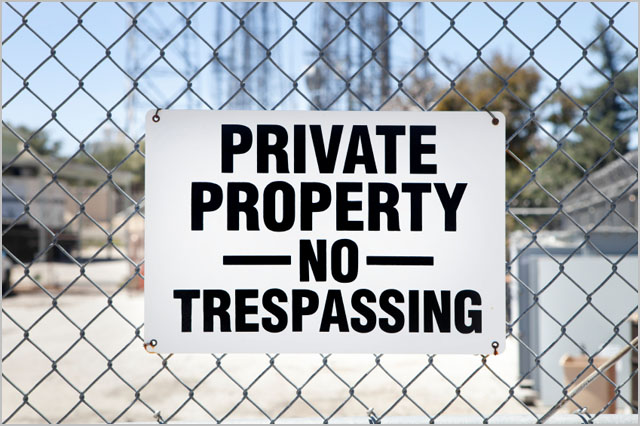 news The Federal Government has revealed it denied requests by consumer organisations to attend a secret meeting held between the content and telecommunications industries to address the issue of illegal file sharing through avenues such as BitTorrent.

The meeting, held on 23 September, saw major Australian ISPs sit down with the representatives of the film, television and music industries with the aim of discussing a potential industry resolution to the issue of online copyright infringement. The issue has come to the fore over the past several years due to the high-profile court case on the matter ongoing between iiNet and the Australian Federation Against Copyright Theft.

However, in documents released today under Freedom of Information laws to the Pirate Party Australia, the Federal Attorney-General’s Department, which hosted the meeting, revealed a representative of several public interest groups — the Australian Communications Consumer Action Network (ACCAN) and the Internet Society of Australia (ISOC) had requested to attend the meeting and been denied.

On the 8th of August this year, following media reports that the meeting was to be held, an individual representing both groups requested to participate in the 23 September meeting, the briefing documents revealed. The individual’s name was censored in the FoI documents. The documents are available in full at the website of the former president and current treasurer of the Pirate Party Australia, Rodney Serkowski, who issued the FoI request for the documents. Delimiter has also issued a similar FoI request and was advised this week that many of the same documents would be released this week to the Pirate Party.

“However, [AGD staffer Peter Treyde] advised that the upcoming roundtable will be an initial meeting to gauge the Internet service provider and copyright owner positions and obtain an update on the progress of their discussions to date,” the briefing notes state. “Mr Treyde advised that the Department will consult with relevant consumer groups once industry discussions have reached an appropriate stage.”

“Consumer representatives were not invited to the upcoming meeting as it will be an initial meeting to assess the industry’s progress toward a solution,” the document added. “This was not an oversight.”

The FoI documents did go some way towards revealing the identity of the organisations which attended the September meeting, although the department redacted the names of the individuals who attended.

The briefing also discussed solutions in other countries, but the documents also revealed that the Attorney-General’s Department hoped to frame the discussion on the day through the lens of the so-called “six strikes” policy to tackling online copyright infringement agreed between the content and ISP industries in the US this year.

A copy of the US memorandum of understanding, as well as briefings about how other jurisdictions handle the issue, was circulated in detail to participants before the meeting.

Although the various positions of the different groups espoused at the meeting appeared to have been detailed in the FoI documents but redacted in full by the department. In documents detailing its reasons for doing so, the department noted in general material from the documents had been deleted or not released because of the early stage of the discussions. The Attorney-General’s Department has previously declined a Freedom of Information request for the minutes of the meeting, stating that no minutes of the event exist.

“At this preliminary stage of the process, discussions are taking place, discussions involving various stakeholders with competing interests,” the department wrote. “It is worth noting that these discussions have not yet been completed … The discussions, therefore, are at a very delicate, sensitive and important stage.”

“Disclosure of documents while the negotiations are still in progress would, in my view, prejudice, hamper and impede those negotiations to an unacceptable degree. That would, in my view, be contrary to the interests of good government — which would, in turn, be contrary to the public interest.” Some information was also redacted because it might lead some parties concerned to not disclose information to the Government in future, or to protect individuals for personal reasons.

In general, the information released in the documents was consistent with the statements by former Federal Attorney-General Robert McClelland (the post is now held by Nicola Roxon following a cabinet reshuffle) that the government preferred an industry-based solution to the issue of online copyright infringement. In addition, speaking notes by both McClelland and departmental secretary Roger Wilkins for the event emphasised that consumer groups and interests should be paramount in any such industry solution.

However, the documents also emphasised a desire for copyright infringement issues to be addressed through societal change. The issue is particularly contentious at the moment due to the ongoing court case between iiNet and the Australian Federation Against Copyright Theft, which is slated to hit the High Court, in AFACT’s second appeal following unsuccessful rulings, later this year. AFACT is attempting to hold iiNet responsible for the piracy actions of its users.

“Regardless of the High Court outcome in Roadshow Films Pty Ltd v iiNet Limited, illegal file sharing will continue,” speaking notes prepared for McClelland for the event state. “Practical steps must be taken to educate and deter people from accessing unauthorised content. Any solution should “be educative and aim to change social norms”.

AGD’s FoI document detailing the attendees at the meeting (individual identities have been redacted): 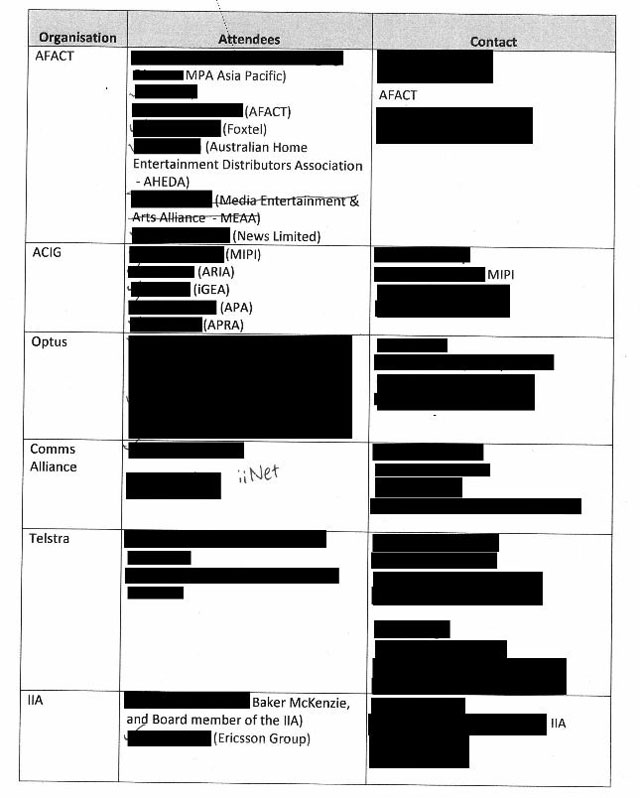