This article is by Sean Rintel, lecturer in strategic communications at the University of Queensland. It originally appeared on The Conversation.

Social media users have since shared the petition rapidly and widely. The petition had garnered 1,000 signatures by the end of September 7, but in the five days since, that number has surged to more than 216,000 signatures, climbing as fast as one name per 3.5 seconds.

In rejecting the petition in a blog post on his website, Turnbull not only brought on rancour about the perceived superiority of a FTTP NBN over the Liberal National Party’s slower fibre to the node (FTTN) NBN – which uses optic fibre to cabinets placed around neighbourhoods, and existing copper wire from cabinets to buildings – but also appeared to dismiss democratic debate outside of elections. Furore has erupted over Turnbull’s snarky response to Twitter user Phillip Tyson: 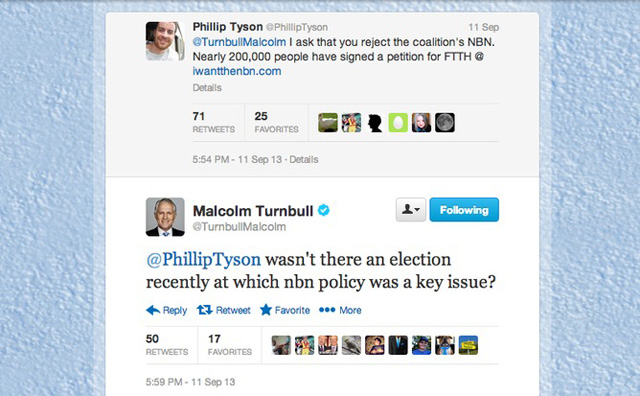 While some commentators claim that such mobilisation is of limited value, perhaps even just slacktivism (internet users who support or protest a cause in a way that often requires little to no effort), civil society groups such as Electronic Frontiers Australia (EFA), of which I am a board member, strongly reject this position.

Journalist Josh Taylor at ZDNet points out that the largest Change.org petition prior to the current one was that asking advertisers to cease associating with 2GB radio station’s shock-jock Alan Jones. Taylor notes that:

Although 2GB temporarily suspended advertising on the station, and some advertisers left, Jones’ show continues, and his audience share remains relatively stable.

Taylor also points out that “joke petitions” to politicians are on the rise, such as calling on the White House to build a Death Star earlier this year (which elicited a response). The implication of both points is that the value of such petitions is diluted, at best, and may be self-diluting given the combination of knee-jerk reactions and irony at which users excel.

But when it comes to internet issues in particular, such petitions and social media action can have profound effects. The best example is the 2012 backdown of both House and Senate backers of the draconian Stop Online Piracy Act (SOPA) and PROTECT IP Act (PIPA) in the face of a 4.5 million signature petition from Google and the concurrent day of the Internet Blackout. This was the largest and most successful online protest in history, effectively crushing the political will to push though the bills.

As a crude comparison, the 4.5 million signatures on the Google petition (from a global audience) represented about 1.4% of the population of the United States (313.9 million). The 236,361 (as of September 14) signatures on the NBN petition represent 1.04% of Australia’s 22.69 million population. So in terms of proportional raw interest, the Australian NBN petition should be treated by Malcolm Turnbull as extremely significant.

Further, it should be treated as a spur to those engaged in social activism that their cause does, indeed, have momentum. Of course, one difference between SOPA/PIPA and the NBN petition is that SOPA/PIPA had a direct and easily measurable aim: stopping the bills being signed. Australian NBN activists have a much tougher road ahead to push for a FTTP NBN, which has been vigorously opposed all along by the Coalition.

But social activists should not be deterred. The most practical and valuable action that FTTP NBN supporters should propose is for the Liberal National Party to expand the scope of its proposed review to determine the costs and timeframe of the current FTTP NBN. The review’s current process is rather opaque and thus potentially a rubber-stamp exercise for the new government’s FTTN plan:

There will be a strategic review conducted within the next 60 days which will show how long it will take and how much it will cost to complete the NBN on the current specifications and what that means both to the taxpayer and to the consumers.

The new government could begin to mend some of the damage to its brand – and Turnbull’s brand in particular – by increasing the transparency and scope of the review to include civil society groups and extensive community consultation. Clearly groups such as EFA would wish to be involved, but so might other groups and constituencies. 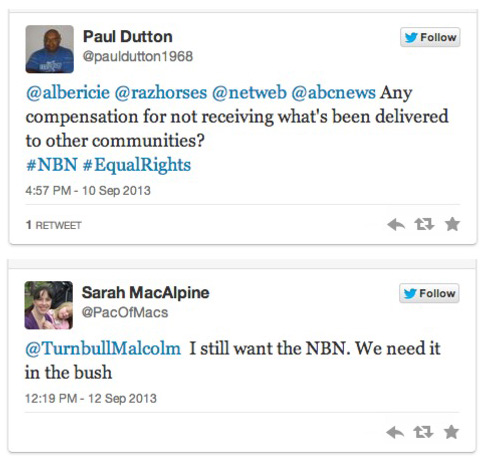 Malcolm Turnbull may believe that democracy has spoken; but now is the time for democracy to shout back. The Storify collection below shows a reasonable sample of the social media activity on this issue. As well as more of the introductory material, the collection shows some of the variation in anti-Turnbull sentiment:

Sean Rintel is a Board Member and Life Member of Electronic Frontiers Australia. This article was originally published at The Conversation. Read the original article.