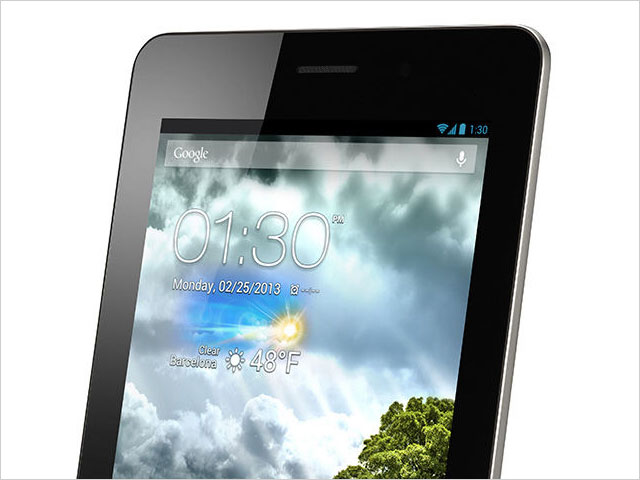 review ASUS has been doing a great job manufacturing Google’s stellar Nexus 7 tablet over the past year or so, finally bringing to market a model that can challenge the dominance of Apple’s iPad. But the company’s own-branded Android tablets haven’t fared as well. Can the Fonepad take its place alongside the giants of the tablet world? Read on to find out.

Design
On a superficial level, the design of the Fonepad is very similar to its sister product, the first-generation Nexus 7 which ASUS co-developed with Google. You get a similarly sized 7″ tablet, with almost exactly the same dimensions (the Fonepad measures 196.4 x 120.1 x 10.4 mm), exactly the same weight, and with the screen, buttons and so on in quite similar places. It’s all quite familiar if you’re handled a few Android tablets. The on/off button and volume rocker is on the tablet’s left-hand side, there’s a speaker on the back and front, a camera on the front above the screen and one on the back, software buttons below the screen and a micro-USB port and 3.5mm headphone jack on the unit’s bottom.

We’re in home territory here for Android fans — nothing’s out of place, everything’s in its right spot, and you’re not going to have to fiddle to find what you’re looking for.

The main difference in a design sense between the Fonepad and the Nexus 7 is the back cover, and to be honest this does make a substantial difference between the two models. The Nexus 7 has a lovely ‘leathery’ back which is very grippy and lovely to hold. Quite a few reviewers have compared the Nexus 7’s back casing favourably against the slippery metal back of the iPad and iPad mini, which slips out of your hands a little too easily for comfort, sometimes.

With the Fonepad, ASUS has gone back to the iPad model — the back of the unit is brushed aluminium (in ‘Titanium Gray’ or ‘Champagne Gold’). It feels quite classy, but it is slippery, and we prefer the Nexus 7’s rubbery approach. The other main difference between the Fonepad and other models is that the rubbery ‘cap’ at the top of the aluminium back can be removed to gain access to a 3G SIM card slot and a microSD card holder.

Overall we’d say the Fonepad has a very solid design, but not one that makes it stand out in the market, and we’d advise users to beware of its slippery back.

Features
In terms of its features, the Fonepad is about what you’d expect from a 7″ tablet in late 2012 to early 2013. This means that it won’t break any speed records, and it’s already behind the latest models to come out of some manufacturers, such as Google itself, which just launched its new version of the Nexus 7 locally.

Probably the main difference feature-wise between the Fonepad and the Nexus 7 is ASUS’ choice of CPU. The Fonepad comes with an Intel Atom Z2420/1.2GHz model for the 8GB model shipping in Australia, or a slightly higher clocked Intel Atom Z2460/1.6GHz CPU on the 32GB model. The old Nexus 7, on the other hand, came with a quad-core Tegra 3 CPU and the new one with a Qualcomm Snapdragon S4 Pro at 1.5GHz.

The Fonepad comes with a 7″ WXGA (1280×800) LED backlit IPS screen, which is looking a little out of date compared with the new Nexus 7’s 1920×1200 resolution. Its cameras are also out of date compared with other tablets on the market (it’s got a 1.2 megapixel front-facing model and a 3 megapixel rear-model), and its battery is a hefty 4270mAh model.

Probably the Fonepad’s hero feature is its support for 3G mobile broadband on Australian telco networks, with the model supporting the HSPA+ standard for theoretical download speeds of up to 21Mbps and upload speeds of 5.76Mbps. Most Android tablets we’ve seen launch in Australia don’t support a 3G connection. However, even this specification is a little sub-par when you consider that the iPad mini offers 4G support in Australia. And of course you get support for all the other common radio standards — Bluetooth 3.0, 802.11 b/g/n Wi-Fi and so on. Android 4.1 is included, although we’re sure an upgrade to 4.2 or 4.3 is on the cards.

Look, we’re going to have to say this flat out. The Fonepad offers quite similar specifications to Google’s previous generation Nexus 7 tablet. This wouldn’t be a problem, as the Nexus 7 was a market leader, except for the fact that the Fonepad has launched in Australia almost 12 months after the Nexus 7 first launched here. The new Nexus 7, which launched locally last week, is priced similarly to the ASUS Fonepad but has greatly improved specifications over it, including a world-beating screen.

In this context, we’re going to have to say that the Fonepad’s specifications just look quite dated compared with its main competition, which is the ASUS-manufactured new Nexus 7. There’s not much point comparing the Fonepad to other rival tablets such as the iPad mini, when its own sister tablet just looks like a much better model.

Performance
In general, the Fonepad performed quite well in practice when we were testing it. Its battery life is quite solid; it’s easily in the class of tablet that you can just leave lying around for a week or more on end without really thinking about whether or not the battery is going to survive (similarly with the Nexus 7 and iPad mini), and although it’s really awkward when used for the purpose without a Bluetooth headset, you can indeed use it to make and receive calls, although we seriously doubt that many people are going to buy a 7″ tablet for that purpose.

Its camera is a weak point — three megapixels is just not enough for a tablet which is likely going to be doing duty as a household happy snap machine (as our own iPad mini is), but the Fonepad does take serviceable 720p video, with decent audio recording. Sure, the old Nexus 7 didn’t have a rear camera, so the Fonepad improves on that situation, but the new one does (five megapixels), and the iPad mini also has a five megapixel model.

The Android operating system on the Fonepad is pretty close to the stock Android experience found on the Nexus 7, but ASUS has added a few little tweaks here and there. The tweaks are just obvious enough to be annoying, if you’re a habitual Nexus 4 or Nexus 7 user as your writer is, and as always we vastly prefer Google’s stock ‘Nexus experience’ to anything other vendors come up with. However, if you like the stock ‘Nexus experience’, you’re not going to be as annoyed as you might be with the heavy over the top layers which companies like Samsung and HTC add on to Android.

And in the hand, the Fonepad feels nice. It’s decently light, its design is quite standard while still being classy, and we enjoyed using it.

The problem, however, is that none of the Fonepad’s features performed on par with the main competing tablets in its class. The physical design of the Fonepad isn’t as classy as the iPad mini or as comfortable as the Nexus 7. Its user interface should have just been the stock ‘Nexus experience’, for best results. The included camera is not up to par with modern smartphone/tablet cameras, and while its battery life is solid, that’s basically expected from modern tablets.

Conclusion
The Fonepad is a very decent little Android tablet. It’s pretty much almost a replica of the first Nexus 7, with a few minor improvements. Given that we waxed lyrical about how much we loved the first Nexus 7, it’d be hypocritical not to hand over a dose of similar praise to the Fonepad. This is a great little tablet which we really enjoyed using, and we think almost anyone would also really enjoy it. It’s a great device and easily in the top echelon of mid-size tablets.

However, it’s impossible to ignore the fact that the Fonepad has launched in Australia almost a year after the first Nexus 7 did, and yet its price has not been significantly cut (the 8GB model starts from $329). In the meantime, Google has moved on and now has a new Nexus 7 in the market. Samsung has its strong Galaxy Tab 3 line in market, and we’re also expecting Apple to come out with a new iPad mini later this year.

What this all ads up to is the inescapable conclusion that anyone looking for an Android tablet in Australia right now just shouldn’t buy a Fonepad. If you’re interested in an iPad, there’s really no doubt that you should hang on a few months to see what Apple comes up with in terms of the new hotness, and if you’re interested in an Android tablet, we’d recommend you look at competing options from Samsung or Google, both of which have updated specifications compared to the Fonepad, for around the same price or even a little cheaper in places.

To be honest, we find it hard to understand why ASUS would bother launching the Fonepad in Australia when it did (the tablet hit locally in May). The company must have been aware, as its manufacturer, that Google’s new Nexus 7 was about to launch in Australia, and it should also have been aware that Samsung was about to enter the market with a new bunch of Galaxy Tabs. These are huge efforts, and ones that eclipse ASUS’ own. It’s hard to divine ASUS’ strategy here, but either way, we find it hard to recommend anyone buy the Fonepad right now, when its featureset is already dated. If the Fonepad came down to between $149 and $199, we could see people being interested in it. Until then, it will likely remain an also-ran.

Other reviews of the Fonepad we liked: Good Gear Guide, Techradar.