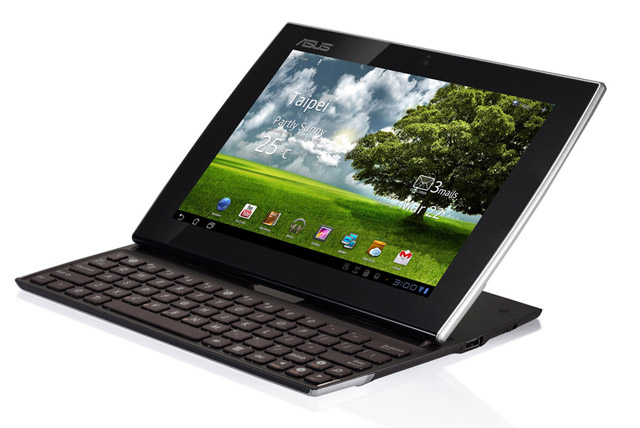 review You know what bores us to tears? “New” Android tablets that look almost exactly like the old ones. Enough already! Thankfully, this has never been a problem with Asus tablets, and the Eee Pad Slider follows on from the successful Eee Pad Transformer by offering something a little different.

It’s the first post-iPad tablet we’ve seen that has a built-in keyboard, letting you move from touching to typing just by pushing the screen up. It’s a cool trick that sets the Eee Pad Slider apart from the crowd of 10″ tablets, but does it add enough utility to make the extra bulk worthwhile? Read on to find out.

Design
Asus seems to have settled on brown as its colour of choice for tablets. The Eee Pad Slider has a chocolate brown rear and keyboard, similar to the hue found on the Eee Pad Transformer (but without the metallic sheen), with silver highlights and a glossy black bezel, all of which amounts to quite a stylish appearance.

The five-row keyboard slides out from behind, pushing the screen up at a fixed 45-degree angle. The layout is cramped, as you’d expect, but we were able to build up a decent touch-typing speed with practice. The keyboard does a remarkably good job at balancing out the weight of the screen (unlike the Eee Pad Transformer, which was top-heavy), letting you use the Eee Pad Slider in a variety of positions without it tipping over – a versatility that’s helped along by the IPS display technology that offers 178-degree viewing angles.

Naturally, the built-in keyboard adds extra thickness and weight to the package. The Eee Pad Slider weighs in at a hefty 960g, which is almost as heavy as a netbook or ultraportable laptop, and the 17.3mm thickness is more than twice that of the iPad 2. The extra weight makes a difference when you’re using the Eee Pad Slider in slate form – holding it with one hand for longer than a few minutes isn’t really sustainable.

At least the thicker profile allows room for more interfaces, all of which are located on the keyboard half. There’s a microSD slot on the left next to the reset, volume and power buttons, a full-sized USB port and headphone jack on the right, and a mini-HDMI port and the proprietary charge/sync connector.

Features
It may have a different form factor, but the Eee Pad Slider is functionally identical to Asus’ first Android tablet, the Eee Pad Transformer, in almost every regard. Both have a 10.1″ LED-backlit 1280 x 800 touchscreen with Gorilla Glass and IPS, a 1GHz Nvidia Tegra 2 processor with 1GB of RAM, 16GB or 32GB of flash storage, 802.11n Wi-Fi and front and rear cameras. The only real difference is battery life, with the Transformer lasting an hour and a half longer at 9.5 hours – and this is without the keyboard dock attached, which boosts the Transformers total to an impressive 16 hours altogether.

The Eee Pad Slider runs Android 3.1 out of the box, but a system update brings this up to the latest 3.2.1 version. Asus has put a lot of effort into making its tablet experience unique, and it does improve Honeycomb’s otherwise homely appearance. Asus’ ‘WaveShare UI’ brings attractive custom layouts and widgets to the homescreen, along with skinned buttons on the bottom bar, and there are preloaded apps for DLNA streaming, cloud storage (it comes with one year of unlimited storage through Asus) and document editing.

With the Transformer, Asus consistently outdid its rivals at providing swift over-the-air software updates, and we’re expecting the same level of support for the Slider. Considering this seems to be a pain point with every other Android tablet, it’s a big tick in Asus’ favour. Asus has already announced that it will be providing updates to the Android 4.0 operating system (nicknamed ‘Ice Cream Sandwich’) for both the Transformer and the Slider.

Performance
There’s a small lag when switching between apps and opening messages in the Gmail app, but for everything else, the Eee Pad Slider is quite snappy.

The browsing experience could do with a bit of improvement, though. With our usual ‘real-world’ browser test of loading the SMH website, the Eee Pad Slider completely rendered the page in 15.5 seconds, versus 9 seconds on the iPad 2. The long time gap seems to be down to the manner in which the Slider loads webpages, caching most of it in the background before it presents the page. The iPad – and most other browsers – loads the page top-down, letting you start browsing almost instantly. Panning through the page is quick once the page has fully loaded, but pinching to zoom in and out of the page isn’t very smooth. The Android browser also loads the mobile versions of websites (where available) rather than the desktop layout, and there’s no easy way to force it to display desktop formatting by default.

The Eee Pad Slider is great for viewing photos on thanks to the screen’s bright LED backlighting and vibrant colours. Alas, that’s about the limit of the Eee Pad’s multimedia prowess. Don’t be fooled by the impressive-looking grill on the tablet’s front lip – the stereo speakers are actually behind the screen and are woefully underpowered. At maximum volume, it was the equivalent of 50% volume on the iPhone 4S, and pretty tinny besides. Video playback isn’t much better. Asus has hidden the video player away in the Gallery app, and it doesn’t support the usual DivX, XviD or MKV formats. This isn’t a huge drama, as there are at least a dozen free video players available in the Android Market app store, but you’ll need to pay for one that supports the 720p video hardware acceleration that’s supported by the Tegra 2 chip – and 1080p playback isn’t possible.

The Eee Pad Slider isn’t particularly strong when it comes to battery life. The eight-hour run-time quoted by Asus was closer to 6.5 hours in practice (doing a mix of web browsing and word processing), and this falls well short of the iPad 2’s camel-like endurance, not to mention the Eee Pad Transformer’s 16 hours.

Conclusion
We like the idea of the Eee Pad Slider, and we applaud Asus’ efforts at continuing to push the Android tablet envelope. But it’s just too heavy for its own good. If Asus had managed to make it just as light (if not necessarily as slight) as other 10″ tablets, we could see it becoming just as popular as the Transformer. But at 960g, it’s lost the weight advantage that most tablets have, and we’re struggling to find a type of user that would prefer the Slider over other tablets.

If you’re going to be using the keyboard regularly, why not just pay less and get a netbook, or pay a little more and get a MacBook Air – both of which offer a superior typing experience? If you’re only going to be using the keyboard occasionally, then the Transformer offers a better solution, as you can take the (superior) keyboard off when you don’t need it, giving you a much lighter 680g package for everyday use that offers better battery life than the Slider.

Those misgivings aside, it’s still an impressive tablet, and the flexibility of the built-in keyboard and full-sized USB port makes it a highly capable mobile workstation. It just needs shed some weight before we can recommend it. The Eee Pad Slider is available from JB Hi-Fi, Harvey Norman and Bing Lee: $649 for the 16GB version and $749 for the 32GB version.