news Australia’s average Internet speeds have decreased by 23% compared with a year ago, according to the latest quarterly figures from global content distribution network (CDN) giant Akamai.

The company’s Q4 2012 State of the Internet report (available for download here, or read the executive summary here), compiled from a significant volume of usage data based on the company’s delivery of streaming and static content around the world, put Australia well behind advanced Asian countries, the United States and UK in key metrics.

Interestingly, average peak connections in Australia were 23.4Mbps in 2012 – down 28% compared with 2011 – which hit Australia’s fast broadband ranking. Australia and South Korea were the only Asia-Pacific countries to see high broadband adoption rates decline year over year – by 56% and 13% respectively – compared with the same period in 2011. 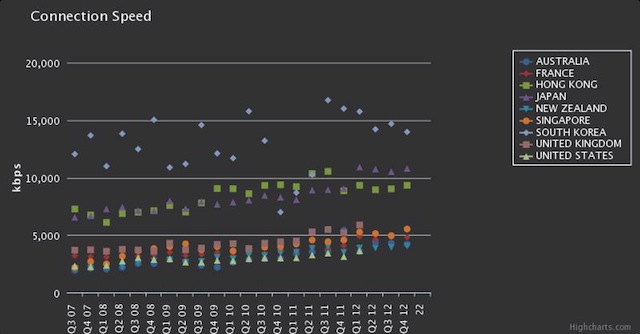 The results must be taken with a grain of salt, since they only reflect usage on Akamai’s network: therefore, the loss of a major Australian video-streaming client, for example, might skew results towards lower-speed broadband. Akamai says that it recorded nearly 700 million unique IP addresses from 240 regions during the quarter – representing a 10% increase over 4Q2011.