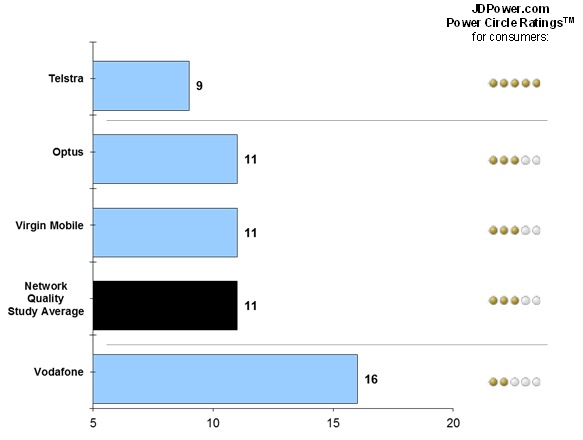 While few will be surprised that Telstra’s network came up tops in the survey, more encouraging for the industry as a whole was a strong reduction in overall problem levels during 2012, with an average of 7 PP100 this year compared with 11 PP100 overall in last year’s survey. Data transfers were easier on 4G networks (17 PP100) than 3G networks (21 PP100), as were mobile Web-browsing slowdowns (16 PP100 vs 20 PP100); little wonder that 3G customers were far less likely to switch carriers within the next 12 months.

Here’s what Kirk Parsons, senior director of wireless services at J.D. Power, had to say about the results:

It’s very interesting to see the stark performance differences between the newest generation of network technology, 4G, and other network services that were the first offerings of high-speed data centric devices baed on 3G marketed devices in 2011. With the network advantages of using 4G technology, in terms of spectrum efficiencies and increases in data connection speeds and reliability, it’s not unexpected that wireless carriers are rushing to expand and upgrade their networks to align with this latest generation of service.

The full survey is available here for your reading pleasure, and may elicit some head-shaking from those who are seeing much different results from their own mobile wireless services. How has your 4G performance been going, particularly with relation to your 3G experience?