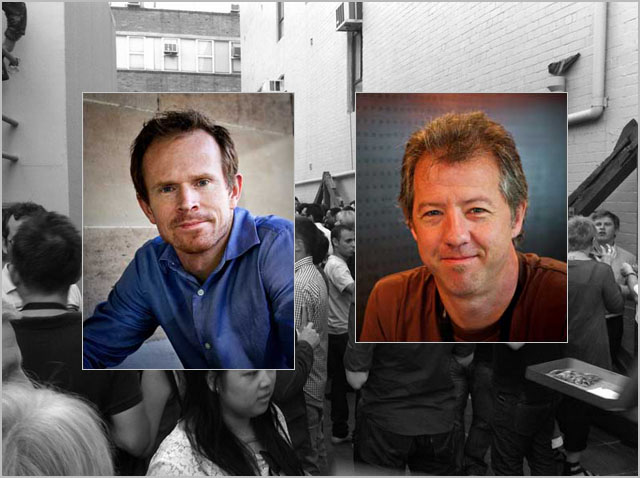 news Australian startup incubator Pollenizer has raised a further $1.1 million to continue to develop its operations, and has substantially reformed its model on building startups to place a higher emphasis on its staff acting as co-founders of the startup companies it helps to foster.

The company, formed by local technology startup luminaries Mick Liubinskas (pictured, top-left) and Phil Morle (pictured, top-right) in 2008, focuses on working with budding technology startup entrepreneurs to help them develop new business models. It has historically provided its own staff and some startup capital in a co-investment model to aid local entrepreneurs, as well as connecting startup builders with angel investors and venture capital funds and conducting networking and educational events to support the local IT startup sector.

Not all of the company’s ventures have succeeded, however; the company’s Friendorse startup shut down in mid-July after its model of supplying community recommendations for businesses and services failed despite the involvement of major media group APN News & Media; and Mumbrella reported this week that even Pollenizer’s most high-profile success, group-buying site Spreets, which was sold to Yahoo7! in January 2011 for $40 million, had exited the group buying market and would effectively become an email mailing list broker.

In a post on the company’s blog last week building on an earlier thoughtful post about Pollenizer and the nature of startups, Morle said one of Pollenizer’s recent learnings had been that “agencies can’t build startups”. Building a startup required “the fires of fear, passion and obsession”, he wrote, and “this takes a founder and not an employee”.

Consequently, Morle noted that Pollenizer teams will now work directly for the startup companies it supports as co-founders and not Pollenizer employees. “They will be supported by our infrastructure, training, tools and support services,” he added. “They will be real owners of the business with real control. There will be enough capital for a 9 month, real run at traction for a team including sales, product management and engineering functions + shared resources from Pollenizer such as design and startup operations support.”

“On first glance, investors look at this and think “Half of the company in an [employee stock ownership plan/ESOP] pool? That’s crazy!” but remember that there is nothing there except potential at this moment,” wrote Morle. “Not one line of code and a business model that is not validated. The people that will make this a reality need to be aligned with the capital investors need for this to succeed. And it’s not ESOP (Employee Share Option Plan) because these are not employees. These are founders. They get founders equity. Founders look at this and say “I need to GIVE AWAY 50% of the company?!” but there are investors and support networks backing them to the tune of hundreds of thousands of dollars and the team hasn’t started yet. There are people backing them with the riskiest money they will ever invest.”

Morle said the new model had been received well by investors and co-founders and Pollenizer had already started a new business using it. “As always, we provide a way for investors to partner with us to co-found disruptive new businesses and now we also have a model which allows a new generation of entrepreneur to participate. Everyone is aligned to make the business work over the long haul,” he wrote. “And it is – always – a long haul.”

News of the new model comes as Pollenizer also this week disclosed that it had taken a further $1.1 million in investment capital to keep its own operations afloat. According to a statement issued by the company, the capital raising came from a diverse group of investors in Australia, Singapore and the USA. These included Brook Adcock, founder of Pandora Australia, Neil Miller, veteran technology investor and early investor in Seek as well as Greg Roebuck, CEO of Carsales.com.au.

The investment capital will be used to launch further startups technology companies, fund the growth of existing portfolio of companies and to support the expansion of Pollenizer’s activities in South East Asia. “The Pollenizer team are veterans with world class experience in startups. The Australian startup technology industry is going from strength to strength and Pollenizer is leading the way,” said Roebuck. Pollenizer said it has been operating for five years, has launched 20 startups, raised $12 million and created successful businesses like Spreets, Mogeneration, Dealised, Wooboard and Pygg.

It’s not the first time Pollenizer has gone through a similar capital raising process. In November 2011, for example, the company raised another $1.1 million, and it also raised $500,000 in December 2010.

opinion/analysis
I’ve only got two things to say about the Pollenizer goings-on chronicled in this article.

Firstly, Morle’s right — it was time for a shake-up of the Pollenizer model. The incubator/consultancy (the precise definition of what exactly Pollenizer can be classified as is an going matter of debate) hasn’t had a square ‘hit’ for a while after the Spreets deal, and it’s had enough failures now for it to be worth taking another look at it’s model. In fact, I’m pretty sure Pollenizer’s team debates its model pretty much every day; but still, it’s nice to see some formality around this kind of change.

This is a very good thing. The team at Pollenizer has always been one of the most innovative and forward-thinking in Australia’s technology sector, and its influence is felt far beyond its own walls and portfolio companies. Where Pollenizer leads, other groups will follow, and I really like seeing the company evolve in this way. I also like the new model on its own merits; it smacks of aligning the company’s staff further with the businesses they work on, which is always a very good thing.

Secondly, and this is a minor note, I do wonder what the equity break-up of Pollenizer itself at this point. I suspect it would have to be getting quite diluted; the company has now gone through several capital-raising rounds, each time with a decent list of local investors. Some of that may have been for its seed funding activities, which may not technically be a part of its own financial operations; but the fact remains that there are now quite a few people (perhaps most of the key angel investors in early stage tech companies in Australia?) who have a direct stake in the success of Pollenizer and its portfolio companies.

With this in mind, I would be fascinated to know how Morle and Liubinskas are making out personally, this far down the track (five years after Pollenizer was founded). Both have been around the block quite a few times now with the startup train and are probably getting a little bit drained at this point; it’ll be interesting to see what their ongoing role in the company will be going forward and just how much financial benefit they have gotten from it. They’re so much more engaged in the portfolio companies they assist than your typical seed, angel or VC investors would be; one hope they are reaping just compensation for contributing so much of their energy to so many people’s startup journeys.