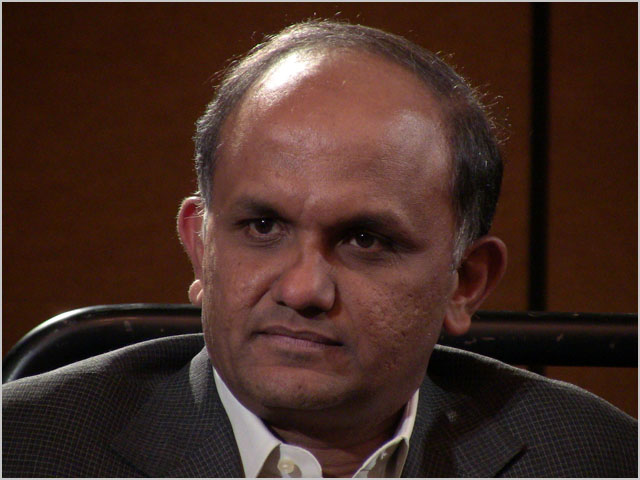 news The chief executive of global software vendor Adobe, Shantanu Narayen, has refused to directly address questions regarding price markups that can see Australians pay up to $1,400 more than US residents for the company’s software, in a press conference in Sydney this morning which at times threatened to descend into a farce.

Narayen was in Sydney this morning to attend the official opening of Adobe’s new local offices in Sydney’s central business district, at an event attended by Communications Minister Stephen Conroy and NSW Premier Barry O’Farrell. However, the event was overshadowed by the news this week that the company, alongside Apple and Microsoft, had been legally summoned to attend hearings held by Federal Parliament into the high local prices charged by a number of technology vendors in Australia. Adobe has previously declined to voluntarily give testimony at the hearings.

Adobe has long marked up its products for the Australian market. For example, in April 2012, it revealed that locals would pay up to $1,400 more for the exact same software when they buy the new version 6 of its Creative Suite platform compared to residents of the United States, meaning some Australian residents can afford to fly to the US to buy a US version of the software and fly back, for the same price they would pay in Australia for the software.

This morning in a brief press conference, Narayen was asked how Adobe could justify charging up to $1,400 more for the exact same software delivered in Australia, given that the software can be delivered over the Internet with no boxed retail copy involved.

However, Narayen flatly refused to directly address the question, instead repeatedly emphasising that the company saw the future of its products as being its leased version of Creative Suite, termed Creative Cloud, rather than the traditional Creative Suite software which still makes up the vast majority of its revenues. Adobe harmonised the Australian pricing of some versions of Creative Cloud with its US pricing this week.

When it was pointed out to the executive that most customers still preferred to buy the traditional Creative Suite software from Adobe, Narayen replied:

“I think the message that I’m trying to send all of you, is that the Creative Cloud’s the future of creative,” Narayen added, “and when you look at the value that customers, whether they be individuals, all the way to large enterprises, are getting through the Creative Cloud, we just think that’s phenomenal value for our customers.”

Narayen was further asked why Adobe didn’t feel confident reducing the price of its other products, if it felt Creative Cloud was the future for customers. He responded: “When Adobe thinks about how we want to attract the next generation, again, the future of the creative is the Creative Cloud.” Delimiter stated to the executive that he was not answering the key question of Australian pricing on the company’s Creative Suite products. “All I can say is what I think about what’s the best offer for customers, and we think about the Creative Cloud, we think we have a great offering at a great price for customers,” Narayen responded.

Narayen’s answer to the question of Australian pricing on its products was markedly different to the response the company gave in 2010, when the company revealed its Creative Suite 5 pricing, which was similarly substantially higher in Australia than it was in the US.

At the time, the company’s senior director of APAC marketing Mark Phibbs pointed out that the majority of Adobe’s software in Australia was sold through channel partners — and so the prices listed on its online store may not reflect competitive pricing in the market. In fact, the price through its own online store would reflect a price towards the upper end of the range which its channel partners were charging.

Asked what potential there was for Adobe to avoid selling through the channel and provide a more equal price direct to consumers, Phibbs said there was “some scope” for that, but stated also that many consumers wanted more of a complete package than could be bought through Adobe’s own store, which only sells its own software. In addition, at that stage Adobe stated the issue wasn’t one for the technology industry alone — claiming it was a wider problem affecting other areas such as the automotive sector as well.

Communications Minister Stephen Conroy was asked whether it was appropriate for him to attend Adobe’s office launch, given the ongoing parliamentary hearings regarding local prices of Adobe and other vendors. In response, the Senator pointed out that Adobe had cut some prices in Australia (the Creative Cloud pricing). “We welcome that,” he said. “One of the reasons I signed off on this committee hearing was that so we could get some transparency, get some debate going.”

“Don’t misunderstand; I signed off on this hearing. We’re very pleased to see some very pleasing results for Australian consumers. And we continue to say, the parliamentary committee is wanting information, wanting to know why Australians pay more. And that is a very good thing.”

opinion/analysis
I encourage you to watch the video above of Narayen ‘responding’ to the very legitimate questions which Delimiter and other media outlets put to the Adobe chief executive regarding its Australian prices. Frankly, and I think most other journalists in the room would agree, the press conference quickly descended into a farce as this global technology sector leader — in charge of one of the world’s most venerable software vendors, a company which makes many billions of dollars every year — refused to answer the most basic questions about why his company charges significantly higher prices in Australia compared to the prices set in its home country of the US.

I’ve interviewed thousands of executives over the past decade in which I’ve been a technology journalist; and this morning’s effort by Narayen would have to be one of the poorest.

You have to wonder why the executive didn’t at least attempt to make the smallest effort to placate angry Australian customers. He could have, as senior Adobe executive Mark Phibbs did in 2010, give a reasonable answer about the dynamics of the local market (also, here’s some other Adobe comments from 2010 on the matter which went further than Narayen’s). He could have apologised to customers, but said that due to Adobe’s business operations and the higher cost of selling products in the Australian market, the price needed to stay where it was. He could have simply said that the problem wasn’t one for Adobe alone and that it needed to be discussed on an industry wide basis.

However, he said none of these things. Instead, Narayen treated Adobe’s Australian customers with complete contempt, flat out stating that Adobe didn’t want Australian customers to buy Creative Suite; it wanted them to buy Creative Cloud instead. The reason why is probably obvious to many customers … if you buy Creative Suite, you pay Adobe once and can use the same software for years — products like Photoshop don’t go out of date that quickly and remain functional years after you bought them. However, if you sign up for Creative Cloud, you’ll be paying Adobe, month in, month out, year in, year out, to use the same software forever, on a subscription basis. And you won’t own the software at the end of that point.

Listening to Narayen today, I was reminded of a comment Apple founder Steve Jobs made that was published in his recent biography.

At the time, 1999, Adobe had declined to support the Mac by bringing its video editing software to the platform. Adobe founder John Warnock had retired before that. Jobs’ comment was: “The soul of Adobe disappeared when Warnock left. He was the inventor, the person I related to. It’s been a bunch of suits since then, and the company has turned out crap.” Watch the video above. And tell me you don’t agree.