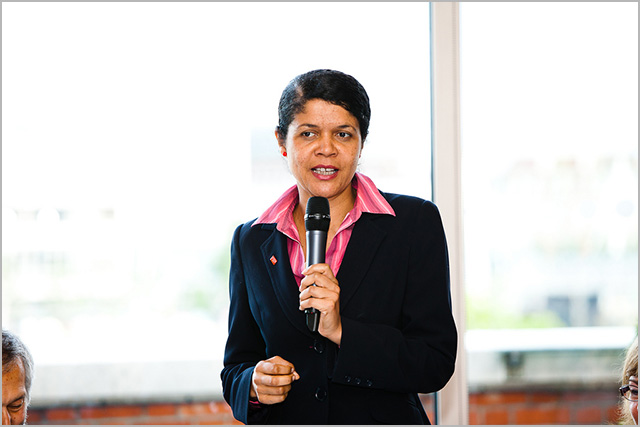 news One of the UK Government’s up and coming technology-focused politicians, Chi Onwurah, has declared Australia’s National Broadband Network to be bold and visionary following a visit Down Under and asked her own country’s administration why it doesn’t have similar ambitions in its own, much more limited broadband policy.

Onwurah is a member of the British Labour Party, roughly analogous to Australia’s own Labor Party, and was elected as a member of the country’s parliament in the May 2010 elections for the seat of Newcastle Upon Tyne Central. However, the MP isn’t the normal run of the mill politician. Before winning her seat, Onwurah was head of Telecoms Technology at the country’s telecommunications regulator Ofcom, where she focused on the broadband market.

Onwurah also has a highly technical background, boasting a degree in Electrical Engineering from London’s Imperial College. According to her LinkedIn profile, the politician spent six years at Ofcom. Prior to that she worked in a variety of senior and project management roles for technology-related companies such as Teligent, Cable and Wireless and Nortel, as well as a stint at telecommunications and financial advisory firm Hammatan. In her new parliamentary role Onwurah has been active in a variety of areas, but especially in the business, innovation and skills portfolio. Onwurah was recently asked to take up a shadow ministerial role in Labour’s Cabinet Office team.

In an opinionated article published by the UK branch of technology publication Computerworld last week (we recommend you click here for the full article), Onwurah noted that she had taken the opportunity of a social visit to Australia over Christmas to also meet with Communications Minister Stephen Conroy and NBN Co chief executive Mike Quigley, to get an update on the progress of Australia’s NBN project, which the MP is familiar with courtesy of her time at Ofcom and an earlier visit to Australia in early 2009 – just before the current NBN project was announced in April that year.

In her article, Onwurah noted that the NBN was delivering on its aims and questioned why the UK could not deliver a similarly ambitious agenda of improving fundamental broadband service delivery. “Clearly the UK is not in a position to make the kind of investment NBN Co represents. Autralia’s banks did not require a massive bailout and their economy has not suffered a double dip recession … But what the UK should be able to deliver is a vision of our communications future,” Onwurah wrote.

Unlike in Australia, in the UK the country’s Labour party is in opposition, with the country currently being governed by a coalition of the Conservative and Liberal Democrat parties.

Currently, the UK Government does have a target of providing superfast broadband, defined as 24Mbps, to at least 90 percent of premises in the country by 2015, and to provide universal access to “standard” broadband with a speed of at least 2Mbps by 2015. However, unlike in Australia, which is constructing its own Government-owned National Broadband Network, the UK model is progressing via a subsidy approach which is seeing the Government fund specific areas of infrastructure rollout in coalition with the private sector.

Although there are other projects, the telecommunications rollout which most of the country’s residents are pinning their hopes on is the deployment by UK incumbent telco BT of fibre to the node technology, which is slated to bring 80Mbps speeds to most of the country.

Most of the UK will receive BT’s FTTN rollout, which has so far reached ten million premises across the country and is slated to pass approximately two thirds of UK premises by the end of 2014. However, the telco has also deployed FTTP in 15 telephone exchange areas to date and is also exploring the option of deploying the service to multi-dwelling units such as apartment blocks, where the fibre can support multiple connections. The upgraded FTTP service will speeds of up to 330Mbps.

In Australia, Shadow Communications Minister Malcolm Turnbull has cited BT’s FTTN rollout as an example of how upgraded broadband could be deployed in Australia.

However, as in Australia, the UK also has an ongoing debate about how broadband technology should be deployed in the country. In a report produced by the House of Lord’s Select Committee on Communications (PDF here) in August 2012, the House of Lords called for the country to implement a model technically more like Australia’s, with fibre extended as far as possible everywhere and open access networks.

As for a wider analysis of her opinion piece; well, it’s fairly obvious what her motivations here are. The ruling UK Tory/Lib Democrat coalition is taking a very minimalist approach to broadband policy in the country; something which has not failed to attract the attention of the at-times rambunctious and quite independent House of Lords. If you don’t know much about the UK parliamentary system, by the way, don’t think that the House of Lords is like Australia’s Senate. It’s not – members are not popularly elected, and the House of Lords doesn’t have quite the power that the Senate does in Australia, although it still acts as a very important and often quite apolitical house of review in the UK.

In commenting on the minimalist broadband policy of the current ruling coalition, Onwurah is not only on her home ground; she’s playing the populist card. She’s right: Australia’s NBN policy is visionary by international standards and most indications show that it is on the way to delivering on its aims. It represents a very useful card for Onwurah to inject into the domestic political debate on broadband in the UK, and I’m sure her fellow labor movement compatriot, Communications Minister Stephen Conroy, was more than happy to facilitate Onwurah’s move to do so.

I only wonder why Onwurah isn’t pushing her argument more strongly. Her overall opinion piece last week was quite moderate and sensible; she didn’t really attack the UK Government’s current broadband policy too strongly. If she had been an Australian politician, she would have brought out the fire and brimstone and damned the ruling Tory/Lib Democrat coalition to hell. Perhaps the UK’s political debate is more polite on the broadband scene than it is in Australia? Let’s hope that 2013 will see some of that more gentle argument make its way down under.