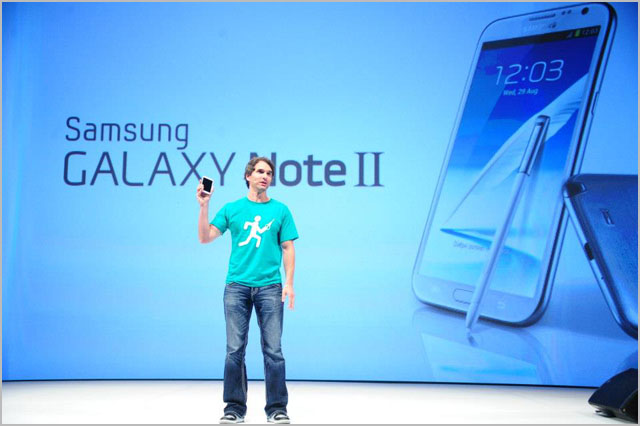 blog Want a larger version of Samsung’s Galaxy S III handset? With a stylus and decent handwriting recognition? And 4G speeds to boot? You’re in luck. Korean electronics giant Samsung announced last night at a Sydney event packed with … well, hype and B-grade celebrities … that its Note II smartphone will be coming down under next week, with all of Australia’s major mobile carriers stocking it and support for the 4G networks of Telstra and Optus (as well as Vodafone, when it launches one). We weren’t there last night and Samsung hasn’t said much this morning, but luckily PCWorld Australia has the skinny (we recommend you click here for the full article):

“Samsung will launch its hotly anticipated Galaxy Note II Android phone in Australia “next week” through Telstra, Optus and Vodafone, but no contract pricing or plan details have been revealed yet.”

You can check out Delimiter’s preview of the Note II here; hopefully we’ll get access to a review unit for a full review shortly. Our preview stated:

“We really, really liked the Galaxy S III, rating it one of the best handsets, if not the best, available in Australia at the moment. With the Galaxy Note II, Samsung looks to have up-sized this stellar model into the ‘phablet’ zone, adding a stylus and what is rumoured to be strong handwriting recognition to boot. If the battery is strong and the handwriting recognition is as good as people are saying it is – and if the Galaxy Note II supports 4G speeds in Australia – then we reckon Samsung is onto a winner here with certain segments of the population. Not everyone will like this form factor – and it’s not the best for actually making calls. But for those who like this kind of smartphone model, we think this is likely to be one of the best examples of the breed.”

Postscript: Yes, that is Todd Sampson in the photo above from last night.