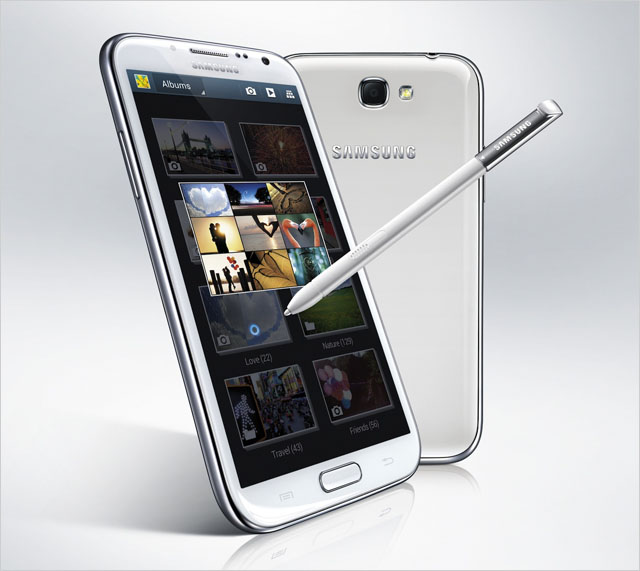 preview Samsung’s latest attempt to merge stylus computing with a smartphone comes across as a marriage between the original Galaxy Note and its extremely popular Galaxy S III. But does this ‘phablet’ device bridge the gap between phone and tablet well, or is it a misshapen monstrosity? Read on to find out.

Design
The weird thing about the Galaxy Note II is that you can’t help but feel as though you’ve seen it before somewhere, but slimmer. It’s as though that attractive person from your office went on holiday for a while and let their fitness go, coming back slightly out of shape and with a little pudge. It’s a little weird, but you still like the way it looks overall, right?

And, to be honest, this is a really good thing. We wrote about the original Galaxy S III:

“Two things are immediately apparent with respect to the Galaxy S III’s design aesthetic when you pick it up. Firstly, this is a phone which absolutely screams “build quality”. Every single edge has been polished and smoothed, every component is integrated perfectly into its neighbour, and overall you just feel like you’re holding something special. Amongst smartphone manufacturers, we’ve really only seen a couple that are able to achieve this level of design; Apple being the most noteworthy, alongside Nokia and perhaps HTC. This is the goods when it comes to smartphone build quality, and when your friends and family pick up your Galaxy S III they’ll notice it’s something special.

Secondly, there is the screen. At 4.8″, the GS3′s screen is one of the largest on the market, although not quite as large as the jumbo 5.3″ model on its sister phone, the Galaxy Note. If you hold the GS3 next to almost any other recently popular smartphone (for example, the iPhone 4S or HTC Sensation), you’ll notice just how large the GS3′s screen is. This is also emphasised by the fact that there isn’t a lot of wasted space around the screen. On the front of the GS3, almost all of the space is taken up by the screen, with everything else being a secondary concern. Buttons? Why do we need buttons? We’ve got a huge whopping beautiful touchscreen!”

The other major design difference between the Galaxy S III and the Galaxy Note II is the included stylus pen, which one of the Galaxy Note II’s major drawcards. We’re not a huge fan of using a stylus for any device (the iPhone spoiled that for us), but we have spoken to quite a few people who find this kind of input indispensible, including quite a few smartphone buyers from Australia’s Asian business community, medical professionals, artists and so on. Steve Jobs might not believe in styluses, but there are certainly people out there who do.

On the Galaxy Note II, the included stylus (or, as Samsung would have us call it, the ‘S-pen’), slots into a little hole on the bottom right of the smartphone when it’s not being used.

Features
As with its design, the Galaxy Note II contains many of the same specifications as the Galaxy S III, but with some notable additions and improvements. For starters, it features an upgraded 1.6GHz quad-core processor (it’s Samsung’s Exynos model). And unlike the original Galaxy S III, it also supports the LTE standard for access to 4G mobile networks. We don’t yet know whether the Galaxy Note II will support the 1800Mhz spectrum used by Telstra and Optus in Australia for their mobile networks, but given that the 4G version of the Galaxy S III does, it seems a safe bet.

The Galaxy Note II comes in three models with different amounts of internal storage – 16GB, 32GB and 64GB – and like the Galaxy S III, it comes with a microSD card, which can take up to 64GB of additional storage. Its front camera is a 1.9 megapixel model – a more than decent rating for a front-facing smartphone camera – and its rear model is an eight megapixel model, which looks to be the same one that’s in the Galaxy S III. The back camera is also capable of shooting video at 1080p. 2GB of RAM is included.

Two other upgrades to the Galaxy Note II will be of prime importance. Firstly, it has a whopping battery, at 3100mAh, and it’s removable. Despite the larger size of the Note II’s screen, and the fact that it supports 4G speeds (both of which are battery suckers), we can’t help but feel that it’s likely that this is one smartphone which will have decent battery performance.

Secondly, the Galaxy Note II will come with version 4.1 (Jelly Bean) of Google’s Android operating system. This is very much a good thing. Jelly Bean, with its Project Butter smoothness, represents a real landmark in Google’s development of Android, and we highly recommend adopting it if your smartphone supports it. It’s just so much more polished and developed than the previous version – Ice Cream Sandwich – and we are very much in love with it.

Apart from this, one other notable feature is the software integration of the Galaxy Note II’s S Pen stylus. One of the big features in this smartphone is the integration of handwriting recognition. And there are a bunch of little niceties associated with this integration – such as a function called Air View, which lets you use the pen without actually touching it to the Galaxy Note II’s screen – you can simply hover it close over it, and it’ll register.

Conclusion
We really, really liked the Galaxy S III, rating it one of the best handsets, if not the best, available in Australia at the moment. With the Galaxy Note II, Samsung looks to have up-sized this stellar model into the ‘phablet’ zone, adding a stylus and what is rumoured to be strong handwriting recognition to boot. If the battery is strong and the handwriting recognition is as good as people are saying it is – and if the Galaxy Note II supports 4G speeds in Australia – then we reckon Samsung is onto a winner here with certain segments of the population. Not everyone will like this form factor – and it’s not the best for actually making calls. But for those who like this kind of smartphone model, we think this is likely to be one of the best examples of the breed.