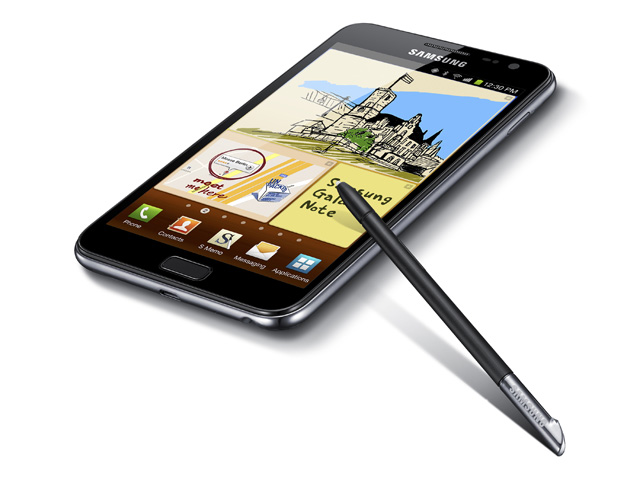 news Samsung launched its Galaxy Note Android handset in Australia on Tuesday. The device, which the company claims is a product category of its own, is described as having the benefits of a tablet while maintaining the functionality of a smartphone.

It comes with a 5.3” high resolution screen and a stylus called ‘S Pen’ that allows users to sketch, take notes, and annotate on various file formats and over PDF files. “The Samsung GALAXY Note represents a new category of Samsung portable devices for Australian consumers,” said Tyler McGee, Vice President of Telecommunications, Samsung Electronics Australia. “The product combines the freedom of a paper notebook with the connectivity of Samsung’s smartphone technology and services, providing consumers with great flexibility all-round.”

Powered by a dual-core, 1.4 GHz processor, the Galaxy Note comes with 16GB of internal memory and a microSD card slot for extra memory. Apart from the main 8 megapixel camera in the rear, there is also a 2 megapixel front-facing camera for video calls. The phone runs the 2.3 Gingerbread version of the Android operating system and has a 2500 mAh battery.

According to a Samsung media release, the Galaxy Note’s display provides excellent clarity and the large screen would allow users to view multiple pages with minimum scrolling. It claims that at 9.65mm thickness, the handset offers good portability. The device features a new category menu under Samsung Apps with applications specially designed for its stylus.

The Samsung release asserts that the device makes for easy creativity. “The incorporated digital S Pen can be used for sketching and artwork, while sophisticated handwriting recognition helps users to freely capture ideas and share them with other compatible devices with minimal need to perform any additional digitisation; handwritten text is converted into digital characters.”

“S Memo is a multimedia application designed to record various forms of user-created content. Pictures, voice recordings, typed text, handwritten notes or drawings can be captured via a single application and converted to a ‘memo’, to be edited, annotated and shared as desired. A one-step screen-capture function also allows users to instantly capture a screen. Captured images can also be freely annotated using the S Pen before being filed or shared.”

“The S Pen functionality has been deeply integrated into the GALAXY Note’s native applications to provide a rich interactive experience. Users will experience control when editing or personalising captured videos or photographs. Furthermore, users will be able to draw and send handwritten images and notes via text message, email and Samsung’s Chat ON communication service.”

The Galaxy Note will be available in stores for $899 outright and will also be sold through all three telcos. While Optus and Vodafone are expected to begin selling the device this week, Telstra’s launch is slated for sometime next month. Optus will sell the phone for $0 upfront on its $79 cap plan over 24 months with two months free access and $5 upfront for its $59 cap plan. Its timeless plans come at $0 upfront on its $129 cap plan and $99 cap plan, both with two months free access fee. Visit the Optus website for more details on plans and prices.

“The Galaxy Note isn’t a device for everyone. Its large proportions will turn most people off from using it as a phone, and those that specifically want the larger screen size of a tablet aren’t likely to be satisfied with the Note’s “smaller” display. But we do think that there’s a magical in-between type of user that just wants the one device that can do both, and the Galaxy Note fits that niche splendidly.

It’s a good-looking device with a gorgeous screen, good performance, and battery life that’s just as good as any other high-end smartphone. The stylus input we could live without (although there are some people that will find this feature appealing) – ultimately, it’s the larger screen size with tablet-like display resolution that makes the Note such a compelling device.”