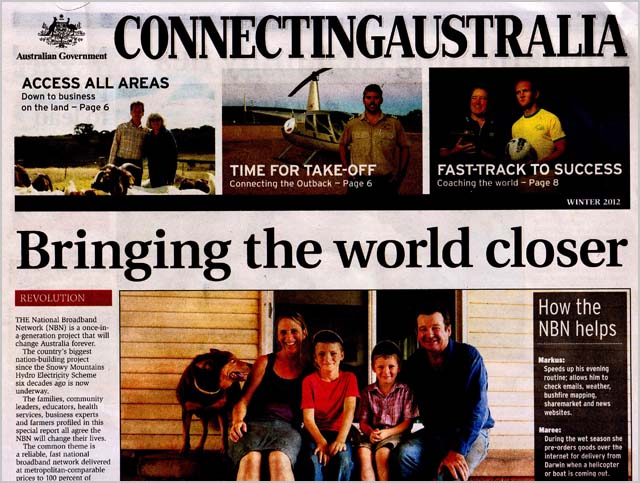 news Stephen Conroy’s broadband department has created its own tabloid-style print newspaper, which will be distributed to Australian residences and businesses in an effort to continue educating local communities about the benefit of the Federal Government’s flagship National Broadband Network project.

Dubbed ‘Connecting Australia’, the newspaper has been produced by the Department of Broadband, Communications and the Digital Economy as part of a community information kit which the National Broadband Network Company is distributing. Delimiter believes the material will be distributed in NBN rollout zones as the network is progressively rolled out. You can download a 2.4MB zip file containing the entire newspaper here.

The publication features articles, photos and advertisements which are formatted to appear very similar to a commercial newspaper. However, the articles are all on a single topic, comprising articles about those who have adopted the NBN already and commentators detailing the benefits of the project. There are no author bylines attached to any of the articles, and the eight-page publication is marked as being produced by the “Australian Government”.

For example, the lead front-page article details what it describes as a “revolution” in telecommunications. “The National Broadband Network is a once in a generation project that will change Australia forever,” it proclaims. “The country’s biggest nation-building project since the Snowy Mountain Hydro Electricity Scheme six decades ago is now under way.”

On the front page is featured the Rathsmann family, which operates a station in the Northern Territory. The lead article quotes the various members of the family discussing how “being connected to the NBN takes some of the remoteness out of living on their Northern Territory cattle station, two hours south of Darwin”.

Other pages contain feature articles in areas such as language, sport, indigenous affairs, education and so on — mimicking the normal sections of a major newspaper. In addition, Communications Minister Stephen Conroy has a featured commentary, where he outlines his vision for an Australia which will rank much higher in the global technology scale than it currently does. In other articles, leading academics, sportspeople, businesspeople and other community figures are quotes about the benefits of the NBN. There are also several sections of the newspaper styled as advertisements, with information from NBN Co contained within. The publication is labelled as being the “Winter 2012” edition.

In general, the statements made in Connecting Australia are accurate, with only a couple of minor exceptions. However, the newspaper is almost entirely focused on positive aspects of the National Broadband Network project and does not detail any of the alternative views or continuing debate about it, which has raged on an ongoing basis since then-Telstra chief executive Sol Trujillo first proposed the idea of upgrading Australia’s copper network back in late 2005.

In a satirical video posted on his web site last night, Shadow Communications Minister Malcolm Turnbull lampooned the Connecting Australia newspaper. Turnbull’s office has obtained a copy of the NBN information kit being distributed to areas connected to the network, which contained some 350 copies of Connecting Australia. Delimiter sourced a copy from Turnbull’s office.

“Now I don’t know whether Stephen Conroy or [NBN Co CEO] Mike Quigley would pass the public interest test which they’re proposing to apply to the rest of the media,” Turnbull added. “After all, there seems a distinct lack of balance in this newspaper about the NBN. I can’t see anything in here about them missing their forecasts, or the blowout in costs, and there’s no mention of any of the criticisms which I’ve been making about it. It does seem very one-sided.”

Asked about the newspaper, a spokesperson for Conroy this morning said the Government and NBN Co had started and would continue a “comprehensive communication program”, which includes explaining the benefits and opportunities of the NBN. “This is in line with recommendations from the Joint Committee on the NBN to make Australians more aware of the NBN,” they added.

“Unlike Mr Turnbull, not everyone has an iPad. Therefore, the Government is using traditional forms of communication, such as print, TV, and radio to deliver correct information about the NBN. Instead of stunts, Mr Turnbull should come up with a broadband policy.”

However, Conroy’s office did not respond to a question about whether the characterisation of the NBN information as a newspaper was misleading to residents and businesses who would receive it.

opinion/analysis
I am somewhat torn with regard to this ‘Connecting Australia’ newspaper which Conroy’s department has started distributing around Australia in collaboration with NBN Co.

On the one hand, as I read through the entire newspaper last night, I was forced to agree with almost all of the material in it. With the exception of a couple of small, likely inadvertent errors, the articles produced in the newspaper are broadly accurate and do accurately represent the potential of the NBN project to transform Australia’s telecommunications landscape, bolstering our ‘digital economy’ along the way. Anyone reading this newspaper would be educated about the benefits of the NBN. And they are legitimate benefits which will accrue from the network — this newspaper does not lie.

However, it also remains a clear fact, as Turnbull noted, that this NBN newspaper is, baldly speaking, propaganda, in the best Soviet tradition. It very heavily pushes the Government’s point of view about the NBN, in the guise of normal editorial such as you would find in a commercial newspaper, magazine, or website. There is only one point of view being expressed in ‘Connecting Australia’, and that point of view is the Government’s; the view of the ruling Labor party. There is no dissenting view or ‘balance’ to be found here. It presents an extremely one-sided view of the project as a whole. If Connecting Australia errs, it is by ommission. Not all of the facts are here — just the ones Conroy’s department wants Australians to read.

I feel distinctly uncomfortable with the idea that the Government should be distributing its own propaganda-style newspaper to Australians, and I would vastly prefer it if Conroy’s department stuck to information pamphlets which are much more obviously government-produced material. The Government should not be attempting to cloak its education campaign in the guise of legitimate editorial material. It is misleading

You can also imagine how confusing it would get for Australians if other departments followed Conroy’s lead. Can you imagine receiving a newspaper from the Attorney-General’s Department, for example, ‘explaining’ the benefits of its data retention scheme? Or perhaps a ‘Greening Australia’ newspaper from Gillard discussing the carbon tax? That is the precedent being set by Conroy here. No. Governments already have many existing ways of communicating with constituents. Printing a Government newspaper should not be one of those ways.

There is also an incredible irony here. The NBN is a project which will dramatically enhance the ability of everyday Australians to obtain up to date information about the world through a web browser. However, Conroy’s department is educating them about this potential by printing up thousands of pages of newspaper copy on a traditional printing press and then shipping that dead tree material physically to their doorstep. I couldn’t help but laugh when I saw the huge box of NBN newspapers which Malcolm Turnbull has in his office. It’s absurd. And we don’t know how many other hundreds of such boxes (thousands?) are currently being shipped around Australia. Will this newspaper be distributed to all of the millions of residences slated to receive the NBN over the next few years? We don’t yet know.

I have no doubt that this initiative by Conroy’s office was the product of a meeting between a number of bureaucrats disconnected from the real world and an overly zealous marketing agency. But I would advise the Government against pursuing this publishing project. If it does so, writers such as myself will find the opportunity to satirise it continually to be irresistible, as Turnbull did last night.