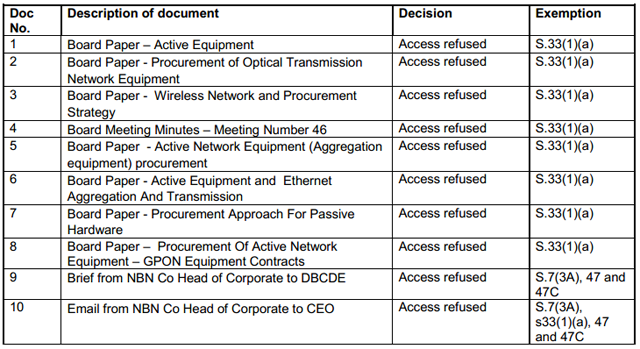 news The National Broadband Network Company, in consultation with associated Federal Government Departments have used a complex series of legal arguments, including national security grounds, to block the public Freedom of Information release of a series of documents relating to the decision to block Chinese vendor Huawei from tendering for NBN contracts.

In late March this year, Federal Attorney-General Nicola Roxon confirmed that her department had banned Huawei from participating in the multi-billion dollar National Broadband Network tendering process, despite the company not being accused of having broken any pertinent laws in Australia. Chinese diplomatic representatives and Huawei itself protested the ban strongly, but it was defended by Prime Minister Julia Gillard that same month, with the Labor leader emphasising the Australian Government’s right to make its own choice with regards to network suppliers.

Subsequently, technology media outlet ZDNet sought access to emails and memorandums within NBN Co relating to Huawei and NBN tenders. Delimiter has also filed a Freedom of Information request with NBN Co seeking any technical evaluation of Huawei’s networking equipment, although that FoI request has not been finalised yet.

Today NBN Co published its response to ZDNet’s inquiry (available online here in full). Unfortunately the news was not good. After determining that “hundreds of thousands of documents” could potentially be included in the initial dataset sought by ZDNet and successfully working with the publication to narrow the scope of its enquiry, NBN Co today said it had identified ten documents falling within its remit. However, NBN Co’s Freedom of Information office noted that it had decided to refuse access to all of those documents. ZDNet reported this story first.

Most of the cited documents consisted of papers which appeared to have been prepared for NBN Co’s board of directors, relating to the procurement approach for various pieces of equipment for the NBN — ranging from optical transmission network equipment to Ethernet aggregation and transmission equipment. Several other documents constituted board minutes, and there were several documents prepared as briefs from NBN Co’s head of corporate Kevin Brown to Stephen Conroy’s Department of Broadband, Communications and the Digital Economy, as well as to NBN Co chief executive Mike Quigley.

In its response to ZDNet’s enquiry, NBN Co wrote that most of the documents had been exempted by release because of consultation with the Attorney-General’s Department.

“After a consultation process, the AGD advised NBN Co that it objected to the release of documents 1 to 8 and relevant parts of document 10 on the basis of section 33(1)(a)(i) of the FOI Act,” the company wrote. “In particular, the AGD advised NBN Co that the disclosure of these documents could reasonably be expected to cause damage to the security of the Commonwealth.”

NBN Co also exempted the remaining documents from being released, using a number of other justifications, such as the idea that some of the documents contained information regarding NBN Co’s tendering efforts which could have adverse implications for the contracts concerned and future deals. Conroy’s Department highlighted this aspect as a concern, in its discussions regarding the FoI’d material with NBN Co.

“To date, the Government has not publicly disclosed reasons why it excluded Huawei from participating in tender bids to NBN Co,” NBN Co wrote in one section of his explanation for blocking the release of the documenbts.

It’s not the first time NBN Co has rejected a substantial FoI request in full from the public. In January, the Federal Government’s Information Commissioner supported NBN Co’s rejection of an attempt by internet service provider Internode to obtain the complete text of Telstra’s $11 billion deal with the National Broadband Network Company under Freedom of Information laws.

opinion/analysis
In general, I find NBN Co’s staff very easy to deal with. They are normally polite, up-front, transparent, honest and helpful. They have a great deal of patience when dealing with Australia’s media, which does not always show the same degree of patience when dealing with NBN Co. However, the exception to this, in my experience, has been NBN Co’s Freedom of Information division.

In the document released by ZDNet today, there is a section labelled “Application Chronology and Terms of Request”, on page two. I encourage readers to read that section of NBN Co’s response to ZDNet’s FoI request in detail. What it illustrates, in my opinion, is the general approach currently taken by NBN Co’s FoI team.

The conversation goes back and forth many times, as the two sides discuss how the FoI request will proceed. No doubt NBN Co would argue that it is helping the FoI process in this light. But in my experience, the more times you go back and forth with an FoI officer with respect to this kind of request, the more likely they are to be able to use the kind of extensive legal arguments which NBN Co used today, to block access to almost all — or, as in this case, all — of the information you are seeking. The more they refine your request, in essence, the less you will get back.

To put this into context, regular readers will be aware that I have filed a number of FoI requests over the past six months with the Federal Attorney-General’s Department, which has been very reluctant to release information about its Internet piracy and data retention initiatives. I have to say that I find NBN much more difficult to deal with when it comes to FoI than I do the Attorney-General’s Department — or, indeed, any other department I have ever dealt with on FoI.

When it comes to Freedom of Information, NBN Co is locked up very tight indeed. It will be interesting to see what the current review of NBN Co’s FoI compliance by Victorian QC Stuart Morris finds. Morris’ report should have been handed over by now to the Attorney-General’s Department.