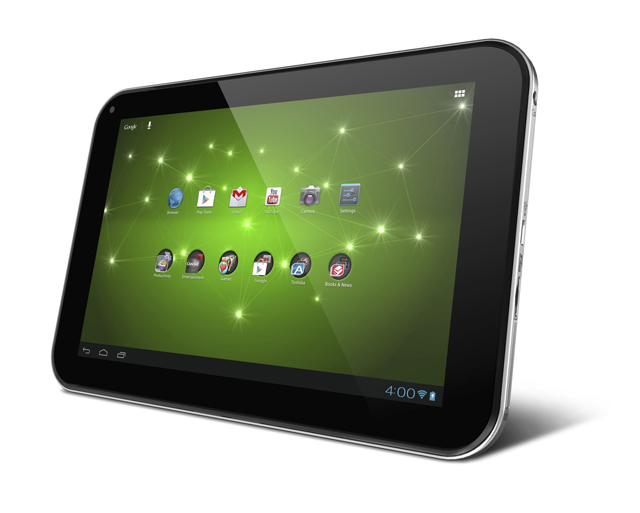 news Japanese consumer electronics manufacturer Toshiba has launched three new tablets in Australia, all running the latest version 4.0 (Ice Cream Sandwich) of Google’s Android platform and in sizes ranging from 7.7″ to a large 13.3″.

The company has over the past year or so launched quite a few Android tablet models locally, including a model which it described as the world’s thinnest and lightest tablet in January this year, and its AT100 model in June 2011. However, none are believed to have made a significant impact on the local tablet market, which remains overwhelmingly dominated by Apple’s iPad.

The first of the three new models is the AT270, a 7.7″ tablet which is 7.8mm thick and weighs 350 grams. It is powered by a NVIDIA Tegra quad-core processor and comes with 1GB of RAM, 16GB of storage space, a screen resolution of 1280×800, eight hours of battery life and a five megapixel rear and two megapixel front camera. It also comes with a micro-SD card slot and a micro-USB port. “The super slim 7.7” pocket-sized AT270 brings games, movies and photos to life in the palm of your hand, providing a vivid viewing experience on the go,” said Toshiba. The AT270 has a recommended retail price of $539.

The next model up in terms of size, the AT300, weighs 600g, and uses what Toshiba has labelled its ‘Adaptive Display’ technology that automatically adjusts brightness to suit changing lighting conditions during the day or night, leading to better picture quality. This model comes with a 10.1″ screen, the same NVIDIA CPU, 1GB of memory, 16GB of storage space, a 1280×800 resolution and the same eight hours of battery life, five megapixel rear and two megapixel front camera, micro-SD card slot and a micro-USB port. It also comes with a micro-HDMI port. It will also sell for an RRP of $539.

Like the AT300, the AT330 comes with five megapixel rear and two megapixel front camera, micro-SD card slot and a micro-USB port, as well as a micro-HDMI port. All three tablets will be available locally in late June.

opinion/analysis
In my opinion, none of these tablets will sell well in Australia. Although the devices represent a significant hardware and software upgrade compared with Toshiba’s previous line-up, in general their design appears mediocre and uninspired.

I don’t think most of the Android vendors understand yet that win significant market share in Australia, they need to either offer something better than the iPad, which is unlikely — although Amazon has given it a go content-wise with its Kindle line — or offer similar quality products at a cheaper price. Offering inferior products at the same price is not a good market strategy. Nevertheless, we’ll try to get the new Toshiba line-up into Delimiter HQ for reviews; they may surprise us yet.