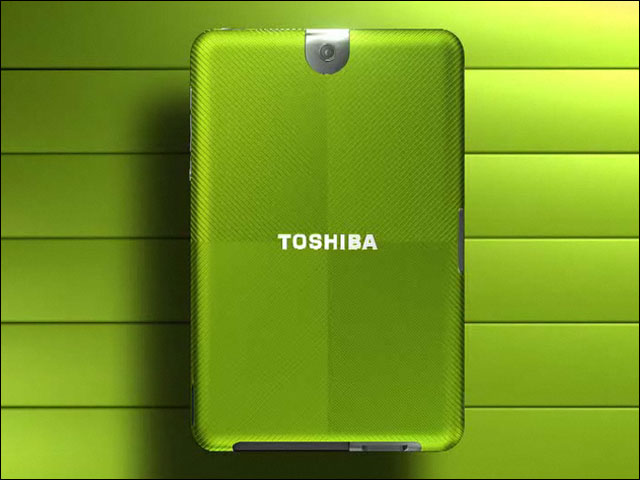 Toshiba has joined the long queue of international manufacturers launching an Android tablet in Australia, revealing late yesterday that its AT100 tablet would reach Australian shores at the end of this month.

The AT100 is powered by NVIDIA’s Tegra 2 CPU and runs version 3.0 of Google’s Android platform. It features a 10.1″ screen with a resolution of 1280×800, a HDMI out pout, an SD card slot, a removable back cover for battery replacement and a USB 2.0 slot. It also comes with a 5 megapixel rear camera and a 2 megapixel front camera, as in-built speakers and more.

However, unlike a number of other tablets on the market, the tablet does not feature in-built 3G mobile connectivity — you’ll need to tether the device to a smartphone or a 3G mobile broadband modem with Wi-Fi to get connectivity when you’re outside an area supporting Wi-Fi connectivity.

The device will sell in Australia for a recommended retail price of $579, and a range of additional options are also available — including a $29.95 cover in a wide range of colours, a six cell additional battery pack for $79.95, a $89.95 dock featuring a HDMI port, USB ports and speakers for using a keyboard or watching multimedia and even a case with a hard shell that can also function as a stand, for $49.95.

Further specifications for the tablet can be found online at a specialised web site set up for the device. It’s not immediately clear which retailers the tablet will be sold through.

The news comes as a variety of other manufacturers have recently launched similar tablets in Australia in mid-2010, with companies such as Motorola, Samsung, Acer and others all featuring devices based on Google’s Android operating system, and often through partnerships with telcos like Telstra, Optus and Vodafone.

In addition, this week Research in Motion revealed that its BlackBerry PlayBook tablet would launch through all of Australia’s major mobile carriers as well as retailer Harvey Norman from 20 June this year, and HP overnight confirmed that its TouchPad would be arriving in Australia later this year.

However, so far, the local tablet market remains dominated by Apple’s iPad, which first launched in Australia in mid-2009 and was refreshed with the company’s iPad 2 model this year.