analysis If Australians continue to buy higher-speed 100Mbps NBN services at the current rate, it is likely that the real-world consumer cost of accessing the NBN will come down substantially over time, as the network will pay for its own construction much faster than the National Broadband Network Company had been anticipating.

In the latest Senate Estimates hearing into the National Broadband Network held last week, NBN Co chief executive Mike Quigley disclosed some rather remarkable information about purchasing patterns amongst the three and a half to four thousand customers who have signed up to NBN fibre to the home plans so far.

You can see this split in this graphic below.

However, Quigley told the Senate Committee, when it came to the actual uptake experienced by NBN Co in the real world so far, this graphic had been somewhat inverted. “Overall, 38 percent of active services on our fibre network have been on the fastest speed tier, which is 100Mbps down,” he said. “Only 16 percent of the active services on our fibre network are for the entry-level speed tier of 12Mbps.” For the month of April, Quigley said, the trend was “even stronger”, with almost half of new customers signing up for the highest speed tier of 100Mbps.

Now, there has been quite widespread reporting of these statistics released by Quigley, and for good reason. What they illustrate is a remarkably different pattern of broadband usage by NBN fibre customers than previously anticipated. What has not been as widely discussed, however, is what implications this kind of changing usage pattern might have on the NBN project as a whole.

Firstly, it’s important to look at what the implications might be for NBN Co’s revenue projections. NBN Co will shortly release a new business plan, but if you examine its current plan, published in December 2010, you will find that its revenue assumptions are based on several factors.

The company’s main two sources of continuing income will clearly be the different wholesale costs it charges retail ISPs; and the two major ones are what is known as the Acces Virtual Circuit (a fixed cost per customer), and a Connectivity Virtual Circuit (which changes, depending on how much data is consumed). These two factors and other associated inputs contribute towards what NBN Co refers to as its blended average revenue per user statistic, which gives a reasonable picture of how much money the company eventually expects to make from every Australian who signs up to the NBN.

Now, the really interesting thing about NBN Co’s business plan so far is how conservative it is compared to the real-world uptake figures. The business case estimates a blended ARPU of just $33 to $34 per month over the first few years of the NBN’s life. However, this is largely based on the fact that NBN Co had been projecting that most users would take up its 12Mbps service. The following table shows the fixed monthly costs charged by NBN Co for the AVC portion of the ARPU:

What we can see from this is that NBN Co had been projecting that a large portion of the $33 to $34 ARPU projection was based on most ISPs only paying $24 per month each for the large number of NBN customers using 12Mbps speeds. In actual fact, as Quigley revealed this week, the ISPs will actually be paying NBN Co $38 per month per user in terms of their fixed AVC costs — an extra $14 per month which will significantly change the blended ARPU figure.

There is also an additional factor. NBN Co’s business case makes clear that “increasing average speeds are responsible for driving up usage, ARPU and therefore revenue”. In short, as more Australian customers take up 100Mbps speeds, it’s not just NBN Co’s fixed AVC revenue that will exceed its expectations, but also the variable CVC usage cost. In short, when you have 100Mbps speeds, you also download a lot more data than you would when you only have 12Mbps speeds.

The net effect of all this is that NBN Co’s blended ARPU figure is currently looking like it might be radically higher than the $33 to $34 monthly income NBN Co has been projecting. Could that figure go as high as $40? $50? NBN Co hasn’t given enough granularity in its projections for Delimiter to easily calculate that; but given the extreme uptake we’re seeing in early stage NBN rollout zones so far, it doesn’t seem unreasonable. And NBN Co’s overall long-term revenues could jump by tens of percentages as well, based on current trends. We’re talking billions in extra revenue here — all because Australians apparently love 100Mbps speeds.

This was a fact immediately jumped on by Greens Senator Scott Ludlam in the Senate Estimates session. “The whole premise of the business is based on the fact that nothing like those numbers of people will end up taking up your fastest package. If they do, you are running a much more lucrative business than the Minister was hoping you would,” he told Quigley.

Now, in any commercial business, it is clear that faster consumer uptake of costlier services would simply result in that business being more able to either make more profits for its shareholders, or for that profit to be reinvested in its operations. In short, there is usually no real benefit to consumers of that business from spending more with it, apart from the fact that they get better services. Occasionally in the private sector companies do take a different approach, such as the way that Coles and Woolworths have cut the prices of their basic food offerings over the past several years, as they have made substantial profits. However, usually it is the case that companies will raise their prices in the long-term, rather than cut them.

However — and this is the most interesting aspect to come out of the Senate Estimates session — this isn’t the case with the NBN.

Asked what would happen if the higher than expected uptake of 100Mbps services on the NBN were to continue, Quigley pointed out that NBN Co had a responsibility only to return a fixed amount of income to the Government to ensure a return on its investment. Beyond that point, he said, NBN Co would start cutting prices. “Because we have a fixed return, we lower prices faster,” he said. “It is the subject of ACCC discussion — this is the Special Access Undertaking. If the SAU is accepted, we can only earn 350 basis points above the long-running average government bond rate. Once we get above that, we will just decrease prices.”

OK, this has been a little complex, so let’s pause for a second and sum up the situation. For the first time, NBN Co has a reasonable sample size (three and a half to four thousand customers, including in very rural areas) on which to base its revenue projections. All indications so far have shown that those projections were incredibly conservative. If the rest of Australia takes up the NBN at the same rate as these early customers, the NBN will meet its fixed rate of return much earlier than expected, and start to cut its wholesale prices, which should result in better retail prices for customers.

There are also other reasons to believe that NBN Co is being very conservative in its financial projections — and always has been. Take the following chart from NBN Co’s business case. It projects NBN Co’s predictions about customer speed uptake versus the predictions of major networking hardware supplier Alcatel-Lucent. 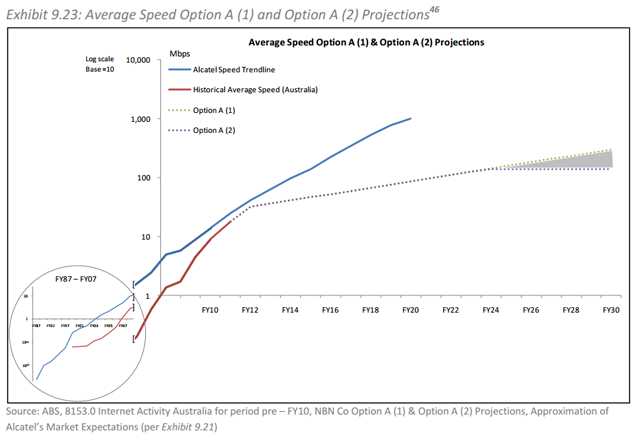 As you can see, Alcatel-Lucent has always predicted the levels of real-world speed uptake that NBN Co is seeing now. And in fact, NBN Co itself admits this very fact in its business case. “This presentation illustrates NBN Co’s conservative expectation that the growth in demand for speeds will be considerably lower than the extrapolation of increasing speeds implied by the history of Internet access technologies,” the company says, in accompanying notes to the chart. Well, NBN Co, it looks as if you were wrong.

All of this should also have a significant impact on the debate about the viability of the NBN.

One of the Coalition’s most significant and long-running criticisms of the NBN policy has been its belief that the NBN would actually lead to higher long-term broadband prices than currently available. “Don’t be fooled. Don’t swallow the nonsense that an overcapitalised government monopoly is going to lead to lower prices,” Shadow Communications Minister Malcolm Turnbull said in a major speech in April. ‘You cannot suspend the laws of economics any more than you can suspend the laws of physics.”

If NBN Co continues to experience the current rate of 100Mbps take-up, however, it seems very likely that the company will end up cutting prices. Whether those price cuts will end up impacting the retail ISP sector will be another matter for debate — but we find it very hard to believe that Australian ISPs would have an easy time raising their prices when NBN Co reaches its fixed rate of return and starts cutting wholesale rates.

“The Rudd-Gillard government’s most notable contributions to infrastructure have been roof insulation that’s caused house fires, school halls built at double the normal cost and a National Broadband Network that’s digging up streets so that families can pay three times the current price for broadband speeds they don’t necessarily want or need and that could be delivered sooner at vastly lower cost,” said Opposition Leader Abbott in early May. Unfortunately for Abbott, it appears as if most Australians do want higher speeds.

Of course, so far we only have a small sample size with respect to NBN uptake. Quigley himself said at the Senate Estimates hearing that he expects the ratios of uptake to level out over time. It’s early days yet. But with hundreds of thousands more customers expected to be signed up over the next year or so to the NBN, it won’t be long before we will know one way or the other just what sort of speeds Australia wants from the NBN — and consequently, just how much more profitable the project will be than it has thus far projected. I suspect we may be surprised by how many Australians do want 100Mbps speeds to their homes and business premises. Quite a lot more indeed.