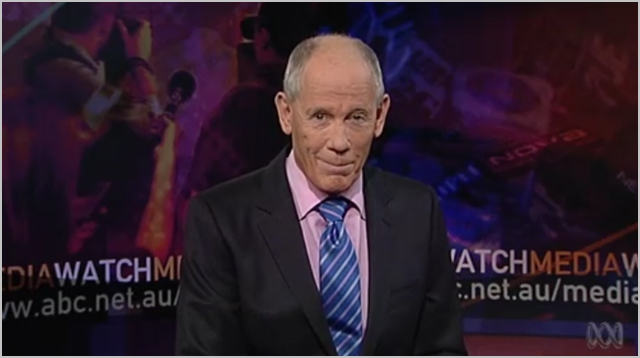 opinion In its criticism of the media coverage of the launch of Apple’s new iPad in Australia this week, the ABC’s normally stellar Media Watch program went too far, alleging journalistic impropriety where there was none, and unfairly targeting media outlets for legitimately covering an important news story which the public was interested in.

I have for a long time (dating back to the days of then-host Stuart Littlemore in the 1990’s) been a stalwart fan of Media Watch. The show’s role as a watchdog on the nation’s media is an important one that has a great deal of benefit to the public, and I enjoy seeing some of the most arrogant individuals in the nation’s fourth estate snarkily taken down a peg on occasion.

In addition, viewing Media Watch every week has obvious benefits for my own career. Viewed with an open mind, the show can act as a significant educational force for journalists like myself — showing us the boundaries of our often free-flowing ethics and highlighting others’ mistakes as signposts which should guide all of us in the media in our daily lives.

In short, I love nothing more than to settle into the couch with a hot chocolate on a Monday night each week and watch the show’s unsettlingly insightful host Jonathan Holmes tear shreds off the media industry in satisfying style. Its chilling tagline — ‘everyone loves it until they’re on it’ — and sardonic witticisms ring all of my bells, and I usually applaud its efforts. I await the day Media Watch chooses to attempt to tear Delimiter to shreds with keen anticipation.

However, this week I couldn’t help but feel that Mr Holmes and his team of researchers had gone too far when analysing coverage of one particular segment of the media sphere which, as a technology journalist, I am rather an expert in — over-hyped product launches by iconic gadget giant Apple.

Media Watch’s three minute segment on the Australian launch of the new iPad several weeks ago started off in standard territory — accusing the media of being too “compliant” in “eagerly dishing out free publicity” for every new launch of an Apple product. This, of course, has long been fair game for media analysts, and every technology journalist worth their salt is aware of the criticism that the media treats Apple differently than it does other companies.

But from that point on, as Media Watch showed clip after clip of the Australian media outlining the new iPad’s features outside various Apple stores teeming with avid wannabe new iPad owners, the program’s criticism of the issue descended into baseless accusations.

“Geeks,” Holmes pronounced, were “queuing up for no reason” to buy the new iPad. This factor, “combined with an all-too-eager media”, generated a “completely artificial story” about the new iPad’s launch in Australia.

In February, he pointed out, Samsung had launched a rival product which supported 4G speeds, “a genuine technical advance on what’s currently available”, whereas the nation’s current affairs programs had failed to inform Australian viewers that the new iPad wasn’t capable of the same. And when they did, they didn’t do it well enough. Holmes told his viewers: “Unlike Seven and Ten, the guest geeks on Nine and the ABC did eventually get around to the 4G issue – though it was no big deal, said [ZDNet.com.au reporter] Luke Hopewell.”

The ABC came in for particular criticism, due to a well-known clause in its editorial guidelines which stops the broadcaster’s journalists from mentioning product brands on air too much. “Why on earth,” Holmes wondered, “did ABC News Breakfast spend nine minutes in all on a bunch of tech-heads queuing outside a shop with a piece of fruit on it, to buy a marginally updated product that they could have got anywhere?” Written between the lines was Media Watch’s obviously self-aware attempt to adhere to those same guidelines itself.

The only problem with this is that from the perspective of someone who’s been covering Apple and technology products in general for a decade now, the overwhelming majority of the coverage which the Australian media generated around the launch of the new iPad locally — and certainly every clip Media Watch showed this week — was spot on the money; a fact which Media Watch did not appear to understand.

Almost all of Australia’s tech press correctly reported that the major new feature on the new iPad was the significantly enhanced resolution of its display, which genuinely represents something of a step change in touchscreen technology. This level of technology is simply not available from any other manufacturer and really enhances users’ experience of tablets in a way which has not been seen before.

In addition, while there is some interest in 4G mobile broadband speeds from early adopters, most of Australia’s more than a million iPad owners appear to be more than happy with their 3G speeds on their iPads so far. The new iPad does offer significantly enhanced network speeds in Australia over the previous iPad 2 due to, as Hopewell plainly noted, its dual-band HSDPA support, and I can’t see many people not buying a new iPad because of the lack of 4G support.

Recent research from IDC has even suggested that most Australians who are buying tablets are buying Wi-Fi only models — indicating that mobile broadband support is often not an issue at all. There will no doubt be some, but I cannot see a significant proportion of the market buying a Samsung Galaxy Tab 8.9 4G instead of an iPad (you see, I can happily mention product names, as Delimiter is part of what Holmes referred to as the “commercial” press) on the basis of its support for 4G speeds.

In fact, as analyst firm Telsyte has recently revealed, not many people are buying tablets that aren’t iPads at all.

In 2011, the company reported, Apple sold about one million iPads in Australia, representing around 76 percent of the total local market for the tablet category (and that’s a conservative estimate: I personally estimate Apple’s share as being much higher in Australia, and IDC agrees, estimating 84 percent). Other companies — Samsung, ASUS, Acer, Toshiba, Research in Motion, HP and others — took virtually no market share.

Why? Well, to put it bluntly, and I can, because Delimiter has reviewed almost every tablet available in Australia, the rival products are usually not that good. With the potential exception of one or two promising models, Delimiter’s reviews of tablets over the past year have shown that the iPad is the clear winner in the tablet category, by virtue of its feature set, software support, build quality and more. This makes sense, when you consider that the tablet category is one which Apple singlehandedly created several years ago. Everyone else is still playing catch-up.

In short, Media Watch’s complaint that technology journalists are focusing too much on Apple’s iPad really makes no sense, when you consider the fact that for Australia’s consumers, the word “tablet” basically equals “iPad”, in any practical sense. The ABC would be hard-pressed to avoid mentioning the iPad in its coverage of the tablet market. Why? Because the iPad basically is the tablet market. And the device is currently revolutionising everything from cabinet meetings to restaurant menus. It is more than a product; it represents a wave of techno-sociological change.

Media Watch’s other major criticism of the coverage — that it was silly to film queues outside Apple stores — also rings hollow.

As sociologists globally have made clear over the past few years, and as I have witnessed when I have personally interviewed consumers at half a dozen Apple queues over the past few years in Sydney, customers do not queue up outside Apple stores solely to be the first to buy the company’s new products when they launch. They do it because Apple has become something more than a gadget company, and its customers have signed on to something which is more akin to a social movement than a simple product buy. Apple is truly a company which has truly made a ‘dent in the universe’, and people line up to buy its products to support the realisation of that incredibly ambitious ideal, which has changed the world forever.

“The Apple lines have become a cultural phenomenon,” social psychologist Matt Wallaert told the Daily Mail in the UK several weeks ago. And the Guardian even reported a poll which said that a significant proportion of consumers reported they were queueing up because they were “die-hard Apple fans”, or “there to soak up the atmosphere”. That’s right — they care about Apple, the company and its products, and want to be part of a social movement.

It’s a completely legitimate idea to want to be part of such a movement, and in fact such movements are very common in the technology industry, which has a habit of changing people’s lives in revolutionary ways. Over the years sub-cultures have grown up around companies and platforms such as Apple, Windows, Linux, Android, broadband, video games and many others. Each is legitimate and useful for its time in its own way; in fact, important technological innovation is often directly spurred by such communities.

For Mr Holmes and his team to mock this as “geeks queuing up for no reason” belittles this sub-culture and is an example of exactly the kind of media stigmatism and stereotyping which Media Watch is normally so good at highlighting at other media outlets.

As the ABC’s head of continuous news Gavin Morris told Media Watch, in a response (PDF) which Media Watch chose not to broadcast on its program: “I do not disagree with the program team’s decision to cover the story. Any event which prompts people to camp in the street for days in anticipation has relevance to the audience and merits some coverage.”

I don’t disagree with Media Watch’s decision to examine and criticise the media’s coverage of the Australian launch of the new iPad. I hate hype around Apple products as much as the next man. But this segment didn’t deliver what I have come to expect from Mr Holmes and his team — insight and understanding of the issue which they’re reporting on. Perhaps next time Media Watch can actually dig under the surface rather than grasping at well-worn straws.

PS: One more thing, Media Watch: Now that I’ve got your attention, could you take a look at News Ltd’s coverage of the National Broadband Network debate? Here’s a good place to start. Or here. Or, you know, here. Or here. Australia’s frustrated technology sector would really appreciate that. Cheers!

Image credit: Still from the ABC’s Media Watch program, believed to be covered under fair use