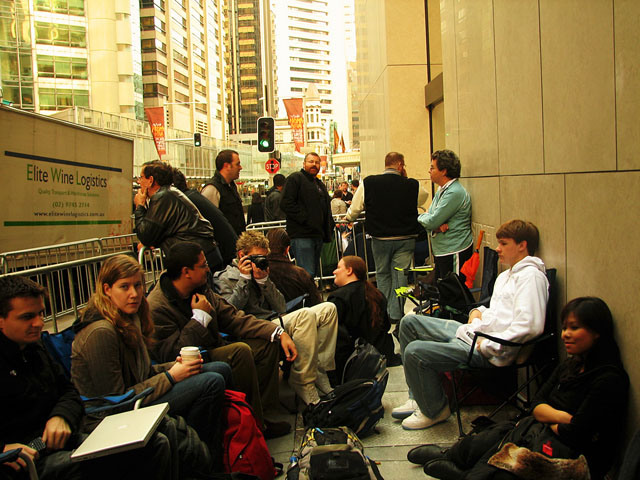 opinion Embedded in much of the coverage of the Australian queues for the iPad 2 several weeks ago was a not-so-subtle implication that those who lined up for hours and sometimes days to buy the hyped Apple tablet must be somewhat crazy.

In a headline which nakedly posed a pun about the Apple fans’ intelligence, the Sydney Morning Herald titled a story on the subject ‘iQueue test for Apple fans who line up overnight for iPad 2’.
A string of stories published by News Ltd newspapers also reinforced the impression that fans were somehow stupid to be lining up – or at least that doing so didn’t make any common sense.

“SALLY Johnson, 73, may be hot and tired, but that hasn’t deterred her from queuing outside the Apple Store in Sydney for an iPad 2 tablet,” wrote The Australian. PerthNow quoted an un-named source as describing the creation of the queue by Apple fans as “a cynical marketing exercise by Apple to create some hype”.

Another article in the Australian implied that it was more normal to be enjoying drinks with their friends at the time of the iPad launch – Friday at 5pm – while News.com.au devoted an entire article to an interview with Alex Lee, first in line outside the Sydney CBD Apple store, explaining why the Apple fan wanted to queue for the iPad 2.

And yet there is much to suggest that those who lined up for hours and sometimes days to buy the iPad 2 are nothing less than very sane.

As many in the queues pointed out, given past experience with Apple product launches, it was widely expected that Australian retailers would run out of iPad stocks within hours of the product’s launch. And they were right – news stories in the weeks since the launch have made clear that iPad 2 stocks are still extremely scarce in Australia. Lining up early was the only way to guarantee getting one.

So why it is imperative to get an iPad 2 as soon as they come out?

The answer is simple – in 2011, many Australians depend on technology to get the most from their live in a wide variety of ways. Any technological improvement or upgrade which will allow them to do things faster or more efficiently has the potential to impinge on the quality of their life in a major way.

A good example would be the addition of a second monitor to each staff member at a workplace, or regular upgrades to the latest software. Anyone who is still stuck using Windows XP and Internet Explorer 6 at work will tell you that they could be a hundred times more productive with a new PC and a couple of 24” screens.

The iPad 2’s actual innards and functionality aren’t that different than those of the original iPad. But the device is radically thinner and lighter – a factor that will make a big difference in your life if you’re carrying it around every day, as many people we know are. Is this enough of a difference to make you line up for 48 hours on the street to buy one, instead of waiting for months for stock to arrive?

For many people, yes.

Then, as Sydney queue leader Alex Lee pointed out, there is the attention and camaraderie associated with being in the queue.

When I visited the Sydney CBD queue on the night before the launch, the mood in the queue was through the roof. Technology company LogMeIn, whose offices are just around the corner, had delivered free pizzas to the several dozen people lining up, friendships were forming, and the general atmosphere was something like being in a buzzing cafe.

Those lining up had been interviewed by the press more or less continuously throughout the day, and on the Internet they had become celebrities, with a dedicated Twitter hash tag, photos being posted everywhere and many following their every move. Video interviews were also starting to make their way online.

It’s not everyone’s cup of tea – but there are many hundreds of thousands of people who would kill to be in this kind of media limelight – even if only for a day or so.

One last fact also weighs in the favour of those lining up to buy the iPad 2: Their passion.

We live in an age where many are disaffected with the traditional gods of human civilisation. Much of humanity’s belief in the strength of religions, economic modes such as capitalism or communism, political parties or even idealistic movements has faded away as we are gradually becoming more educated, our political systems are becoming more open and poverty is gradually being eradicated.

In this context, new passions have arisen. Passion for new technology is a logical one – as technology demonstratably adds value to human existence and allows us to achieve much more than we could without it. We also live in an age where technological advances are achieved and made available to the mass market constantly.

Lining up in an iPad queue is a simple celebration of the fact that we are advancing forward as a species rapidly, and that there are new things to be excited about.

In summary, next time you see an article questioning the intelligence of those who spend several nights on the streets lining up for an Apple product – or, indeed, a product from any other technology company – don’t believe the implication of stupidity.

Those who queue are more brave, more popular, and more ahead of the curve than those who watch, jeering and laughing from the sidelines. They might be Apple fanboys, but they also passionate, courageous, connected individuals. And that is truly something to celebrate.

The author’s sole queuing experience was a three hour wait on a chilly Sunday morning from 6AM for an iPhone 3G. He took his Nintendo DS and a bottle of water.