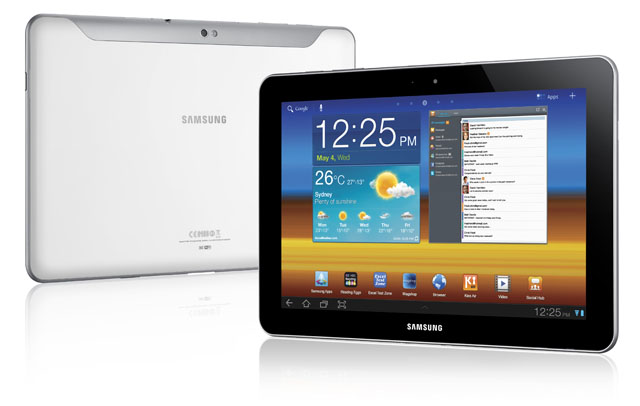 news Airline Virgin Australia has revealed plans to use Samsung’s Android-based Galaxy Tab 10.1 device to launch Phase I of its new in-flight entertainment system on most of its Boeing 737 and Embraer E190 aircraft in April 2012. Business Class guests on all sectors will be able to use the Galaxy Tab while Economy Class passengers taking flights over three hours will have access to the device.

The move comes as a response to customer demand for comprehensive in-flight entertainment on these longer sectors. In a statement on the airline’s website, Martin Daley, group executive product and guest services said that the Samsung Galaxy Tab’s high-resolution graphics and excellent sound would provide an outstanding on-board entertainment experience.

Daley said that the first phase would provide the Galaxy Tab 10.1 to guests pre-loaded with a range of movies, television and audio programs for their entertainment and information. He added that the group felt the device was the perfect choice to experience the next generation of in-flight entertainment.

Daley explained that Phase II would involve the roll-out of a leading edge Wi-Fi system developed by Lufthansa Systems. “In Phase II guests will have access to a wide range of products including video and audio streaming delivered on demand to their own personal electronic devices, Wi-Fi enabled laptops or the Samsung GALAXY Tab 10.1,” he said.

With these technology features, the Galaxy Tab constitutes the perfect companion for guests’ in-flight entertainment, according to Daley. Other features include a 16:9 screen aspect that enhances the movie viewing experience, improved screen sharpness with 149 pixels per square inch, and a lightweight (565 g) and slim (8.6 mm thickness) design that makes the device easy to hold.

Virgin Airlines is following in the footsteps of Qantas, which had started using Apple’s iPad 2 for in-flight entertainment for all passengers in Economy and Business for the duration of their flights. Australian Business Traveller had reported that the trial was slated to carry on through February under the name ‘Q Streaming’, but restricted to a single Boeing 767-300. The plan included one tablet for each of the aircraft’s 254 seats, along with sufficient spare devices. The iPads would be ‘locked down’ to ensure that they did not have any capability not approved by the airline.

Earlier, in June 2010 low-cost airline Jetstar had revealed plans to trial the iPad as an in-flight entertainment option costing customers $10 to rent on board selected domestic routes.

opinion/analysis
While all of this seems quite fine and dandy, one does wonder whether the on-board Wi-Fi will be able to keep up with the demands of streaming video to all of these tablets. In-flight entertainment systems are often sketchy at best when they feature wired connections. Will the airlines install enough Wi-Fi access points so that everyone on board can stream video to their seats simultaneously?