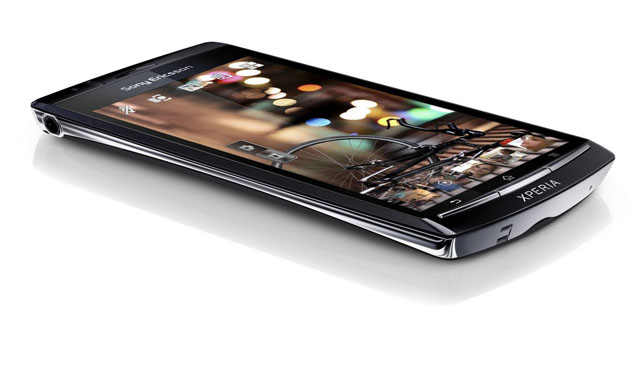 review Sony Ericsson isn’t a name that crosses our radar all that often, but it sure makes a nice change from our usual diet of HTC, Samsung and Motorola devices. The Arc S is a slim, stylish, and well-equipped smartphone that makes the most of its family connections by integrating Sony-specific technologies like Bravia Engine and Exmor R Mobile. But its asking price pits it squarely against high-end devices like the Samsung Galaxy S II and the Motorola RAZR. Does it have what it takes to challenge these uber-popular handsets, or has Sony Ericsson priced itself out of the competition?

Design
Some Android smartphones look so darn similar that we’d be hard pressed to tell them apart in a lineup. The Arc S doesn’t have that problem. It’s an elegant slab of glossy black plastic that’s accented with an eye-catching chrome frame and matching chrome buttons. It has an unusual shape as well, with lines that bow out slightly at each end, and a back that arcs inward. It also rivals the Samsung Galaxy S II for skinniness, measuring 8.7mm and weighing only 117g (the Galaxy S II is 8.49mm and 116g), and despite having a sizeable 4.2” display, it’s only half a centimetre wider than the iPhone 4/4S.

That’s the good news. The bad news is that we found lots to complain about elsewhere. The glossy coating on the front and rear of the Arc S quickly end up a CSI treasure trove of fingerprints, which means you’ll constantly be wiping grease off the surface. The headphone jack is poorly-positioned on the left hand side, making it awkward to have headphones connected while the Arc S is in your pocket, and while we like the indicator light on the right-hand side, its position on the right-hand edge makes it easy to miss, all the more so because it’s small and not really bright enough to notice in daylight. Even the camera is badly-positioned – it sits right at the top of the rear casing, just where your left-hand middle finger is likely to be resting to steady the phone against camera shake. To top it off, the Arc S commits one of our pet peeves of having a microSD card slot that you can’t get to without pulling out the battery.

Features
The Arc S acquits itself fairly well for a mid-range smartphone. It has a 1.4GHz single-core processor, 512MB of RAM, Adreno 205 graphics and 320MB of internal storage, the latter of which is supplemented by a bundled 8GB microSD card. There’s a micro-HDMI output on top (with a bundled micro-HDMI cable on the box), and it supports USB OTG for connecting USB keyboards and mice – although the requisite adapter isn’t included, and it doesn’t read flash drives. If you’re partial to a bit of video calling or self-portrait action, it’s also worth noting that the Arc S doesn’t have a front-facing camera.

As far as software goes, the Arc S runs Android 2.3.4, with a Sony Ericsson UX software layer on top that adds a custom homescreen and lockscreen, an iPhone-like apps launcher, and a themeable interface. Unlike the HTC Sense user interface, UX keeps the visual effects to a minimum while adding useful extras over the default Android interface.

One of the Arc S’ strong suits – at least, on paper – is how liberally it borrows technologies from other Sony holdings. The 8.1 megapixel camera uses a mobile version of the Exmor R backside-illuminated sensor found in the latest Sony Cyber-shot cameras, while the 4.2″ display utilises the same Bravia Engine technology found in the Sony HDTVs. The Arc S hasn’t inherited any gaming functionality from PlayStation (perhaps to distinguish it from Sony Ericsson’s gaming-oriented smartphone, the Xperia Play), but Sony Music and Sony Pictures (along with other music and movie publishers) are also represented in the bundled Music Unlimited and Video Unlimited services.

But how do the Sony technologies stack up in practice? The 8.1-megapixel camera is certainly above average as far as smartphones go, with cool features that include the dedicated camera launcher, the rapid shutter that automatically snaps the photo after the auto-focus kicks in, the scene recognition mode, and the intuitive 2D and 3D sweep panorama modes. However it it doesn’t capture as much as detail as the best 8-megapixel cameras we’ve tested, like the Samsung Galaxy S II and the Apple iPhone 4S.

Likewise, the 4.2″ “Reality View” LCD display (854 x 480 resolution) is bright and exhibits strong colours, but it’s no match for the Super AMOLED displays that have become the norm in high-end Android smartphones.. The difference is obvious when you put the two screen types side by side; the LED backlight on the Arc S’ screen can be seen behind displayed colours, making them milkier and less saturated. You can also see the backlight coming through when you tilt the screen at different angles. Things improve somewhat when the Bravia Engine kicks in while you’re viewing photos or movies – the contrast deepens and viewing angles improve.

Performance
For day-to-day use, there isn’t a whole lot to separate the Arc S from dual-core Android smartphones. It doesn’t play high definition videos out of the box, but we were able to play back a 720p MKV file using the third party app DicePlayer very smoothly. There’s only the rare occasion when apps take a bit longer to launch compared to a dual-core phone. The Arc S also performed surprisingly well in Rightware Browsermark, achieving a score of 77,975 – this is a significantly better result than we’ve gotten from any other Android smartphone we’ve tested save for the Samsung Galaxy Nexus. The Android software build seems a little buggy though – we got more than a few ‘force close’ errors in third party apps that ran with no problem on other phones.

Sony Ericsson phones have always had a reputation for outstanding call quality, and the Arc doesn’t let the team down in that department. We had no trouble hearing callers in a cafe with loud music playing, and likewise callers, had no difficulty hearing us thanks to the secondary microphone that does a good job at eliminating background noise. The external speaker is powerful as well, so you won’t have any trouble hearing the phone ringing, and videos are plenty loud for personal use. Oddly, data switches off whenever a call comes in, so if you’re downloading a file in the background or have a chat session active, it will cease if the phone starts ringing.

We found battery life to be a little below average; with light use (consisting of 2.5 hours of screen-on time, 15 photos and five minutes worth of calls), the Arc S lasted for 23 hours and 47 minutes – around 15 minutes short of the average run-time for a dual-core phone, and we’d expect a single-core phone like the Arc S to last longer. That said, we thought it would conk out a lot sooner than it did. At the 20-hour mark, it threw up a 10% battery left warning, and yet managed to limp on for another 3.75 hours with minimal use.

Conclusion
Most of our complaints with the Xperia Arc S are fairly petty. The big picture view is that it is a good phone, with a sleek and distinctive design (even if it is a fingerprint magnet), an above-average screen and camera, and some nice extras like a micro-HDMI output and an 8GB microSD card.

The deal-breaker is that it’s priced as a high-end smartphone, with an outright pricetag of $600 and plans starting at $69 per month with its exclusive carrier, Telstra. Put in that perspective, it’s really no match for devices like the Samsung Galaxy S II (also available through Telstra) and Motorola RAZR (available exclusively through Optus), both of which are available for a cheaper $59 per month and come with superior screens, faster processors, more storage and better battery life. There’s also the recently-released Samsung Galaxy Nexus, which is available for the same $69 per month through Telstra, and even cheaper through Optus and Vodafone.

If you can get it cheaper – say, for $500 or for $49 a month – the Arc S is worth considering. But if not, we can’t think of any reason to recommend the Arc S over the better, dual-core smartphones.