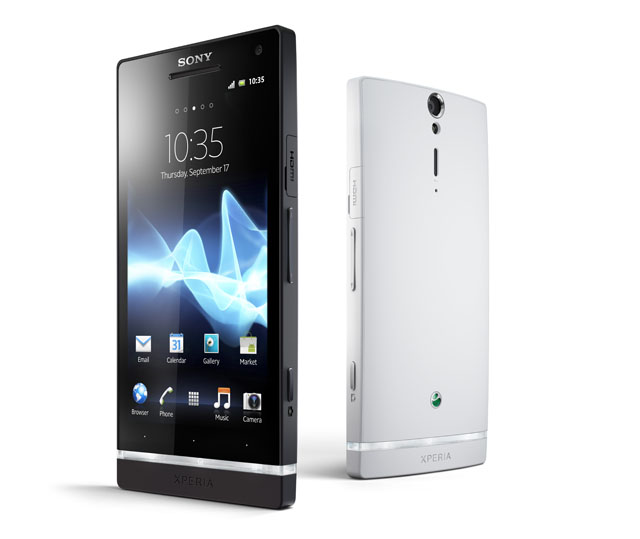 review While its competitors are sleek and sexy, the Android-powered Sony Xperia S is large and in charge.

Design
The $579 Xperia S is one of Sony’s first efforts after breaking up the Sony Ericsson partnership. To be honest the phone doesn’t really make a great first impression. It’s a clunky monolithic beast with none of the slender waistlines, rounded corners and tapered edges found on competitors such as the HTC One X and Samsung Galaxy Nexus.

For all its bulk the Xperia S only offers a 4.3-inch display surrounded by a thick black bezel, plus an odd-looking clear plastic strip which supposedly houses the antenna. The phone’s touch-sensitive Home, Back and Menu buttons are above the strip, but they aren’t always that sensitive and you’ll find yourself repeatedly stabbing at them until you get used to them.

At this point the ugly Xperia S seems like the boxy Volvo of Android superphones, but thankfully there’s plenty of goodness buried within. For starters the 4.3-inch 1280×720 pixel display offers a 341 dpi pixel density which even surpasses the iPhone 4S’ retina display. That’s the same number of pixels as the HTC One X and Samsung Galaxy Nexus, but with the Xperia S you’re trading a bigger screen for a sharper screen.

The LED-backlit LCD screen on the Xperia S is bright and crisp, offering even whiter whites than the iPhone. It’s comfortable to read on and fine for watching videos, but is unfortunately marred by narrow viewing angles which make it look washed-out unless you’re staring at it straight on.

Features
This impressive crisp, bright screen comes in handy, because the phone’s key strength is multimedia. It packs 12 megapixel rear and 1.3 megapixel front cameras, supporting 1080p video at the rear and 720p at the front. As you’d expect it captures impressive shots both indoors and out, offering strong low-light performance if somewhat noisy in the shadows.

You’ve got no shortage of entertainment choices thanks to access to Sony’s Music Unlimited and Video Unlimited subscription services. They’re also compatible with Sony televisions, Blu-ray players and home entertainment systems along with the PlayStation 3 and Vita. This entertainment ecosystem is Sony’s strength over other Android handset makers and the Japanese entertainment giant wields this weapon to full effect with the Xperia S. If you live a Sony-centric lifestyle, this is almost certainly the phone for you.

Along with Sony’s online content and the ability to copy files from your computer, the phone is also a DLNA player and server. Plus you’ve got the benefit of Adobe Flash for tapping into Catch up TV services such as the ABC’s iView. If that’s not enough to keep you entertained, the Xperia S is also a “PlayStation Certified” device offering access to the PlayStation Store, including a range of PSOne games.

Performance
Supporting all this multimedia goodness is a beefy 1.5 GHz Qualcomm dual-core processor and 1GB of RAM. Designed to support that high-res display, they keep things feeling snappy and video running smoothly. In terms of benchmarks the Xperia S falls well short of the 1.2 GHz ARM Cortex-A9 dual-core Samsung Galaxy Nexus when running Rightware Browsermark and SunSpider. I’m not sure that’s a fair fight considering the Xperia S is only running Android 2.3.7, with an Ice Cream Sandwich update coming later this year.

Power users could always root the phone and install their Android flavour of choice, but it would be a shame to lose all of Sony’s added extras. One thing I wouldn’t miss is Sony Ericsson’s Timescape UI, a rather drab Android skin which I must confess has never really impressed me, but such things come down to personal taste.

The Xperia S is a 14.4 Mbps HSDPA device, available from Optus and Vodafone, with the usual suspects such as Wi-Fi 802.11 b/g/n and Bluetooth 2.1 with A2DP and EDR. As for connectors you’ll find micro-USB and micro-HDMI but no micro-SD, so you’ll have to make do with the 32GB of onboard storage. It’s not as generous as it sounds considered the phone’s entertainment bent.

Entertainment
Getting back to the lounge room, the Xperia S features a micro-HDMI output like many Android devices. But once again Sony goes the extra mile to deliver something special — a customised 720p TV-friendly user interface making it easy to launch apps and find your way around the menus.

Controlling the phone is obviously awkward if your HDMI cable doesn’t reach to the couch. What’s really impressive is that you can also control the phone using your TV’s remote control, as long as your TV features CEC-compatible HDMI inputs. Driving your phone from the couch is pretty impressive if you’re happy with basic multimedia functions such as music, video and photos. You’ll be frustrated if you’re hoping to control much more.

As if the multimedia features weren’t enough to stand out from the crowd, the Xperia S also supports Near Field Communications and actually puts it to good use. The phones comes with two NFC SmartTags and you can buy more. You can program the phone to trigger a string of commands when it’s held alongside a tag, with the supplied tags enabling car mode and the bedside clock/alarm mode.

The list of commands is completely configurable, so you could have one SmartTag by the front door and another at your office to easily switch configurations as you move between different environments. Admittedly you’ll already find apps such as Locale for triggering location-based events, but the NFC tags offer an extra level of precision. Alongside NFC, the phone also employs a LiveWare feature which can trigger actions when specific USB devices are connected.

Conclusion
It might be an ugly phone. Actually no, it *is* an ugly phone. But Sony’s Xperia S is truly bulging with features. Whether this is the right phone for you depends what you’re looking for. Personally I’d still lean towards something like the HTC One X which is nicer to use as an all-round smartphone — it’s got a sleeker design, bigger display, slicker interface and the great taste of ICS. But if you’re after a multimedia king then the somewhat drab Xperia S could be your dream Android companion, especially if you live a Sony-centric lifestyle.