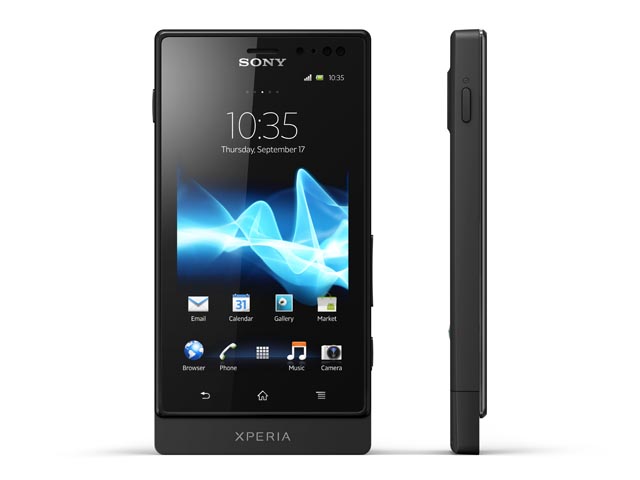 review With Sony’s mid-range Xperia Sola, you get many of the features available on higher-end competitors, at a much cheaper price, and it all comes wrapped in a nice package that sits well in the hand. But does the Sola do enough for the money? Read on to find out.

Design
Like a number of other smartphone vendors, it looks like Sony has been taking some of its design cues from Apple recently. The Xperia Sola is almost exactly the size of Apple’s iPhone 4S in every dimension (height, width and depth). However, this isn’t a bad thing. As with the iPhone, the first thing you’ll note when you pick the Sola up is that it sits nicely in the hand; it’s the perfect shape for our medium-sized hands, at 116mm by 59mm by 9.9mm.

The Sola is a little lighter than the iPhone, however, at 107g, and like most of the new breed of smartphones, it’s made out of different materials; soft matte plastic on the back and sides, with reflective plastic surrounding its 3.7″ screen. These are all good things; in 2012, we find the iPhone is heavier than it needs to be. The Sola also has a little lip at the bottom of the screen with the Xperia logo. But don’t be fooled as some people we handed the Sola to were — there’s no extendable keyboard underneath that lip. It’s merely there for the sake of design. On the left-hand side of the Sola is a small power button; on its top is a 3.5mm audio jack, while on the side are a micro-USB port, a volume rocker and a dedicated camera button. On the back sits its camera and flash. And there’s three separate locations where the Sony or Xperia branding is stamped.

Now, if you’ve followed this far, you’re probably thinking: Big deal. The design of the Xperia Sola isn’t anything special. The Sola doesn’t have the eye-catching design of any of the hyped top-level smartphones out there; the Galaxy S III, the HTC One series, or even Apple’s iPhone. However, don’t discount the model for these reasons.

Like Samsung’s Omnia W, the Sola is one of those smartphones which just sits really nicely in the hand or in the pocket, alongside even a bulky wallet or keys. It’s not too small or too large; it’s perfect for one hand, and you’ll enjoy picking it up and playing with it. Not everyone wants a hero smartphone or an eye-catcher, and the Xperia Sola will fit the bill for many of those people. Its design is unassuming but still lovely. And if you pick up one of the different coloured models, it can still stand out in a crowd with a vibrant red option, for example.

Features
On paper the Sola’s featureset is not fantastic. At its core it runs a 1GHz dual-core CPU, with version 2.3 (Gingerbread) of Google’s Android operating system, although Sony says it is upgradable to Android 4.0 (Ice Cream Sandwich). Its five megapixel camera can shoot video at 720p (HD) and comes with the normal range of features such as face detection, flash, geotagging, red-eye reduction and so on.

The Sola does have a near-field communications (NFC) chip for mobile transactions, and its screen (covered by “scratch-resistant glass”) runs at a resolution of 854 by 480 pixels. It has 8GB of internal storage, plus a microSD memory card slot, supporting expansion of up to 32GB. Its battery is a 1320 mAh model that supports video playback or talk time of up to 6 hours. We saw no reason to doubt this battery rating.

Many buyers will be underwhelmed by this featureset, representing as it does the previous generation of handsets rather than the latest technology. It’s increasingly the norm in mid-2012 to see quad-core CPUs or at least dual-core at 1.5Ghz, Ice Cream Sandwich pre-loaded, cameras up to 12 megapixels, screen resolutions of 1280×720, 4G network speeds and so on. In this company, the Sola doesn’t cut the mustard.

However, it’s also worth noting that many users won’t really use these features; to many Australians, larger screens, more powerful cameras, better operating systems and faster network speeds aren’t necessarily what they need or want. In this context, it’s worth noting that the Sola’s power is more than capable of allowing it to perform smartphone tasks such as web browsing, emailing, taking decent photos, accessing social media, watching and filming HD video and so on. There is a certain bar which makes a decent smartphone, and the Sola meets that standard.

There are a few other Sony-specific or Sola-specific features to the Sola which are worth mentioning. Sony has implemented what it calls ‘floating touch technology’ in the phone, which allows users to hover their finger over the screen, so it acts as a moving cursor. This can be used, for example, to make sure you click the right link on a finicky website. There’s also NFC SmartTags (see a quick video demo here), which are physical tag devices which you can touch with the Sola to automatically turn on certain features on the phone — such as turning on GPS when you get into your car, for example.

We consider both of these features to be quite interesting and innovative, but it’s hard to see much application in your every day usage of your smartphone. Android is already such a strong operating system; I’m not sure that most users would use either feature on a regular basis. The same can be said for the bundled apps (especially around multimedia) which Sony has installed by default on the Sola. They can be interesting to play with and improve on the default in some areas, but we suspect many people just want the default Android experience, with apps they will be able to continue to use if they switch manufacturers down the track.

Performance
To be honest, we were quite surprised by how good the Xperia Sola’s performance was, for its modest specifications.

The first thing you’ll notice when using the Sola is that its interface is a little cramped for its screen size (especially what appeared to be a down-rezzed system font), and we didn’t feel the quality of that screen was fantastic during normal use (although it does look quite nice when HD video is displayed on it). However, where manufacturers like HTC have embedded a high degree of glitz and glamour in their customised Android interfaces, Sony has gone for a more minimalistic approach. Combined with its relatively speedy CPU, what this means is that in practice, using the Sola felt quite smooth and quick; as quick as many higher end phones.

Some of the nice little user interface touches that you see on higher end phones are here — such as a background which dynamically changes when you flick left or right — but these didn’t seem to compromise the Sola’s performance. Typing, browsing, loading applications; all of these functions were quite quick on the Sola, and we didn’t have any problems with graphically intensive apps or HD video. This isn’t a smartphone by half-measures; it’s a real smartphone and performs like one.

The smartphone’s camera was also quite solid. It didn’t deliver on the stunning quality you’d see on a higher-end smartphone model such as the HTC One XL or iPhone 4S, but it was still more than acceptable, especially in good lighting conditions. I wouldn’t expect great photos at night, but you’re not usually going to see terrible shots, either. Again, overall the camera is better than you would expect for the price.

Battery life on the whole was pretty good. One of our favourite battery life tests for smartphones is to charge them fully, then leave them on our desk for two to three days. Some high-end smartphones, such as the One XL, will run out of juice during this period. But the Sola survived this test, and normal activity didn’t seem to suck its battery too much. We’d say you’ll definitely need to charge this little baby every couple of days or so; but you’re not going to worry about running out of juice absolutely every day as you will with some other models.

Conclusion
For a mid-range smartphone, the Xperia Sola is surprisingly solid. You’ll find decent performance here, and most of the functionality which higher-end smartphones offer, at a much more affordable price. We consider the $499 outright which retailer Harvey Norman wants for the Sola to be a little too much, but Mobicity is selling the phone for $349 on sale, which we consider fair value for this little gem. If you’re after an unassuming and comfortable smartphone which will do most of what the higher end models will, but don’t want to break the bank in the process, we recommend the Sola as a solid option in its class. Don’t expect the earth, and you won’t be disappointed.

Other reviews of the Sony Xperia Sola which we liked: CNET.com.au and PC World Australia.