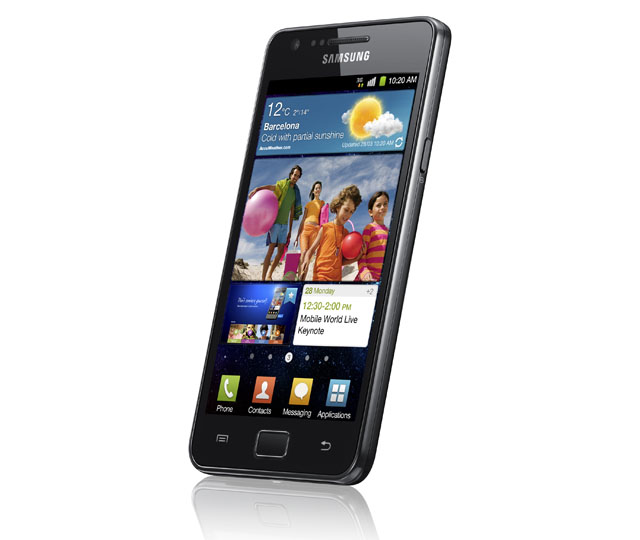 review Slowly but steadily, Samsung has been nibbling away at the iPhone’s lead. The company sold 10 million Galaxy S smartphones worldwide as of January this year (less than seven months after it launched), and the sequel, the Galaxy S II, is on track to beat it, having already reached three million sales in 55 days. But how does the handset perform up close — is it over-rated, or does it deserve its plaudits? Read on to find out.

Design
The Galaxy S II achieves the near-impossible feat of making the iPhone 4 look chunky. A tiny 8.5mm waistline makes it the slimmest smartphone yet, and it’s remarkably light at 116g. This is all good on paper, but in practice, the plastic construction makes the Galaxy S II feel cheaper than it is. The angular lines and wider-than-average dimensions also make it awkward to hold and use one-handed. You can get used to it, but it just doesn’t hug the hand like many other phones.

Calling the Galaxy S II attractive would be a stretch. It’s discreet at best, with an all-black casing that pairs a glossy front with a textured battery cover. Viewed head-on, the edgeless 4.3″ screen is indistinguishable from the surrounding bezel, giving the illusion of a larger display.

Buttons have been kept to a minimum: there’s a single, iPhone-like home button on the front, flanked by two capacitive buttons (menu and back) on either side, a volume rocker on the left and a power/sleep button on the right. The microSD card slot is located behind the battery cover, and, annoyingly, you have to remove the battery before you can get to it.

Features
The Galaxy S II runs the latest Android 2.3.3 (Gingerbread) operating system, and nearly all of its features rate as the best-in-class for their respective categories. The 1.2GHz dual-core Exynos processor (paired with a 1GB helping of RAM) is currently the fastest on the market, and the 4.3″ screen is as large as they come for smartphones – and is also the only one that uses Super AMOLED Plus display technology.

It supports 21Mbps HSDPA, and comes with 802.11n Wi-Fi, Bluetooth 3.0 and DLNA wireless media streaming. 16GB of internal storage can be supplemented with both microSD cards (up to 32GB) and USB flash drives (using an optional USB OTG adapter). While it doesn’t have a microHDMI port built-in, an optional MHL adapter converts the microUSB port to HDMI.

Samsung has done its usual trick of customising Android with its TouchWIZ GUI. Thankfully, it isn’t as much of a performance hog as it was on the original Galaxy S – or perhaps the faster processor makes it run better. Enhancements include a custom launcher and lockscreen, extra homescreen widgets, and modified dialler, contacts and calendar apps.

To top it off, Samsung has thrown in lots of bonus software, like the Navigon turn-by-turn navigation software (worth $49.95 separately), hubs for games, social, reading and music (the latter of which isn’t active yet), Polaris Office, and basic photo and video editing apps. Kies Air lets you wirelessly transfer content between your computer and the Galaxy S II through a browser interface, saving you from having to use the bloated Samsung Kies desktop software, and the free Samsung Dive service offers remote management options like tracking the Galaxy S II over GPS, remote lock and wipe, and the option to ring the phone and access the call logs.

Really, the only feature the Galaxy S II falls short in is its display resolution. 800 x 480 pixels seems wasteful on a 4.3in screen, and it’s especially galling when its two main Android competitors, the Motorola Atrix and the HTC Sensation, both offer qHD 960 x 540 pixel resolutions.

Performance
The Galaxy S II screams through everything you throw at it. The dreadful lag issues we encountered on the original Galaxy S are virtually non-existent; the only times we experienced lag was when ending a call (the on-screen controls take a couple of seconds to appear) and there’s occasionally a brief pause when you wake it up before the screen appears.

Web browsing is buttery-smooth, even on complex websites like that of the Sydney Morning Herald. Inline Flash videos are a little jerky, but still watchable – a big improvement over the Flash performance on single-core Android phones, where page loads would slow to a crawl and videos played more like slideshows.

The Galaxy S II’s rear-mounted speaker doesn’t lack for volume, but an overdose of treble makes music sound hollow. Like Flash videos, 1080p movies suffer from a case of the herky jerkies, and audio frequently loses sync with the picture. 720p and standard-definition videos, on the other hand, play perfectly.

Either way, the Super AMOLED Plus display provides deeper black levels and richer colours than any other smartphone screen we’ve seen, with viewing angles that almost extend a complete 180 degrees. Remember what we said about the Galaxy S II not being much to look at? That all changes as soon as you power on the screen. The vibrant Super AMOLED Plus screen transforms it from a simple black slab to an eye-catching visual sensation.

Performance from the eight-megapixel camera is well above average. Auto-focus – which you activate by tapping on the screen – occasionally misses its mark, but it’s sharp as a tack for the most part. Colours are vibrant without overdoing it, and skin-tones are accurate. The Galaxy S II’s speedy processor makes its presence well felt here, with fast camera startup and quick auto-focus and image processing times. The LED flash is bright to the point of blinding, but it doesn’t overpower the scene, so colours stay relatively accurate. The LED flash can double as a video light when you’re shooting movies, and you can record videos at up to 1080p resolution.

Call clarity could be better, with voices sounding a little muffled and scratchy through the earpiece, but we’ve heard far worse on many other smartphones. Callers on the other end didn’t report any issues, and volume from the earpiece and speakerphone is loud enough to hear on a noisy street.

We’ve all but resigned ourselves to sub-par battery life on high-end phones, and we weren’t expecting anything different from the Galaxy S II. Surprise, surprise: despite the phone’s ultra-slim dimensions, Samsung has managed to cram in an extra-large 1650mAh battery. Coupled with the power-efficient Super AMOLED Plus display and Exynos processor (which underclocks the chip when the phone’s idle), we were able to push the battery to 23 hours and 45 minutes of medium usage before it switched off completely. The downside is that it takes just over three hours to fully recharge from a dead battery.

Conclusion
The Galaxy S was designed to take on the iPhone 4, and despite its warts (sluggish performance, short battery life), it was one of the first real challengers to the Apple empire. We’re guessing that Samsung had the impending iPhone 5 in mind when it built the Galaxy S II, but this has failed to materialise so far, making the Galaxy S II, with its dual-core processor, 4.3in Super AMOLED Plus display and 8-megapixel camera, the most powerful and feature-rich smartphone on the market.

There are other smartphones out there with similar specs, but none of them pull it off as well as the Galaxy S II. Whether Apple actually releases a new iPhone this year remains a question, but if you’re looking to upgrade your current handset now, you can’t do any better than the Galaxy S II.