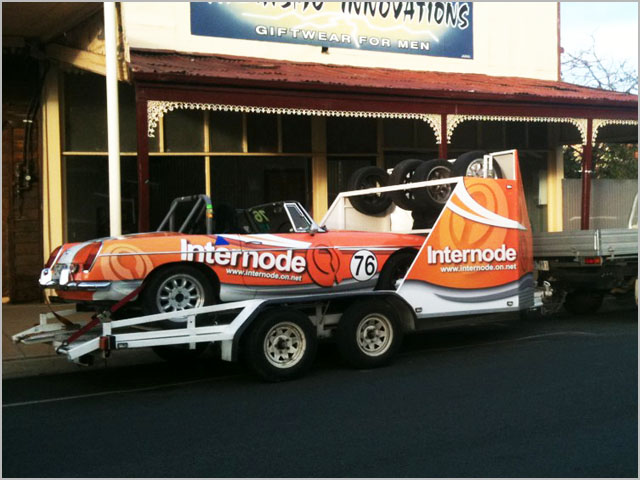 news National broadband provider Internode has signalled it may consider changing its National Broadband Network pricing plans around the launch of commercial NBN services around October, in the wake of the release by rival iiNet this morning of plans that significantly undercut Internode’s prices.

Internode managing director Simon Hackett initially responded to the issue (see statement at the bottom of the article) this morning by stating that the NBN retail market was currently only a “theoretical market” as commercial NBN services would not be available later this year — likely in October. The predominantly fibre-based network is currently being rolled out gradually around the nation.

In addition, Hackett said Internode might factor into its changes by NBN Co in August to its CVC circuit pricing model, which affects how broadband providers provision bandwidth to end customers — although the executive had previously said Internode wouldn’t change its prices in reaction to the CVC rebate offered by NBN Co at the time.

However, in a more substantial post on Whirlpool later today, Hackett went further, arguing that iiNet’s cheaper pricing released today “only makes sense” in light of the NBN Co CVC rebate agreed upon in August. Internode hadn’t changed prices following the CVC agreement because other ISPs hadn’t released pricing yet, he said.

“Starting a price battle with ourselves really wasn’t a sensible step at that time.” However, things had now changed, with rivals such as iiNet and Exetel releasing rival pricing.

“Given that change in the shape of things via (a) that substantial wholesale CVC rebate and (b) that others are finally weighting in … it’s sane and reasonable for Internode to consider adjustments to our NBN retail pricing announcements to date, set up for the point at which commercial signups become possible in general (around the start of October),” Hackett wrote.

“So it’s a pretty safe bet at this point that we’re considering such changes.”

Hackett said it would be interesting to see what sort of NBN prices were published by other ISPs, which have so far remained silent on the issue — “especially Telstra BigPond”. “Meantime – the answer to do ‘do we intend to ignore the activities of others’ is clearly ‘No’. Hence ‘are changes likely from Internode?’… ‘yes’. Watch this space. I’m sure there will be things to see :)” he said.

opinion/analysis
Pretty swift and common sense response from Internode. Hackett’s right — it would be silly for Internode to continually issue new NBN pricing every few weeks as new information comes to light; first the CVC rebate agreement, and then pricing announcements by iiNet and other players. And of course, everything regarding the NBN gets micro-analysed in today’s hyper-saturated media environment.

Secondly, Internode should be applauded for having the courage to “go first” with NBN pricing. As a private company, the company can afford to be a bit more bold at times than rivals like iiNet, Telstra and Optus.

However, I do have to question Internode’s strategy a little. It’s all well and good for Hackett to post a sophisticated response to the ongoing pricing issue on Whirlpool — the fact that the executive reveals his thinking so publicly in this manner reflects Internode’s praiseworthy transparent nature. However, right now, in the broader debate, courtesy of the Coalition and a few hyped articles, the NBN price which is associated with Internode is its top-line $189.95 plan, and only so many people read Whirlpool.

This morning’s release by iiNet will do much to undermine Internode’s pricing position in the mind of the general public — an outcome I’m sure the crafty boys from Perth intended. Internode will need to do some work over the next month or so to help people understand that it’s not going to be the most expensive NBN provider in town. Of course, I’m sure the release of NBN pricing plans from Telstra and Optus will help with that ;)