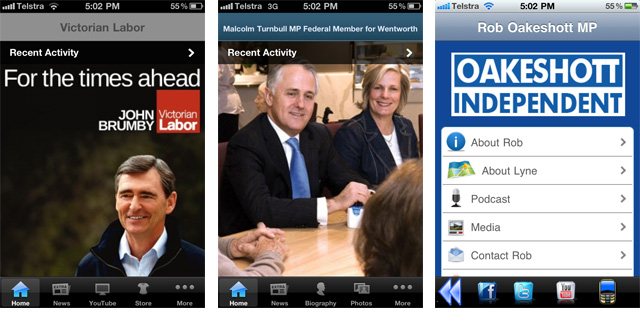 opinion It’s almost eight months until the next US presidential election, but the Obama 2012 campaign hasn’t wasted any time in getting their digital assets in place.

And then, of course, there’s the iPhone app.

A polished effort revamping the original app released in October 2008, the official Obama 2012 iPhone app gives voters a simple way to find out exactly what’s going on with the campaign at a moment’s notice, anywhere on the road. There’s news, photos and videos, a list of events, a messageboard with a welcome greeting, and more. And of course, everything can be re-tweeted, shared on Facebook, shared by email and so on.

Various individuals who were involved in the original Obama campaign have made their way over to Australia over the past several years to speak about how the online environment affected the presidential effort, with one prominent example being Ben Self, who landed down under in early 2009 shortly after the 2008 campaign finished. Self was Obama’s digital campaign director and founder of digital agency Blue State Digital.

And yet, judging by the current state of iPhone apps developed by Australian political parties, it looks as if few Australian politicians have taken notice of the lessons learnt from the campaign. It appears that neither of Australia’s two major sides of politics – Labor and the Coaltiion — has so far developed an iPhone app to help keep their supporters up to date on their activities. Even the Greens – known as a progressive party in touch with the younger generation – don’t have an iPhone app that we could find.

The iPhone apps that do exist in the Australian political sphere appear to either be tied to state-based political parties or even to individually tech-savvy parliamentarians like Rob Oakeshott and Malcolm Turnbull. Flushed with the scent of victory, the Liberal Party of NSW, for example, launched an iPhone app a week before the state election on March 26 this year. And Victorian Labor did the same in November 2010.

In addition, even those political iPhone apps which do exist suffer from many deficiencies.

Rob Oakeshott’s iPhone app loads up with a poor resolution photo of the politician, before loading a fairly standard page with information about his exploits, his electorate of Lyne, and various bits of multimedia content such as podcasts.

However, digging beneath the surface, there’s quite a bit to get frustrated with if you’re one of the independent MP’s constituents.

The GPS locator device, which aims to give transparency around Oakeshott’s location – hasn’t been updated for three months, the podcast area of Oakeshott’s app gives an error from the Joomla content management system, and the YouTube section displays a video from 2008 by default. In addition, Oakeshott’s app is painfully slow to load anything on our iPhone 4.

The Liberal NSW iPhone app is similarly plagued with problems. There’s just not that much content in it, and what is there is poorly formatted for the iPhone screen. Navigation elements look like they’ve been built in Adobe Flash (in a bad sense) and you can’t even get the latest news about the NSW Liberal Party – even the fact that they won the election.

The Victorian Labor app looks really impressive when you load it up … until you realise that the title picture on the page is of former Premier John Brumby, who isn’t even in parliament any more, after he lost the last state election and resigned his post.

At least, however, the app does provide one-touch access to the latest news from Victorian Labor – even after it lost the state election. YouTube videos are also available, if a bit dated, as well as a store for purchasing Labor-branded gear and a host of other options.

The one shining ray of hope for political iPhone apps in Australia is the one owned by former Liberal leader and current Shadow Communications Minister Malcolm Turnbull.

Turnbull’s app does everything you’d want a political iPhone app to do … providing quick access to the MP’s latest articles, media releases and Tweets, up to date photos, videos, a mailing list and more. Not all of the sections are fully updated, and to some extent the app looks as if it’s been put together from a blueprint that could be used for any subject. But at least it works for its intended purpose, despite Turnbull currently being in Opposition, and there not being an election on.

The hard thing to understand is why more Australian political parties haven’t developed their own iPhone app. Darryl King, the founder and chief executive of Queensland development house ireckon, says it’s not that hard to develop the apps once you have collected all the data you need – most of which politicians already have available on their websites.

A prototype app could be developed for between $8,000 and $12,000, he says, which could then be rolled out for individual politicians en-masse for only an extra $1,000 or so. And existing standardised app building software could do an OK job for even cheaper. Estimates from other developers range from a few thousand up to as much as $25,000 for a really class effort – and timeframes from as little as a month.

In 2011, with the sort of election budgets which the Labor and Liberal parties are throwing around, you would expect that they should at least have official party apps which gives updates on their activities, current policies, members of parliament and so on. It should be a basic cost of doing business in politics — as it is increasingly becoming for any corporation with a mass customer base.

The irony is that third party developers are already starting to build their own apps covering the major Australian political parties, in the vacuum left by their lack of self-directed efforts. One, Jing Jo Services, already has functional iPhone apps for both the Liberal and Labor parties, despite being associated with neither. The apps are quite serviceable, if noticeably devoid of the sort of build quality you would expect from a major organisation.

Politicians have long been renowned for their lack of awareness of how modern technology works. Yet I have a feeling that as the iPhone develops further and starts to completely dominate the mobile phone market in general, iPhone apps for politicians and political parties in Australia will become a necessity. Of course, by that stage everyone will need an Android app as well. But that’s a story for another day.

Delimiter will on Thursday this week launch its first eBook, listing and reviewing the best Australian iPhone apps under $5.