opinion If you were watching Australia’s technology industry closely this week, you would have noticed a disturbing pattern of events start to form around one of the nation’s largest technology companies.

Like a ghastly rough beast slouching its way towards the light, facts are beginning to simmer to the surface about what is really going on inside an ageing warhorse that has been fighting battle after corporate battle for so long that it has probably started to forget what it is really fighting for.

I refer, of course, to IBM.

The signs of trouble within IBM Australia have been apparent for some time. In fact, the story I am about to tell started in February, when it was revealed that Big Blue had once again started fighting a running battle with its own employees at its Baulkham Hills facility.

I’ve personally been out to the centre – commonly referred to as the ‘Flight Deck’ — once, several years ago during IBM’s last all-out war with its own staff in the facility. The facility, I believe, is an innocuous-looking building mostly hidden behind a grove of trees. But its innocent exterior belies the conflict that is currently reaching boiling point inside.

Over the past few months more and more details have come to light about just how unwilling IBM is to negotiate with its own staff at the Flight Deck on some form of collective agreement for the paltry amount of staff – just 80 – that work there.

If you believe the Australian Services Union – which, according to ballot papers released yesterday, represents at least 50 of the staff in the facility – then IBM has done everything in its power to refrain from negotiating with the union over a collective agreement – complying with what the union has claimed is a global policy of not negotiating with unions.

And the record of IBM’s court battle with the union in front of the Fair Work Australia tribunal certainly lend credence to that fact.

The way Big Blue’s legal team questioned its own staff appeared to be nothing short of torturous … its lawyers went to great extremes to make the company’s case that the union should not be allowed to represent the staff.

But if anyone thought IBM would take that move lying down, they had another think coming.

IBM’s response – just two and a half weeks later – was to sack some 19 staff at the Flight Deck, representing 25 percent of the workforce, with the union claiming the jobs would be shifted offshore. Yesterday the Flight Deck workers voted overwhelmingly to pursue a range of industrial action – including, if it comes to that, indefinite stoppages.

It’s not the first time IBM has suffered extensive problems with workers at the Baulkham Hills facility … the same sort of trouble was going on back in 2008. And there have been other examples of poor treatment of IBM staff over the years … such as the revelation in April 2009 that Big Blue had told staff it would no longer pay for tea or coffee for staff in its Australian offices.

The other IBM news which rocked Australia’s IT industry was contained in a devastating report published on Wednesday by the Queensland State Government’s Auditor-General Glenn Poole on the state’s payroll disaster at Queensland Health – a project for which IBM was the prime contractor.

Now don’t get me wrong … there is plenty of blame to be shared around in the report, and there is no doubt that both Queensland Health and government shared services provider CorpTech share quite a lot of responsibility alongside IBM for the debacle, which has left many Queensland Health staff without pay.

For starters, the report notes that there was confusion between the trio about each parties’ responsibilities, authority and accountabilities with regard to the project, resulting from what appeared to be a poor governance structure.

Queensland Health did not formally agree to the project’s initial scope, and negotiations over the scope took place over the life of the project – resulting in over 47 change requests – a problem that resulted from business requirements not being set clearly from the beginning of the project.

Nevertheless, one fact from the report really stuck in my mind all week as indicating, in my opinion, a very serious mistake on IBM’s part right at the beginning of the project.

It was envisaged, the audit of the project found, that the new Queensland Health payroll system would be based on what was believed to be a very similar implementation of SAP software at the state’s Department of Housing, with minimal changes required for Queensland Health. This is what IBM stated about the project in the initial statement of scope:

IBM’s understanding of the situation proved to be completely wrong. In fact, the events of the past six months in Queensland – which have led to serious political implications for the Government, including calls for the resignation of the Health Minister – have proven how disastrously wrong that understanding was.

And that should have been evident to IBM right from the start – no matter how detailed the briefings that it was provided with by Queensland Health and CorpTech.

What should have been apparent to IBM when the scope of the new payroll system was being drawn up was that Queenland Housing and Queensland Health are about as far apart in nature as two departments can be and still be within the same government.

IBM’s recommendation that the new system also use Infor’s Workbrain rostering system, I have no doubt, was intended to address this incredibly obvious issue somewhat. And certainly there is evidence that IBM went to great lengths to fix the mistake in scope after it realised it made it. But it does not explain why IBM staff believed that such a massive undertaking could ever cost it just $6.2 million to implement in the first place (in March 2010, it was estimated that IBM’s contract had blown out to $24 million … and the system still does not completely work).

After all, it’s not as if IBM couldn’t have known the risks.

Big Blue’s contract with Queensland was inked in December 2007. Just a few months before in that very year, Western Australia’s auditor-general had published a landmark report very much like the one that his Queensland counterpart Glenn Poole published this week.

In that report, WA auditor-general Colin Murphy lambasted Western Australia’s own shared corporate services project, which like Queensland’s, aimed to consolidate government financial and HR systems, for being two years late and more than $66 million over its previous $122 million budget. IBM wasn’t involved in the WA project — it was an Oracle-based project and more of the integration work was being done by the government.

But as in Queensland, the sticking point for the project was not the migration of the financial systems, but the migration of payroll systems. And – critically – Murphy had noted that part of the problem was that the complexity of the awards which governed public sector employees had been underestimated.

Now one of the disturbing thing to my mind about all of the events surrounding IBM this week was not that they happened. Other companies – Telstra comes to mind – have faced problems with unions and their staff. And other companies – Oracle, for example, was named in the WA Government’s report – have faced issued with implementing government projects, which notoriously go wrong often. 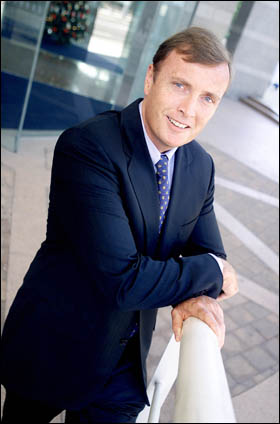 And yet this week IBM did not demonstrate as a company that it had an honest and sincere approach to these issues. Instead, two rather ironic press releases landed in my inbox lauding the company’s accomplishments.

The irony of the first – in which the Australian Computer Society announced that IBM Australia managing director Glen Boreham (pictured) had been appointed ambassador of National ICT Careers Week for 2010 (in a week in which some of his company’s highly trained and technical staff voted to pursue indefinite industrial action against his company) – must be apparent to all.

“For me, a career in ICT is about making a difference in the world. It’s about working with people, helping people, finding new and better ways of working,” said Boreham in the press release. “Helping the brightest and best coming into the workforce to realise that potential for possibility – the endless horizon”.

I bet that the Flight Deck staff couldn’t quite see that “endless horizon” when they were staring down the barrel of an IBM lawyer quizzing them in depth at the Fair Work Australia tribunal about how precisely they carried out critical backup duties … while paying for their own coffee.

The other statement – precisely one day after the Queensland Government publicly threatened to sever IBM’s contract to build Queensland Health a new payroll system and sue for damages – lauded IBM’s work on the Federal Government’s Standard Business Reporting project.

At the time IBM sent me the press release, I was a little too busy documenting Qld Premier Anna Bligh’s pledges to bring Big Blue to heel to sing its praises about its work on the SBR.

Now before anyone accuses me of demonising IBM, let’s not forget the company has had a stack of successes in Australia.

I have been particularly impressed by the energy Boreham and co have shown in dragging Australia’s governments and energy utilities into the new millennium over the past several years (even if IBM had somewhat of a self-interest in that process, and was broadly implementing a local marketing/lobbying policy set in the US), and of course we can’t forget that IBM was largely successful in its mission to help the Department of Immigration and Citizenship implement its mammoth Systems for People project.

IBM’s successes have probably been more legion than its failures … otherwise it would no doubt no longer be in business.

But just for right now, I would like to entreat IBM to stop and think about several things rather seriously. Is it treating its staff the right way? Are its processes for evaluating new work – such as Queensland Health’s payroll system – adequate?

And most of all … is it man enough to admit and learn from its mistakes?